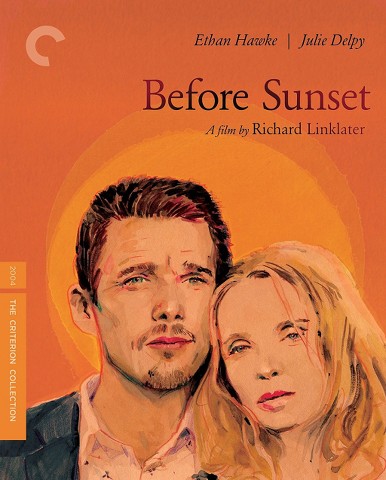 Quote:
It’s too long into “Before Sunset” that we see Jesse (Ethan Hawke) and Celine (Julie Delpy) reunited after nine years…and it’s only two or three minutes into the movie. In 1995, Hawke and Delpy starred as the characters in “Before Sunrise,” a film co-written and directed by Richard Linklater (“School of Rock,” “Waking Life”) about two 20-something students who meet on a train travelling across Europe, and spend an evening in Vienna just talking, making a connection that transcends mere physical attraction, though clearly one exists. At the end of “Sunrise,” they promise to meet up again in six months.

Nine years after that night together, they meet each other again in Paris, where Jesse is on the last stop of his European tour promoting the book he’s written about their night together, and Celine is now working as an environmental activist. They have about an hour before he has to catch his flight back to America, so they decide to spend it catching up with where their lives have taken them in the last decade.

What an intoxicating film! “Before Sunset”- like its’ equally-engrossing predecessor- is in love with language- the passion it illicits and allows to be released, the thirst it quenches in being genuinely listened to, and the feelings it stirs at its’ most provocative. As he did with co-writer Kim Krizan- who gets story credit on “Sunset”- on “Before Sunrise,” Linklater and his two actors have come up with dialogue that’s freewheeling in its’ delivery and so natural in its’ tone and style that you drink it up, and are simply spellbound as Linklater’s camera follows them through the beautiful, history-rich streets of Paris (and “Sunrise’s” Vienna) with an immediacy and clarity that makes it hard to keep your eyes off of Jesse and Celine (who also made an appearance in Linklater’s remarkable “Waking Life,” recalling “Sunrise’s” conversation).

Of course, it’s easy to keep your eyes on Jesse and Celine when their played by the likes of Ethan Hawke (an Oscar nominee for “Training Day”) and Julie Delpy (from Krzystzof Kieslowski’s “White”), but not only because both actors are good-looking. Nine years removed from Vienna, Jesse and Celine lack their youthful optimism about the world and love, as cynicism, disappointment, and responsibility have found their way into both character’s lives. They’re resigned in their lives as they are now, but they long to regain that feeling they had in that one night. Fans of the earlier film will be blessed to learn that while their characters are deeper and more mature than they were in “Sunrise,” Hawke and Delpy rekindle that unforgettable bond with performances of thoughtful nuance and tenderness. They clearly love these characters, and understand them fully. And because of that, we love them too. Hawke and Delpy will never be better than in these two films, and if the rumors of possible further “Before” encounters over the years are to be believed, you get the feeling they can live with that, and you leave “Before Sunset” wanting Linklater, Hawke, and Delpy to do just that.

If I sometimes sound like an obsessive fanboy in talking about both “Before Sunrise” and “Before Sunset,” consider this- I just watched “Before Sunrise” for the first time about a month ago. One month ago. I first became aware of- and intrigued by- “Before Sunrise” back in 1998 (though I’m sure I first heard about it around its’ 1995 release) when- in an interview with Newsweek- the late, great film critic Pauline Kael said this about the film (in response to the question “Have you enjoyed any of the low-budget movies?”), “And ‘Before Sunrise,’ which is one of the best movies about the romance of people in their early 20s discovering intellectual soulmates.” (Author’s Note: The other film Ms. Kael mentioned in her answer was “The Whole Wide World,” with Vincent D’Onofrio and Renee Zellweger. Long-time readers might know that “World” is one of my 10 all-time favorite films.) Though I rented the movie a few years back, I never got to watching it before I had to return it, and it took hearing about “Before Sunset”- and its’ impending release- to finally make me put it at the top of my Netflix rental list.

Is the film that good to illicit such a passionate reaction? I thought so (I’d been hunting “Sunrise” down on DVD ever since, and finally found it August 4). What Linklater and the actors achieve in both films is miraculous- they make talking feel so alive, and realize how vital it is to communicate to another human being on such a personal level beyond just saying “Hi” once in a while. Watching “Before Sunset,” I was reminded of an interaction in “Waking Life” (another Linklater film where communication and dialogue feels vibrant and essential)- as they pass on a stairway, a woman tells the dreaming protagonist (Wiley Wiggins), “Hey. Could we do that again? I know we haven’t met, but I don’t want to be an ant. You know? I mean, it’s like we go through life with our antennas bouncing off one another, continously on ant autopilot, with nothing really human required of us. Stop. Go. Walk here. Drive there. All action basically for survival. All communication simply to keep this ant colony buzzing along in an efficient, polite manner. ‘Here’s your change.’ ‘Paper or plastic?’ ‘Credit or debit?’ ‘You want ketchup with that?’ I don’t want a straw. I want real human moments. I want to see you. I want you to see me. I don’t want to give that up. I don’t want to be ant, you know?”

In an age where communication and interaction has become so impersonal via email, voice mail, and technology, no message is more relevent. On that basis, and even taken on their own terms, “Before Sunrise” and “Before Sunset” should be treasured. 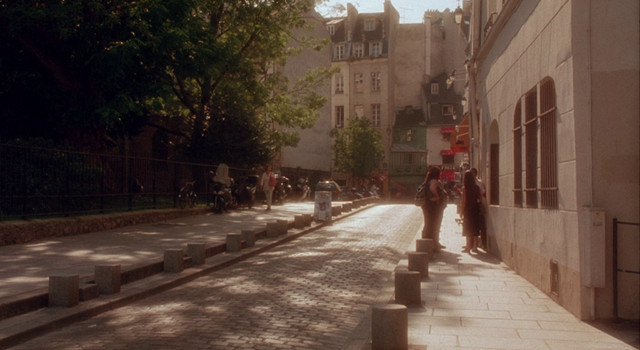 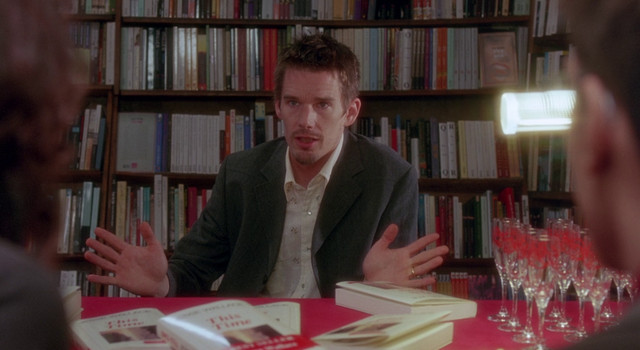 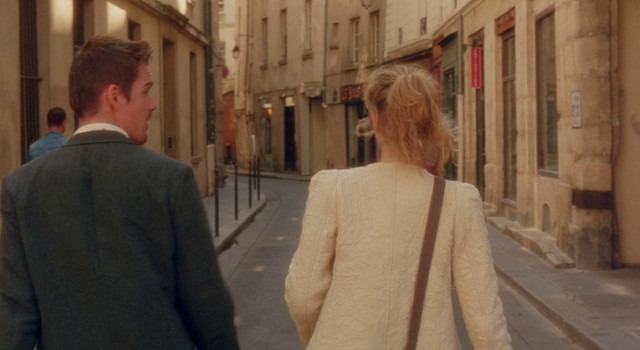 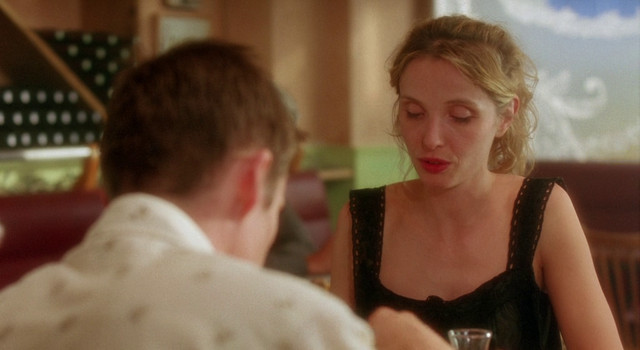 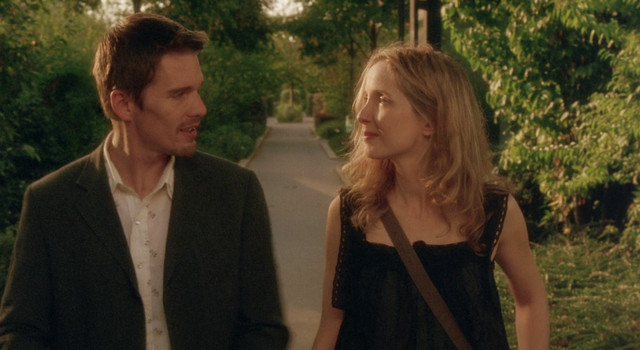 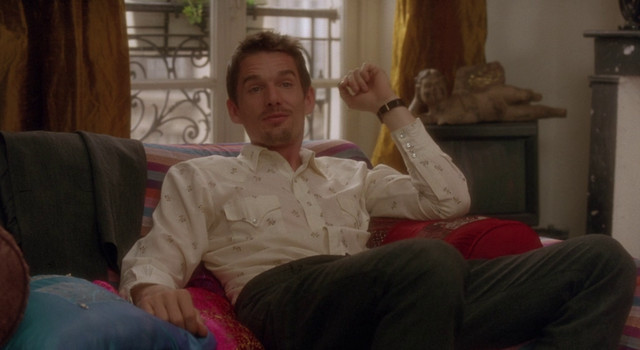 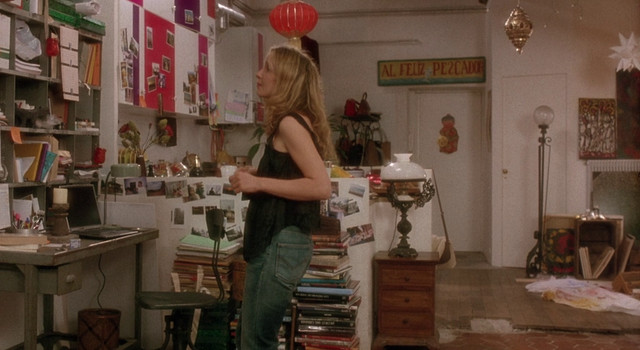