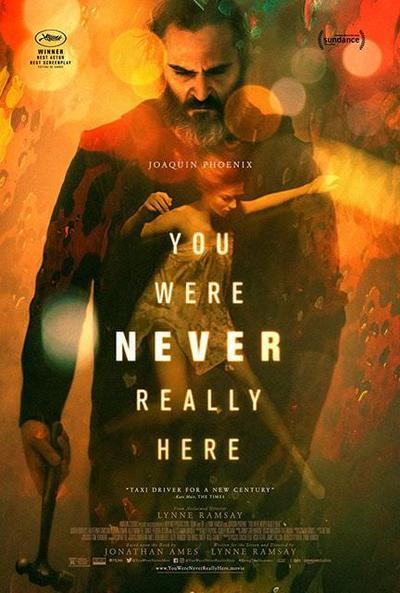 Synopsis:
Balancing between feverish dreamlike hallucinations of a tormented past and a grim disoriented reality, the grizzled Joe–a traumatised Gulf War veteran and now an unflinching hired gun who lives with his frail elderly mother–has just finished successfully yet another job. With an infernal reputation of being a brutal man of results, the specialised in recovering missing teens enforcer will embark on a blood-drenched rescue mission, when Nina, the innocent 13-year-old daughter of an ambitious New York senator, never returns home. But amidst half-baked leads and a desperate desire to shake off his shoulders the heavy burden of a personal hell, Joe’s frenzied plummet into the depths of Tartarus is inevitable, and every step Joe takes to flee the pain, brings him closer to the horrors of insanity. In the end, what is real, and what is a dream? Can there be a new chapter in Joe’s life when he keeps running around in circles?

Review:
Abuse can be tricky to evoke onscreen with directors often so desperate to recreate the visceral aspects that they voyeuristically dive in. Lynne Ramsay gives a masterclass in mood setting at the start of this taut thriller, using suggestive camerawork paired with a nerve-jangling score by Radiohead’s Jonny Greenwood to feel the horror of (a double) assault that we do not see – a personalised girl’s necklace all we need to see to know what territory we’re in. One incident appears to be a recollection of the recent past, another like a far-off remembered nightmare in the mind of hitman Joe (Joaquin Phoenix), who we immediately learn has suicidal tendencies as he battles for breath from inside a plastic bag.

And though this film has the sort of plot that launched a thousand thrillers – hired gun goes on hunt for missing girl and becomes embroiled in a much bigger story – there is nothing formulaic about Ramsay’s imagining, as she focuses on the psychological inner workings of her central character’s brain, even as the violence rages around him. Joe may set about the task of killing people with a hammer and brutal efficiency but his mind is a sea of fragmented thoughts, that we swim in and out of with him – water imagery also abounds. Like her previous film, We Need To Talk About Kevin, this is less about a standard narrative than about a person scouring their soul for guilt at the same time as going through the daily motions. Ramsay pulls back from the violence, showing us occasional glimpses, mostly aftermath, all of which further suggests just how routine this has become for Joe while proving our guts can still feel a punch that our eyes cannot see.
Copy picture

Phoenix – who has arguably never been better – sets out his stall as a full array of damaged goods. Scenes in which his deep care for his elderly infirm mother (Judith Roberts) is heartbreakingly evident – in particular a cracked duet of A, You’re Adorable – make his life of violence all the more tragic, as though he’s still as trapped as he was in the fractured moments we see from his childhood; despite no longer being powerless, he is still caught up in an unending torrent of muddled anger and despair. Sometimes it seems he sees dead people, at others you wonder if perhaps it is he who is the ghost.

Nothing plays out as you expect, with Ramsay maintaining an unsettling staccato that keeps both the action and the viewer on edge. Her use of humour sometimes leavens the moment and, at others cuts like a knife. It’s safe to say that after this, you’re likely to be consigning Charlene’s I’ve Never Been To Me to the same awkward ‘uneasy listening’ place in your record collection occupied by Steeler’s Wheel’s Stuck In The Middle With You after Reservoir Dogs.

Even when we meet Nina (Ekaterina Samsonov) the girl he intends to save, it becomes less an encounter between saviour and victim than a strange meeting of minds between two lost souls that somehow see themselves reflected. As Ramsay and Phoenix burrow deeper into the psyche of Joe, the mood intensifies – and it is us who find ourselves struggling to breath.