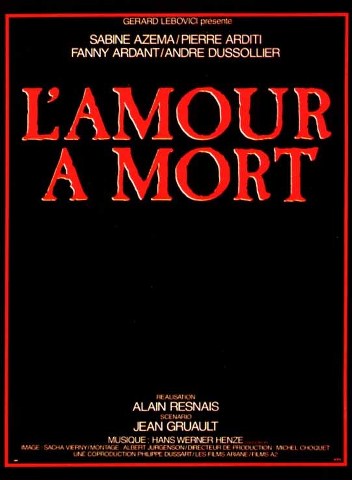 L’Amour à Mort (Love Unto Death) is one of the more difficult Resnais films of the 80s. Featuring a core of actors from La Vie Est un Roman who would also go on to make Mélo (and are still working with Resnais on his most recent films), the film has a chamber mood, an enclosed and tightly constructed meditation on two complex subjects – love and death.

Elisabeth (Sabine Azéma) and Simon (Pierre Arditi) have been together as a couple for only a few months when Simon dies. To everyone’s surprise he revives after a few minutes and appears to be quite healthy again. The couple’s relationship appears to become more intense, but Simon is unable to come to terms with his near-death experience, feeling an irresistible desire to withdraw from life. Their friends, a married couple of Protestant pastors, Judith (Fanny Ardant) and Jérôme (André Dussollier) try to rationalise how Simon and Elisabeth must feel, offering guidance and consolation through theological and philosophical discussions, but the couple are beyond the reach of human understanding or explanation, and the pervasive and persuasive music of ‘the other’, of a love beyond death, exerts an irresistible attraction.

Constantly searching for a new form of expression, expanding on and even defying traditional cinema techniques, Resnais turned to composer Hans Werner Henze to create musical pieces for the film, not as a soundtrack to underline the emotions of the characters, but as scenes in themselves, telling part of the story that cannot be described or illustrated with images – Simon’s death, and the confusion and turmoil of emotions that his near-death experience has filled him with.

The film is relentlessly bleak and sombre in tone – there is no let-up from the dark and morbid reflections on death and suicide. Love itself is examined, but only under the shadow of death – love unto death, love beyond death, as the films title implies. The tone of the film is influenced strongly by the music which appears in fragments between scenes, set against a dark background with occasional images of falling snow. Between this, the anguish of Simon and Elisabeth and the philosophical meditations on love and death from Judith and Jérôme, this is not easy viewing and offers no easy answers.