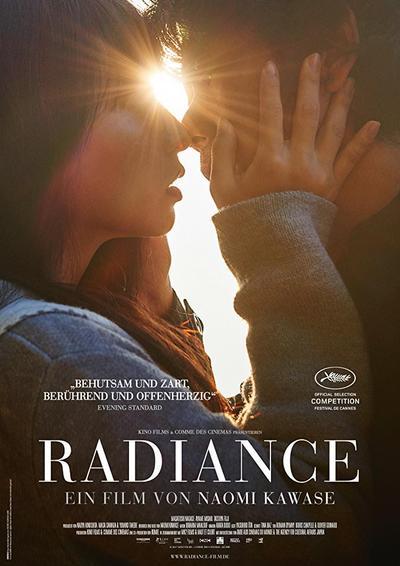 Quote:
A passionate writer of film versions for the visually impaired meets an older photographer who is slowly losing his eyesight

In 1997, Naomi Kawase became the youngest winner of the Camera d’Or for her first feature Suzaku. She has returned seven times in total and this year enters the main competition for the fifth time with Radiance, a thoughtful meditation on seeing and cinema.

Misako (Ayame Misaki) works for a company that provides audio description tracks for movies. She appears to be well cut out for the work, audio describing a little as she walks down the street. The film they are working on looks much like a film Kawase herself might have directed. It features an old man letting go of his dying wife and having to go on without her. Misako’s work gets presented to a focus group of the blind or partially sighted, who critique it or make suggestions. Her harshest critic is Nakamori (Masatoshi Nagase), a photographer who has almost totally lost his sight, yet still tries to hang on to the fragments of a seeing life. He carries around his camera and uses a magnifier to keep up with his work. His resentment fuels his criticisms of Misako, but gradually the two begin to understand each other better, and something like a romance forms.

The visual beauty on display will comes as no surprise for those familiar with Kawase’s slightly dreamy aesthetic. The vibrancy of the city is offset by the tranquility of Misako’s occasional visits to her mother’s village in the countryside. Here, her mother’s health is declining and a mystery is also introduced as Misako’s father has disappeared – a Japanese social phenomenon documented in Shohei Imamura’s mesmerising A Man Vanishes – leaving only his wallet behind and a photograph that has been taken in the same location as one of Nakamori’s photographs.

The film-within-a-film, meanwhile, intrigues Misako that she even interviews the director to find out how she should interpret the piece. In a way her job is about how to watch cinema. She is told to describe the action, the location and the characters accurately but also to allow space for the audience to use their imagination. She also has to avoid imposing a subjective reading. When a character looks into the sunset, she comments that he is full of hope. It’s difficult not to assume that this is Kawase’s own view and Radiance perseveres with its gentle optimism despite Nakamori’s anger and his gradually worsening vision.

There are some problems. Misako seems bizarrely unprepared to do a job she has been doing for some time and the endless consultations for what looks like a fairly mediocre piece of arthouse can’t make much financial sense to the small company. What’s more, her vision of cinema and Nakamori’s musing on photography – “I am a hunter and time is my prey.” – can sound like banality wearing pompous pants. Still, fans of Kawase will likely enjoy this delicate tale of people finding their way in the dark.