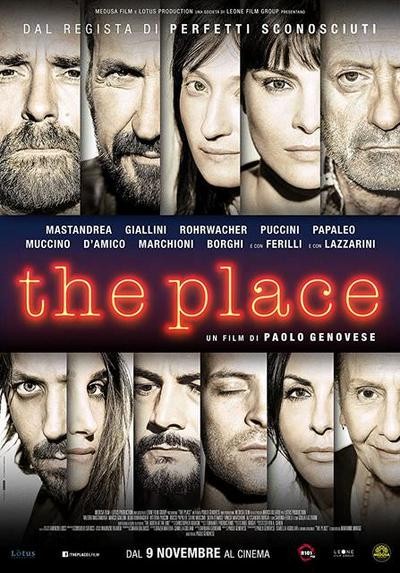 Synopsis:
The fates of an apparently random group of strangers who each come into contact with a mysterious figure who they believe possesses the power to grant any wish, in return for which they must carry out a task he assigns them.

Review:
It’s been one of the most anticipated films of the season. Following the overwhelming success of Perfect Strangers, Paolo Genovese was in a position to do something daring and that he did, pulling an ambitious and metaphorical film out of his hat, which may not be for everyone, but in which he truly leaves comedy behind for the first time. Presented at the closing of the 12th Rome Film Fest, The Place is the title of the film and the name of the bar, lit up in a glorious neon sign, where a man sits, always at the same table, and where 10 characters come and go, every day, at all hours, to meet and talk to him. A dialogue film, a test for its actors, and a conceptual “huis clos,” which asks the audience one single yet weighty question: how far would you go to get what you want?

If Perfect Strangers investigated the darkest sides of those who move among us, The Place scandalises the black souls that live within us. The man sitting at the bar, day and night (brought to life by Valerio Mastandrea), gives directions to people who turn to him for advice on how to achieve their own desires, signing a real-life contract with them. To become more beautiful, to spend a night with a porn star, to save a son, to regain sight, and to find God, are just some of the wishes that the various characters in the film reveal to the man at the bar. “It can be done,” he answers as he writes quickly in his large planner, filled with notes in every corner of every page. But there is a price. A price that is very high in some cases: stealing a large sum of money, putting a bomb in a room, raping a woman… If the task is assigned, success is guaranteed. It will be up to them to decide whether or not to accept the agreement.

Genovese’s film is an adaptation of the 2010 American television series, The Booth at the End, adding some characters, removing others, interweaving their stories and finding an appropriate ending for each of them (the screenplay was written by the director with Isabella Aguilar). We follow the progress of the assigned tasks, the characters appear in front of the man punctually to update him (“give me the details,” he repeats to each of them), we look for hesitations, second thoughts, but there are also those who lie, who go beyond the established limits, in a whirlwind of human degeneration from which, however, there’s always time to escape, you just have to want to. The director varies the shots as much as possible, filming the actors from every angle, but he is somewhat unable to avoid certain repetitions in gestures, movements, character dynamics, which in the original serial format (12-minute installments) is perhaps more digestible than in a 90-minute film. Genovese however confirms that he is a brave director in search of new territory, and as in Perfect Strangers, he pushes the audience to question things, sending us home with a dilemma in our heads: what would I do in their situation?