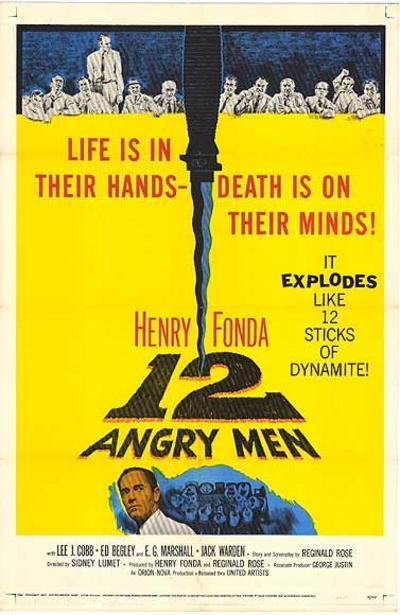 SYNOPSIS
A Puerto Rican youth is on trial for murder, accused of knifing his father to death. The twelve jurors retire to the jury room, having been admonished that the defendant is innocent until proven guilty beyond a reasonable doubt. Eleven of the jurors vote for conviction, each for reasons of his own. The sole holdout is Juror #8, played by Henry Fonda. As Fonda persuades the weary jurors to re-examine the evidence, we learn the backstory of each man. Juror #3 (Lee J. Cobb), a bullying self-made man, has estranged himself from his own son. Juror #7 (Jack Warden) has an ingrained mistrust of foreigners; so, to a lesser extent, does Juror #6 (Edward Binns). Jurors #10 (Ed Begley) and #11 (George Voskovec), so certain of the infallibility of the Law, assume that if the boy was arrested, he must be guilty. Juror #4 (E.G. Marshall) is an advocate of dispassionate deductive reasoning. Juror #5 (Jack Klugman), like the defendant a product of “the streets,” hopes that his guilty vote will distance himself from his past. Juror #12 (Robert Webber), an advertising man, doesn’t understand anything that he can’t package and market. And Jurors #1 (Martin Balsam), #2 (John Fiedler) and #9 (Joseph Sweeney), anxious not to make waves, “go with the flow.” The excruciatingly hot day drags into an even hotter night; still, Fonda chips away at the guilty verdict, insisting that his fellow jurors bear in mind those words “reasonable doubt.” A pet project of Henry Fonda’s, Twelve Angry Men was his only foray into film production; the actor’s partner in this venture was Reginald Rose, who wrote the 1954 television play on which the film was based. Carried over from the TV version was director Sidney Lumet, here making his feature-film debut. A flop when it first came out (surprisingly, since it cost almost nothing to make), Twelve Angry Men holds up beautifully when seen today. It was remade for television in 1997 by director William Friedkin with Jack Lemmon and George C. Scott.
Hal Erickson on All Movie Guide

Sidney Lumet’s directorial debut is a snapshot of the American judicial system in action. Twelve average New York males convene in a very small jury room on a very hot day in order to reach a verdict in a murder trial. Almost everyone wants to vote guilty and get on with their lives except for Juror No. 8 (Henry Fonda), a conscientious citizen who insists on establishing reasonable doubt. Arguments are made, cigarettes are smoked, murder weapons examined, diagrams drawn, and prejudices revealed. Firm opinions weaken and reverse; voices get raised, the clock ticks, and a ghetto kid’s life hangs in the balance. Lumet’s direction and camerawork steadily builds pressure into the plot. Things start out casual, but wind up so close and tight you can count the pores on the actors’ noses. Fonda is good in a role well-suited to his extra-large sense of human dignity but the stealth giant in this actors dozen is the ferocious Lee J. Cobb. Jack Klugman, E.G. Marshall, Martin Balsam, Ed Begley, and Jack Warden play some of the other jurors, and a better assemblage of grizzled method actors shouting at each other won’t likely come again. 12 ANGRY MEN was originally written for television, it is a true classic of the anti-McCarthy message era, and is not to be missed.
Rotten Tomatoes

REVIEWS
Twelve Angry Men is a tightly wound top of a movie. Each scene ratchets up the tension another notch as Henry Fonda’s character tries desperately to open the minds of his fellow jurors. The setting — a claustrophobic jury room in the dog days of summer — superbly augments the suspense. Operating within the constraints of a small budget, first-time director Sidney Lumet tightens the noose by accentuating the throbbing pulse of the ceiling fan and slowly narrowing his shots on his characters as the film approaches its climax. Based on Reginald Rose’s well-known play, which had been adapted to the television screen three years earlier, Twelve Angry Men boasts a series of excellent performances by young actors who would soon become household names, including Jack Klugman, Jack Warden, and Martin Balsam. However, it is the film’s established stars — Lee J. Cobb, E. G. Marshall and most importantly Fonda — who play the leads, delivering the goods like seasoned pros. The film has instructional value as a study of the inherent strengths and weaknesses of the jury system, but its real value is how it allows each member of the cultural mosaic of a jury to develop into distinct, damaged, and interesting characters. In a well-crafted metaphor for the broader outline of society, the jury members must confront their prejudices in order to see that justice prevails. Nominated for three Oscars, Twelve Angry Men ran into the juggernaut of Bridge on the River Kwai and came up empty handed.
Dan Jardine on All Movie Guide

Eleven jurors are convinced that the defendant is guilty of murder. The twelfth has no doubt of his innocence. How can this one man steer the others toward the same conclusion? It’s a cast of seemingly overwhelming evidence against a teenager accused of killing his father in “one of the best pictures ever made” (The Hollywood Reporter).
Play.com 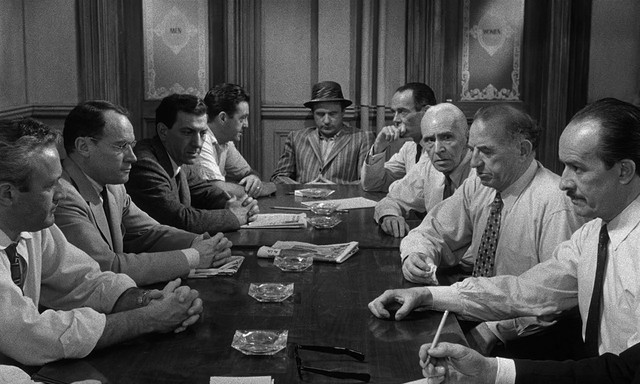 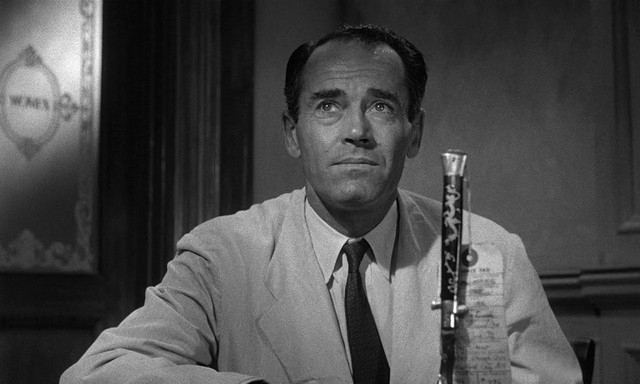 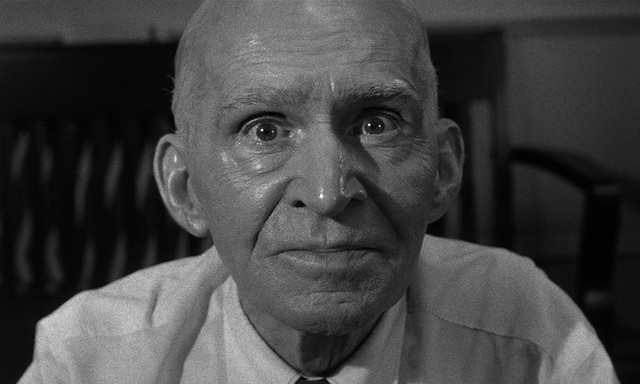 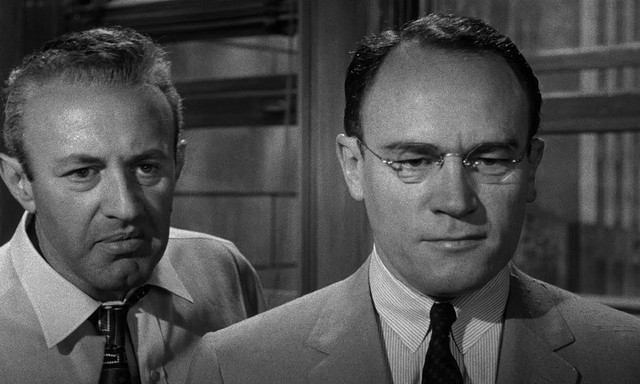 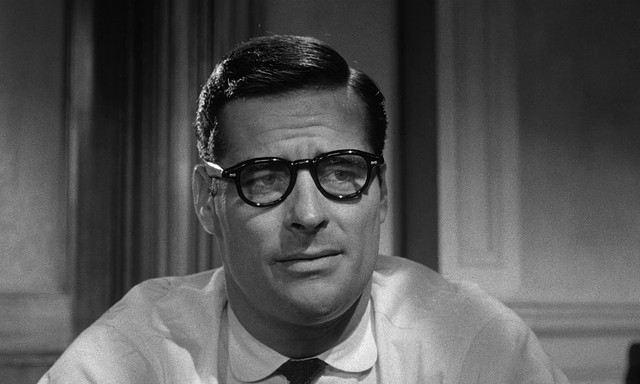 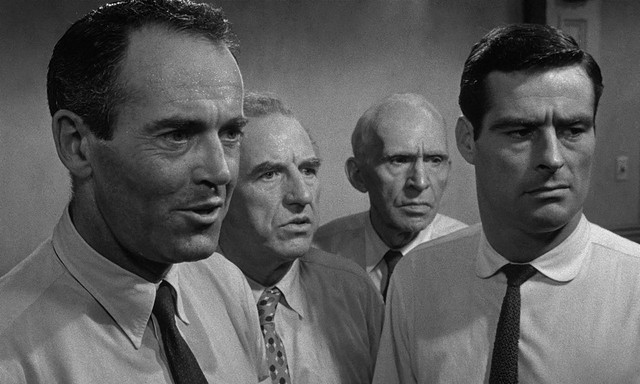 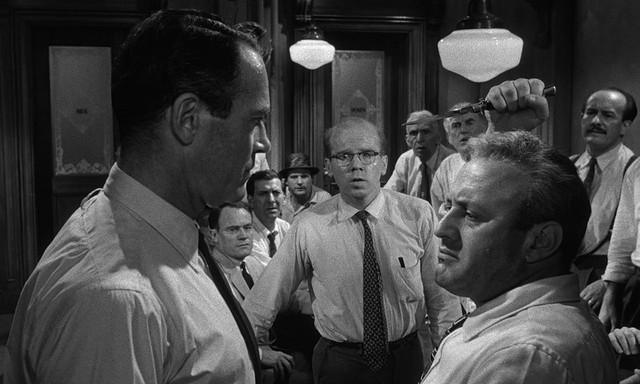