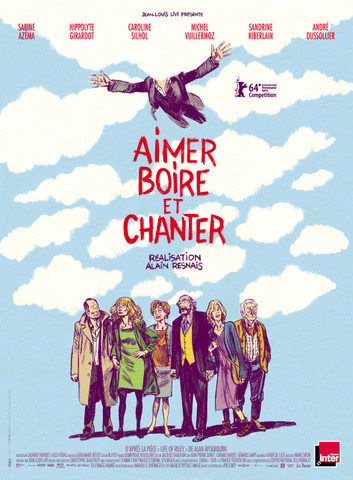 Quote:
In the midst of rehearsals for a new play, amateur dramatics proponents Colin and Kathryn receive the shattering news that their friend George is fatally ill and only has a few months to live. Life begins to come apart at the seams – not just for Kathryn, who was once George’s partner, but also for her friends Tamara and Monica. The full force of the emotional turmoil they experienced in their youth and their long-buried dreams are rekindled. Much to the chagrin of their respectable, middle-class husbands, the women begin to argue about which of them should be allowed to accompany George on a final journey …

After Smoking/No Smoking (1993) and Coeurs (2006), this current work marks the third time French cinema doyen Alain Resnais has chosen to adapt a stage play by British playwright Alan Ayckbourn. By confining the action to an artificial, almost entirely studio-bound world, he succeeds in creating a tragicomic theatre of vanities. Employing the ironic distance of a sage observer of human nature, Resnais ponders the power of love and desire and in doing so enables his characters, driven by their longings, hopes and obsessions, to leave the beaten track for once.