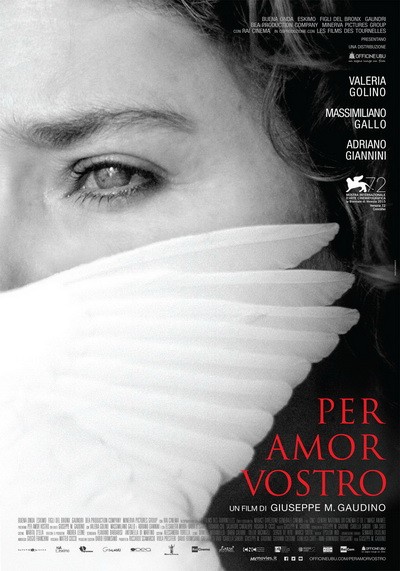 The film is built around Anna (Valeria Golino), a woman who has become so disconnected from life she can only see in grey. She works as a television show prompter, and is by all accounts pretty good at her job. She also has a comfortable existence and several children who love her. The same cannot be said for Anna’s husband Gigi (Massimiliano Gallo). An unscrupulous loan shark, he spends his days screaming abuse at her and their deaf-mute son Arturo (Edoardo Crò) before heading out to ruin the lives of the desperate.

Quote:
Anna is a woman nearing 50. She’s both frail and tough, obsessed with family problems: her elderly parents strapped for cash, her unemployed brother and one of the three siblings, Arturo, a deaf mute, with all the baggage that comes with the disability. At last Anna’s longed-for job arrives, working on the set of a TV fiction as a “prompter”: she copies out the cues on large sheets of paper that she shows to the actors while they rehearse (in jargon a “teleprompter” who gives “autocues”).

However Anna is not at peace, she sees the world in black and white, a painful past behind her that influences her life. Nightmares and visions besiege her regularly: a black sea that grows rough, while foreboding clouds descend upon it; the bus she takes to go home is filled with Dante-esque restless souls and then the water that quickly encircles her… Anna doesn’t want to see the reality that surrounds her, her violent husband (Massimiliano Gallo) who brings home so much money from who knows where. That’s why the woman accepts the advances of actor (Adriano Giannini) who makes her feel loved and appreciated at last.

Almost twenty years since Giro di lune tra terra e mare (1997), his only fiction feature among a number of mainly documentary-style works, Beppe Gaudino overcomes a huge number of difficulties and puts together a network of independent producers – Buena Onda, Eskimo, Figli del Bronx, Gaundri, Bea Production Company, Minerva, with the French co-production by Les Films des Tournelles – to make a movie that portrays and spreads his “rich and complex” imaginary, as Valeria Golino suitably defined it. Many things converge within Per amor vostro: the Neapolitan music tradition the Epsilon Indi, who mix popular and electronic music in a wonderful project that runs through the whole film; painting with the digital painting technique that the director applies to the film’s frames in a kaleidoscope of images; iconography and religious culture in the Mediterranean, with it’s somewhat dazzling accompaniment of colours, revered Virgin Marys, angels and skulls; the geography of Naples, which the director’s focus extends from the Fontanelle cemetery, below Capodimonte, to Rione Sanità, from the Purgatorio ad Arco church to the Catacombs of San Gaudioso. And there’s the total humanity of the protagonist, a woman crying out for love, whose eyes have a shallow depth of field that the focal lenses used by the director of photography Matteo Cocco capture effectively.