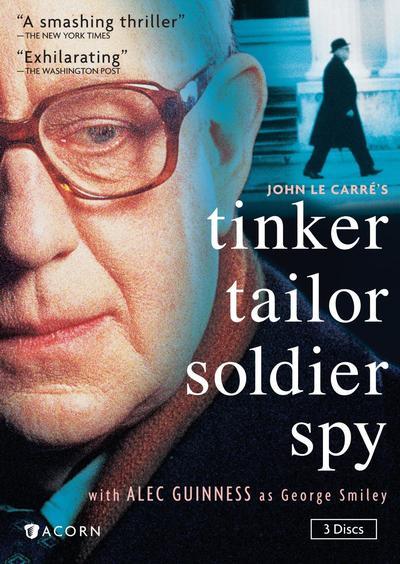 Complex but compelling, this miniseries is based upon one of John Le Carré’s greatest works and serves as a grand summing-up for the late Sir Alec Guinness, one of Britain’s greatest actors. Guinness literally is Smiley: Le Carré said that Guinness served as a template for the character’s cunning and mournful rectitude. In anyone else’s hands, Smiley might have seemed a blank and lifeless character, but Guinness’ matchless ability to play within a scene while seeming to think well beyond it is magnetic. Guinness was the great everyman and underplayer of the generation that gave us such great British Shakespearean actors as Olivier, Richardson, and Gielgud. He’s helped, too, by sharp dialogue lifted almost word-for-word from the book and terrific supporting performances (particularly an entirely silent but amazingly communicative Patrick Stewart, who has a cameo as Karla), which almost entirely obscure the fact that the miniseries largely consists of people sitting in rooms talking. It’s a literate treat that brings to life the gray morality and conflicting loyalties of the Cold War. Be advised: viewers can get lost in the intricate plot if they don’t pay close attention.
— Nick Sambides, Jr.

Living a premature and somewhat humbling retirement, elderly British spy George Smiley (Alec Guinness) is abruptly resurrected by his former boss Lacon (Anthony Bate) with an ultra-secret mission: find the double agent in the ranks of the British Secret Service. Is it the pompous head of service, Percy Alleline (Michael Aldridge)? The blowsy Bland (Terence Rigby)? The shifty Toby Esterhase (Bernard Hepdon)? Or perhaps the urbane Bill Haydon (Ian Richardson)? Pushed into retirement by a scandal caused by the now-deceased head of service, Control (Alexander Knox), and because he suspected that there was a spy, Smiley journeys through the labyrinthine world of the British spy service layer by layer as he hunts the mole controlled by the mysterious Russian spymaster Karla (Patrick Stewart). Taken from a best-selling novel by internationally famed novelist John Le Carré, this nearly five-hour miniseries was first broadcast by the BBC. The story is loosely based on the infamous Kim Philby spy scandal of the early ’60s.
— Nick Sambides, Jr.