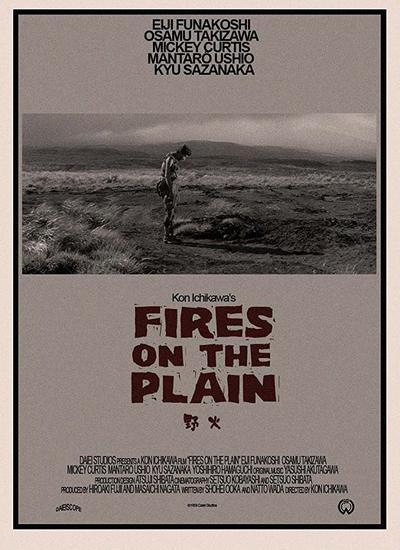 Quote:
Fires on the Plain opens to a harsh and unexpectedly cruel act, as Tamura (Eiji Funakoshi) is struck in the face by his commanding officer for returning to his under-provisioned and demoralized regiment. Suffering from tuberculosis, Tamura had been sent to a field hospital in Leyte in order to avoid taxing their limited supplies. Tamura is sent away again – this time, with a handful of tubers and a hand grenade. If the hospital still refuses to admit him, the officer explains that it is his duty to serve the Imperial Army by committing suicide. As Tamura makes his way towards the field hospital, he is unnerved by the appearance of smoke emanating from isolated, contained fires along the Filipino countryside, and changes his route in order to avoid them.
Upon reaching the hospital, Tamura is quickly introduced to the basest instincts of human behavior when he meets an opportunistic, injured soldier named Yasuda (Osamu Takizawa) and his obliging assistant, Nagamatsu (Mickey Curtis), who exploit the dire situation by bartering tobacco leaves with patients. The following day, Tamura recounts his observations of the bonfires to other soldiers, who are equally confounded by their significance, and the soldiers conjecture that the fires are signal fires sent out by American soldiers or local guerillas. The idea seemingly takes on validity when an air raid destroys the hospital, but Tamura escapes the carnage. As Tamura continues on his undefined journey, he encounters an isolated group of soldiers whose final orders are to march to a distant reconnaissance area in Palompon for evacuation to Cebu. Tamura warns the soldiers about the signal fires, but an officer explains that the unknown phenomenon is actually the result of villagers burning corn husks after the harvest: “They do it at home, too. Only fires on the plain”. Tamura is reassured by the hopeful idea of the peasants continuing the ritual of their simple life, uncorrupted by ravages of war. However, as their evacuation route becomes impassable, and the stranded soldiers succumb to even more unspeakable acts, can Tamura’s humanity persevere in the face of nihilism and despair?

Kon Ichikawa depicts a harrowing portrait of dehumanization and barbarism in Fires on the Plain. Through indelible images of austerity and profound hardship, Ichikawa depicts man’s instinct for survival as a metaphor for the innate struggle of the soul to retain human dignity through the madness of war. In contrast to the noble ideal of patriotic duty, Ichikawa presents the act of killing as a manifestation of base and primal behavior: envy, revenge, self-defense, and in the end, cannibalism. Inevitably, the hope of returning to the the tranquility of civilization after the devastation of war proves to be an illusion. Like the mysterious fires on the plain, war is also an inhuman atrocity that destroys all traces of a once simple ritual of existence.