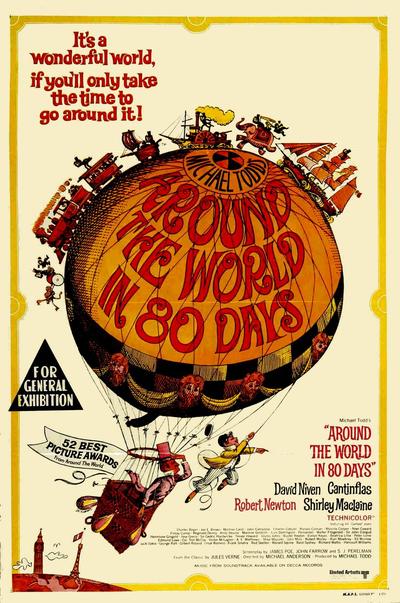 English nobleman Phileas Fogg, a very strict and emotionless man, gets
wound up in a bet at his gentlemen’s club: He has to prove that it is
possible to travel around the whole world in only 80 days. Together with
his new butler Passepartout, who expected a different first day at work,
he takes off instantly to Paris, where they miss the train to
Marseilles. But a travel agent called Thomas Cook offers them his
captive balloon, which carries them to Spain instead. Passepartout’s
skills are necessary in a bullfight in order to get them a ship that
should take them back onto their planned route. An ominous Mr. Fix
starts crossing their path more and more often, he somehow seems to try
to hinder their forthcoming. In the deep jungles of India, the butler’s
skills are again needed in a case of rescuing beautiful Princess Aouda,
who is to be burnt alive at the side of her dead husband. In Hongkong,
Passepartout meets drugs in a involuntarily manner and in the United
States, the wild, wild west takes its toll. All the time, Mr. Fogg has
his usual timetable and meal schedule running at normal pace, so that
all the waves have to be broken by Passepartout. And he won’t get paid
much, because he left the gas running, back in London. When the journey
comes to a dramatic returning to England, Mr. Fogg has to cope with the
facts that he seems to have lost the bet by some hours, but gained
something he never seemed to have: emotion.