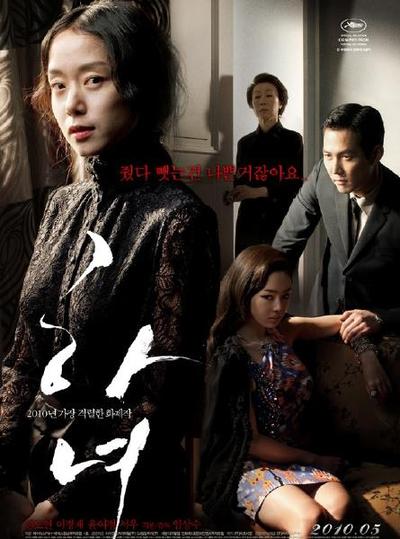 Award-winning actress Jeon Do Yeon stars as poor divorcee Eun Yi, who gladly signs on to work as a nanny and housemaid for a wealthy, upper-crust family. In her naive eyes, the rich and handsome Hoon (Lee Jung Jae, Typhoon), his pregnant wife Hae Ra (Seo Woo, Paju), and adorable daughter (Ahn Seo Hyun) make the picture-perfect family. But that myth is soon shattered when the domineering Hoon finds his way to her bed. Their torrid affair upsets the balance of the household, unleashing a cruel power struggle as Hae Ra, her mother (Park Ji Young), and the head housekeeper (Yoon Yeo Jung) all answer with their own calculated measures.

Kim Ki Young’s 1960 classic The Housemaid is widely regarded as one of the best Korean films ever made. Fifty years later, acclaimed filmmaker Im Sang Soo brings the thriller to screen again with a highly anticipated remake that has garnered both critical acclaim and huge box office. Invited to the Cannes and Berlin Film Festivals, the 2010 retelling of The Housemaid magnifies the lust, manipulation, and domestic power struggle of the original into a full-blown erotic psycho-thriller. While Kim Ki Young’s Housemaid saw the unraveling of a middle-class family in the hands of a femme fatale maid, Im reverses and subverts the story by sending an innocent housemaid into the lion’s lair and witnessing her abuse and transformation amid the cold and cavernous beauty of the palatial mansion.