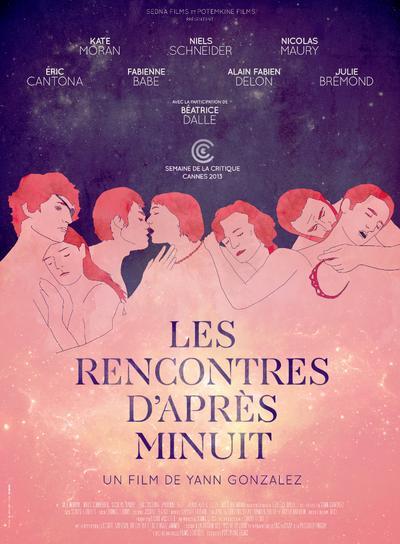 Definitely too experimental for widespread art-house play, Night should nonetheless find solid festival bookings, as well as niche theatrical play, following its out of competition premiere in the Critics’ Week. Above all, it will establish Gonzalez, whose well-regarded shorts (Entracte, Three Celestial Bodies) have already played various Cannes sidebars, as a bold new director to look out for.

Without further ado, we’re quickly introduced to the young Ali (talented American actress Kate Moran) and her beau Matthias (Niels Schneider, Heartbeats), who await the night’s events along with their uber-queer man-maid, Udo (Nicolas Maury, delivering some of the script’s best lines). One by one the guests arrive: first there’s The Slut (Julie Bremond), then The Stud (Cantona), The Teen (Alain Rabien Delon, son of the great Alain Delon) and finally, The Star (Fanienne Babe, Thieves).

If these all sound like clichés, that’s the point, and Gonzalez uses a structure similar to the 1985 John Hughes comedy, with the characters gradually laying themselves bare (sometimes literally) as the stereotypes tumble and their true natures are revealed. Yet the director also has something quite different in mind, and as the action moves more and more into fantasy mode, Night ultimately becomes less of a character study—which sometimes makes it drag at 90 minutes—than a sexually infused journey into the nature of storytelling, myths and film form itself.

The latter aspect is clearly where the movie succeeds most, with Gonzalez employing a number of deliberately fake studio techniques (day for night, rear-screen projection, a painted sunset) to amplify the artificial nature of both the settings and subject matter, resulting in several bewitchingly beautiful sequences, particularly in the dreams and flashbacks.

Elegant cinematography from Simon Beaufils, overtly kitschy sets from Sidney Dubois, and an electro score from M83 that evokes both Vangelis and Daft Punk, make for an impressive tech package that winds up gets much mileage out of limited means.