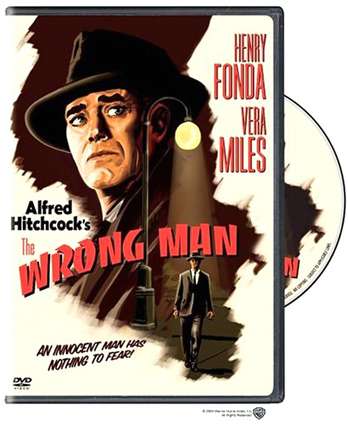 Synopsis:
Manny Ballestero is an honest hardworking musician at New York’s Stork Club. When his wife needs money for dental treatment, Manny goes to the local insurance office to borrow on her policy. Employees at the office mistake him for a hold-up man who robbed them the year before and the police are called. The film tells the true story of what happened to Manny and his family.

Review:
Hitchcock’s long-standing fear of the police is what originally attracted him to a newspaper account of a family man wrongly identified as an armed robber. The Wrong Man pays scrupulous attention to such things as the details of police procedure and the eventual apprehension of the real culprit – before the conviction of the wrongly accused man (Fonda), but after the stress has driven his wife (Miles) to mental breakdown. The result is Hitchcock’s most sombre film, unrelieved by his usual macabre humour; the black-and-white photography and the persecuted Fonda’s sharply chiselled features lend an impressive documentary feel. It’s not generally rated among the master’s best works, largely because of the intractability of the source material (or Hitchcock’s unwillingness to dramatise the events). But there’s still plenty here for Hitchcockophiles: a Jesuitical strain (the man happened to be a devout Catholic), a complicity of guilt (as the wife irrationally comes to blame herself); and it’s pure noir.