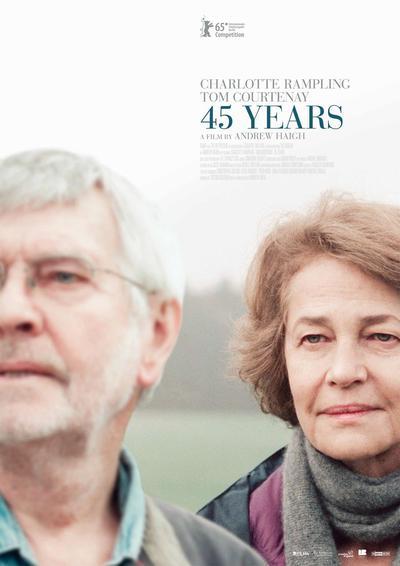 Plot
Kate Mercer (Charlotte Rampling) and her husband Geoff (Tom Courtenay) had to cancel the party for their 40th anniversary at short notice when Geoff underwent bypass surgery. The comfortably off, left-wing, childless, provincial couple now have a week to go before a replacement party to celebrate their 45th anniversary. Theoretically, this week should just involve planning, dress purchasing and a bit of social fretting. This is not to be: shattering news arrives for Geoff from the Swiss authorities, explaining that the perfectly preserved body of his ex-girlfriend, Katya, has been found, 50 years after she slipped into an Alpine crevasse. From the moment the news is received Kate can ‘smell Katya’s perfume in the room’ and her perspective on their marriage changes forever. (From Wikipedia, the free encyclopedia)

A gently devastating snapshot of a loving yet subtly fractured relationship in its twilight years, Andrew Haigh’s wonderfully performed 45 Years is an elegant and restrained film that dwells on how an apparently happy union can be tormented by an echo from the past. Delicate, thoughtful and moving, the film cements Haigh’s reputation as one of the leading lights of British cinema, with him drawing out award-deserving performances from his veteran leads Charlotte Rampling and Tom Courtenay. (by Mark Adams)

About
45 Years is a 2015 British drama film directed and written by Andrew Haigh. The film is based on the short story In Another Country by David Constantine.[3] The film was screened in the main competition section of the 65th Berlin International Film Festival. Charlotte Rampling won the Silver Bear for Best Actress and Tom Courtenay won the Silver Bear for Best Actor.