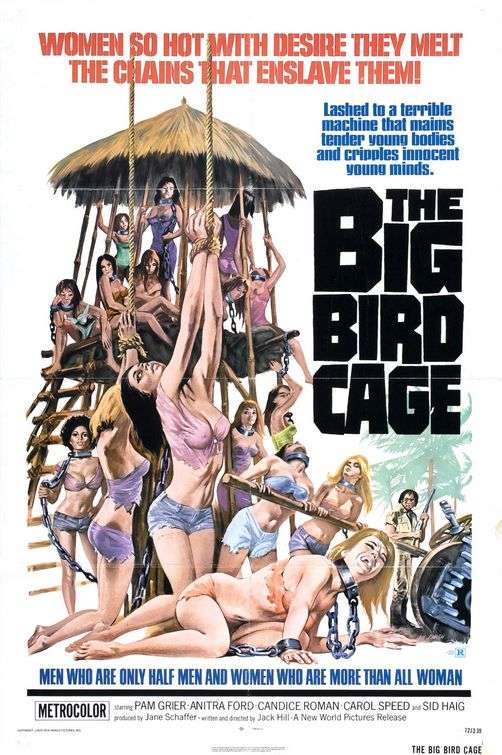 review from :movies.com
THE BIG BIRD CAGE/ FACTS Director Jack Hill followed up his genre-defining women-in-prison film THE BIG DOLL HOUSE with this action-packed sequel, also starring Pam Grier and set in the Philippines. Grier plays Blossom, the machine gun-toting girlfriend of revolutionary leader Django (Sid Haig). His fellow revolutionaries want girlfriends too, so Django and Blossom make plans to liberate the nearby women’s prison, a grueling sugar mill work camp run by the high-strung Warden Zappa (Andy Centera). Slender babe Anitra Ford co-stars as Torry, a free-spirited nymphomaniac whose bedding of important political figures has landed her in the prison, and who together with Blossom makes plans for the big, explosion-packed breakout. Grier and Ford are both dynamite with their bad attitudes and skimpy prison attire, and there’s plenty of catfights–both in and out of the mud, and showers. Aside from some dated gay-stereotype humor involving the male guards of the camp, this is still pretty rock-solid entertainment, replete with suspense, sex, bloodsoaked veangance, and captivating outdoor cinematography by Phillip Sandalan. Hill and Grier would follow up this success with the blaxploitation classic COFFY the following year. *Cast* Pam Grier , Anitra Ford , Sid Haig , Vic Diaz , Carol Speed , Andy Centenera