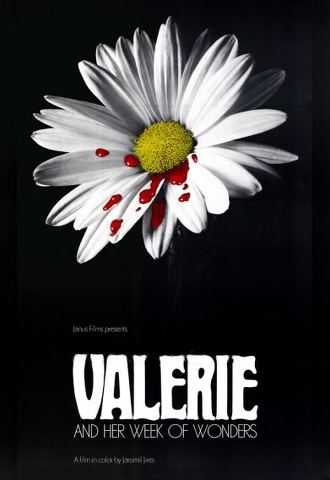 A girl on the verge of womanhood finds herself in a sensual fantasyland of vampires, witchcraft, and other threats in this eerie and mystical movie daydream. Valerie and Her Week of Wonders serves up an endlessly looping, nonlinear fairy tale, set in a quasi-medieval landscape. Ravishingly shot, enchantingly scored, and spilling over with surreal fancies, this enticing phantasmagoria from director Jaromil Jireš is among the most beautiful oddities of the Czechoslovak New Wave. (Criterion)

Quote:
Valerie and Her Week of Wonders is a poignant, surreal Freudian fantasy in which a young girl’s transformation from child to adult through the onset of puberty is expressed as a nightmarish fantasia, a dreamlike fairy tale populated with vampires, uncertain parentage, transformations from one state to another, grisly violence and lurid sexuality. Valerie (Jaroslava Schallerová) lives with her forbidding grandmother (Helena Anýzová), retaining her child’s sense of curiosity and good humor despite the austere circumstances of her upbringing and the religious seriousness of her pale, corpse-like grandmother. Director Jaromil Jireš depicts Valerie’s grandmother in thick, pasty makeup that gives her a wan appearance, as though she was already a ghost with no corporeal presence. There is an opposition here between those who embrace the sensuality of the world, like the curious, open-minded Valerie, and those who deny it and castigate themselves for supposed sins of the flesh.

Valerie is very much out of place within this atmosphere of Christian guilt. She spies on young women bathing in a lake, watching as the women’s white clothes are soaked through, and they kiss and play strange sexual games; one woman puts a slithering, writhing fish down her shirt, letting it slide around between her breasts. As Valerie walks home after seeing this outrageous erotic fantasy, a few drops of blood fall on a white flower, signaling the girl’s first period and thus her transition from girl to woman, setting her off on a journey she only half understands. Her grandmother takes the news disapprovingly, but is even more dismayed when Valerie points out a sinister stranger who her grandmother seems to know: a man (Jirí Prýmek) dressed in a black cloak with a pale white face and horrible crooked, pointed teeth. He hides behind a weasel mask and keeps with him a servant named Eagle (Petr Kopriva), who generally obeys his orders but revolts when it comes to Valerie, with whom he forms a nearly instant camaraderie. This sinister man is a monster, sometimes called Weasel, or Richard, or the constable, or the bishop; he is apparently many different men, possibly Valerie’s father, a former lover to Valerie’s grandmother and/or her absent mother. He is the devil, or a demon, or the vampire of Murnau’s Nosferatu (with whom he shares an especially close resemblance with his bald white dome and pointed ears), or a metaphysical incarnation of the missing man who begat Valerie and then vanished from her life. Whoever he is, his attempts to gain control over innocent young Valerie, who possibly holds the key to his eternal life, send the young girl on a strange adventure through multiple planes of reality.

Jireš depicts Valerie’s adventures with a casual surrealism that is constantly disrupting the flow of reality. Characters die and are reincarnated without explanation, while others transmute into multiple forms and multiple personalities, seemingly warped by the strange power of Weasel or Valerie’s imagination. As Valerie hovers on the cusp of womanhood, she is beset with multiple possibilities, multiple incarnations of her oncoming sexual awakening. As befits this unstable, uncertain transitional phase, her exposure to sexuality is sometimes fascinating, sometimes horrifying, sometimes merely puzzling. She is pursued by the priest Gracián (Jan Klusák), another religious hypocrite who promises her he’ll tell her all about her father and mother but instead merely tries to seduce her, dancing towards her baring his grotesque teeth and pulling his robe down from around his neck to reveal the necklace of bones at his throat.

The veneer of normality is very thin here, and the priest might become an animalistic rapist at a moment’s notice, just as the “missionary” in the pulpit, lecturing about the sanctity of virginity and the way innocence is spoiled by sex, might be Weasel barely in disguise, his white face painted dark blue beneath his robes. There is something disconcerting, though, about the way Jireš’ camera sometimes seems to be ogling Valerie and the real teen actress who plays her, who spends much of the film in various states of undress or carefully arranged disarray. There are times when Jireš seems unwittingly complicit in the sexually voracious leers of those who pursue Valerie.

Despite this unsettling feeling, the film is a sensual phantasmagoria, exploring the strange netherworld opened up at the junction point between childhood and adulthood. Jireš marries his dazzling imagery to a continually shifting score (written by Lubos Fiser and Jan Klusák) that encompasses tinkling music box circularity, jaunty folk melodies, and haunting religious choral hymns. This mix of disparate musical moods and sources mirrors the film’s uneasy blend of fantasy with a child’s eye view on reality. The film’s unsettling surrealism is perhaps a perfect visual expression of a preteen’s insecurity and uncertainty: she is beginning to understand certain things, to be disabused of her innocence, but she her perspective is still slightly askew, without an adult’s certainty about how the world works and what her experiences might mean. Valerie is starting to be exposed to the adult world, and what she sees looks grotesque and perhaps even evil: thus one interpretation of the film is as a wholly subjective perspective on Valerie’s dawning realizations about her family’s complicated sexual history and the hypocrisy and distasteful behavior underlying the seemingly respectable Christian folk around her.

Valerie, however, is ultimately triumphant because she manages to maintain her honor and her innocence even as she transitions towards adulthood. She is not corrupted by the adult things she is learning about, but instead confronts them directly. She resists the priest’s advances and struggles to understand the nature of her developing relationship with Eagle: are they brother and sister or prospective lovers? This relationship especially could indicate a new perspective forming, a transitional state between the innocence of childhood, when everyone, boy or girl, is merely a friend, a platonic sibling, and the new sexual awareness of maturity, when relationships between boys and girls are fraught with sexual tensions and the possibilities of less platonic affections. Valerie is still polysexual, unattached to any particular conception of herself or her sexuality. At one point, she goes to bed with the young bride Hedvika (Alena Stojáková), and Valerie’s innocent affection (“I’ve never had a girlfriend before,” she exclaims excitedly), her kisses and embraces, cure the other woman of the vampiric affliction she’d been suffering, which had been slowly draining the life from her. Valerie, in her innocence, is a powerful figure; hers is a spiritual innocence, like that of Joan of Arc, to whom she’s implicitly compared in the scene when Gracián, in a fervor of religious hypocrisy, sentences her to be burned at the stake for supposedly trying to seduce him.

With its striking surrealist imagery, Valerie and Her Week of Wonders is a haunting, magical film, a film alive with a sense of forbidden sexuality and transformation. It’s a deeply strange film, constantly subverting narrative clarity and demanding that its images be taken as metaphors rather than at face value. Valerie’s grandmother makes a deal with the Weasel for eternal youth, and returns as a sexy vampire who sucks the life out of the men she beds, but by the film’s end she’s been restored to her former dour, pale-faced self; perhaps her vampiric incarnation was only an expression of her domineering influence on Valerie’s life. The ending is similarly ambiguous, as Valerie wanders with a mischievous smile through a riverside bacchanalia, summoned with a wave of the hand from various revelers to join in their orgiastic sexuality, but she simply strolls through their midst, no longer threatened by the man in the black robes, or her grandmother, or even by the frightening and longed-for specter of her missing mother. Instead, she simply finds her way to a white, frilly bed in the center of a clearing and goes to sleep, initially surrounded on all sides by a circle of partiers but then framed in isolation within the spacious clearing for the film’s final image. This image suggests that Valerie has maintained her innocence and purity of spirit against the temptations and horrors of the world, and gone back to sleep with the ease of a child in her cradle. (Ed Howard )