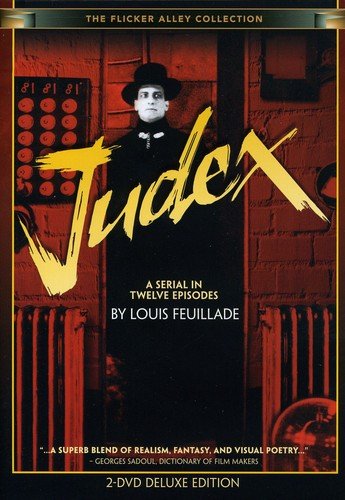 Occupying a delicious place between Victorian melodrama and superhero comic books, Judex is one of the great serials from the career of French movie pioneer Louis Feuillade. From his castle lair high above the countryside, mystery man Judex (granite-faced Rene Creste) seeks to protect the lovely Jacqueline, while nursing a secret hatred for her fatcat father. Multiple kidnappings, assassination attempts, and narrow escapes follow; much of the mischief is orchestrated by wicked temptress Diana Monti (Musidora, the star of Feuillade’s Les Vampires). There’s also a delightfully overwhelmed detective (Marcel Levesque), who’s a sort of prototype of Monsieur Clouseau, and a streetwise Artful Dodger known as the Licorice Kid.

On DVD, the serial’s 12 episodes and prologue are smartly tinted and feature a lively orchestral score by Robert Israel. Feuillade’s use of real locations (both Paris and the Riviera figure prominently in the action) gives the film a realistic freshness that cuts wonderfully against the flamboyant plotline. When Feuillade’s serials were re-discovered in the 1940s, they proved influential to a generation of filmmakers, and Georges Franju actually did a feature-length remake of Judex in 1963. Indeed, the figure of Judex remains a powerful fantasy protector: his secret lair, his disguises, his complete moral authority (although a cynic might point out that he doesn’t always do a good job of protecting his ladylove–but then there’d be no cliffhangers). For all intents and purposes, Judex is Batman. He even has the cape. –Robert Horton