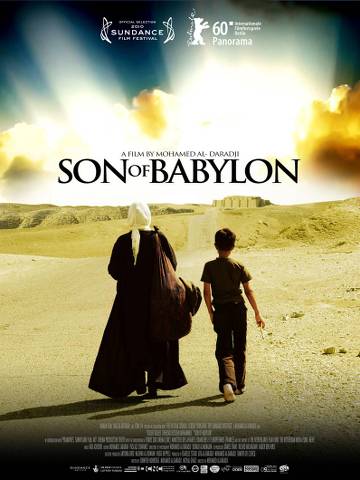 When we think of Iraq, we picture a war torn country which had seen the worst of a dictatorship under Saddam Hussein, where it spent many years in conflict with Iran, before the UN moved in during Desert Storm to liberate occupied Kuwait, followed by the US led invasion in Desert Storm II. Western media continue to pepper us with news that internal strife continues to this very day with news of suicide and miscellaneous bombings, and I’m sure we’re more than curious to want to know about tales from within, rather than agencies from the outside that continue to paint it like a war zone. This is as close as you can go on a road trip from Northern Iraq to Baghdad, onward to Nasiriyah then Babylon.

Son of Babylon deals with the missing generation, and a mother/grandson’s search for their son/father, who was taken by force years ago during the Gulf War, and hasn’t been heard since. Set three weeks after the fall of Saddam Hussein, the film opens with the young boy Ahmed (brilliantly portrayed by a flute holding Yasser Taleeb) and his grandmother Um-Ibrahim (Shehzad Hussein) beginning their long quest for answers and closure, and it is through their eyes and witnessing their experiences, do we get a glimpse of just how emotionally daunting and physically challenging this quest is, amidst a stunning on location backdrop of an Iraq we never get to see, until now.

Written, directed and lensed by Mohamed Al-Daradji, his story touches on the experiences of three generations of Iraqis, as Ahmed and Um-Ibrahim come into contact with Musa (Bashir al-Majid), an ex-Republican Guard about the same age as what their son/father would be if found, and how his life got filled by the war time atrocities that he had to commit under orders. The narrative puts our trio on a never-ending search as they get bounced and referred to another city where other mass graves have been found, suggesting an inexplicable nationwide genocide that had taken place which accounted for the thousands of people who have disappeared.

The story will also open eyes to how diverse Iraq is, with language and cultural barriers from within the population as they struggle to communicate with one another (usually dismissed fairly quickly when one speaks a different language), only to share common ground in their history of grief brought about through the ravages of war. It’s not all doom and gloom all the time as the film does contain some light hearted moments courtesy of Ahmed, and his significance cannot be ignored in a film that closes with a bittersweet end to suffering, and the hope placed on today’s youth who have to forge their own way ahead on a long, dusty road of uncertainty. Ahmed demonstrates his street-smartness, haggling abilities and knowledge of his rights, that I think he epitomizes the spirit of the new generation who are competent in holding their own ground.

Travelling the world’s various festivals, picking up a multitude of awards and being Iraq’s official entry to the Academy Awards next year, this is not an easy film to sit through as it does get a little bit exasperating with the outward show of gloom that will sap your emotional energies, but to the patient viewer it rewards with its beautiful sweeping visuals of a land that most have not had a chance to see, and a poignant story on forgiveness, reconciliation and internal healing that must begin for a nation emerging from its ruins. Recommended! (A NUTSHELL REVIEW)