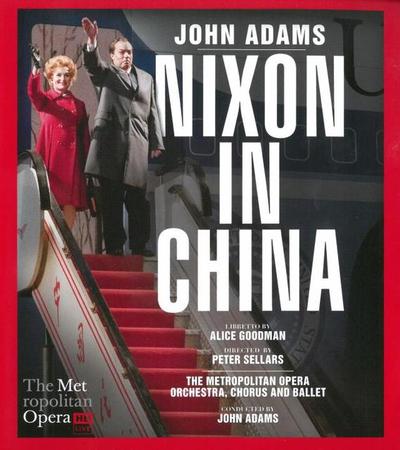 Synopsis of the opera

Reviews
“Air Force One finally landed on the stage of the Met — and so did perhaps the greatest American opera of the last quarter-century.”
Associated Press

“The scene in which the presidential plane descends for the arrival of Nixon and his entourage remains musically exhilarating and theatrically dazzling. The orchestra erupts with big band bursts, rockish riffs and shards of fanfares: a heavy din of momentous pomp….As a conductor Mr. Adams brought an obvious command of the metric complexities of the score to his performance. I like that he never pushed the music and tried to tease out its mysticism and hazy harmonic richness.”
The New York Times

“Not since “Porgy and Bess” has an American opera won such universal acclaim as “Nixon in China,” a piece made of equally impressive contributions by the composer, John Adams, the librettist, Alice Goodman, and the director, Peter Sellars.”
The New Yorker

“…A transformative score that demonstrated the full range of what Minimalism could accomplish…In his first stage work, Adams showed that the pared-down toolbox of standard harmonies, chugging rhythms, unembellished scales, and patient repetitions could yield an old-fashioned bone-and-gristle drama.”
New York Magazine

“When John Adams’s opera “Nixon in China” had its world premiere in 1987, it was provocative, edgy, audacious. Twenty-four years later, it’s come to the Metropolitan Opera and, along the way, become a Modern Masterpiece.”
The Washington Post

“Adams’s score, which he led incisively on Wednesday in his house conducting debut, is a juggernaut of chugging minimalism…[and] also ingeniously tailored to its own settings and dramatic personae, chief among them Nixon himself, whose character inspired Adams to insert a saxophone-rich swing band sound right into the heart of the minimalist machine.”
Boston Globe

“Some of Adams’ strongest music… This is operatic composition of a very high order.”
MusicalAmerica.com

“Having finally arrived at the Met, “Nixon in China” has traveled the world. It is a masterpiece, a staple of the opera repertory…”
Variety Previous: Masaki Kobayashi – Musuko no seishun AKA Youth of the Son (1952)
Next: Federico Fellini – Intervista [+extras] (1987)