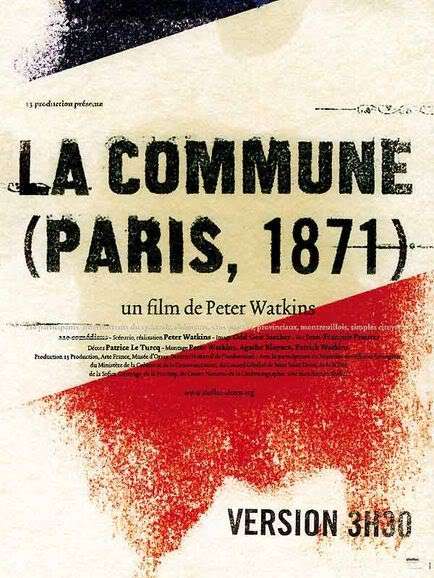 VillageVoice Review :
So far as mental fireworks go, the Fourth of July weekend is unlikely to offer anything more spectacular than Peter Watkins’s masterpiece La Commune (Paris, 1871).Dynamic historical reconstruction in the form of an experimental documentary, Watkins’s six-hour feature was made in DV for (and largely buried by) French TV; it’s as much immersion as narrative – complicated yet lucid and contagiously exciting.

The Second Empire collapsed in 1870 as France faced defeat at the hands of Bismarck’s Prussia. The weak new republican government fled to Versailles; workers and radical intellectuals took control of Paris, held elections, made laws, and administered the city for two months until they were crushed by the reconstituted French army and the victorious Prussians. At least 20,000 Communards, including women and children, were killed in street-by-street fighting; thousands more were massacred or imprisoned afterward. Still a sensitive subject, the Commune is minimally taught in French schools. (Before Watkins, the lone movie treatment was the delirious Soviet silent New Babylon.)

“The Commune as test of the revolutionary legend,” reads one of Walter Benjamin’s notes for his Arcade Project – and it is also the test of Watkins’s radical film practice. Over the course of his fiercely independent career, Watkins (after nearly 40 years still best known for his BBC-banned “documentary” of nuclear holocaust, The War Game) has more or less reinvented historical filmmaking. This visually spare, conceptually rich, and unobtrusively beautiful re-creation of a doomed political utopia was entirely filmed in a derelict factory; it begins with a few of the actors, most of whom are non-professional, introducing themselves and touring the abandoned, debris-strewn set. Thereafter, the spectacle proceeds in the present tense, literally – mainly in direct address as characters explain their situation, with astonishing force and conviction, to each other, as well as to the guerrilla media enthusiasts of Watkins’s imaginary “Commune TV.”

Sustained over a period of hours, this impassioned hubbub conveys tremendous immediacy. (In The Universal Clock, a Canadian documentary on Watkins, the filmmaker can be seen pacing, pointing, and even jumping for emphasis as he conducts the unfolding action.) La Commune is meant to evoke the unfamiliar sensation of revolutionary euphoria, of living – and dying – in a sacred time. Watkins’s cast members researched their characters as much as they learned their lines; their performances are less a matter of acting than role-playing. In their 1962 “Theses on the Paris Commune,” the French Situationists noted that those who examine history from “the omniscient viewpoint of God [or] the classical novelist . . . can easily prove that the Commune was objectively doomed. . . . They forget that for those who really lived it, the fulfillment was already there.” And so it is here. Focused on process and profoundly anachronistic, La Commune was unfashionably intended to change the lives of its participants.

Watkins’s remarkable ensemble piece is a portrait of the public; the actors are always in some sense talking as themselves. Discussion of 1871 easily segues to present-day concerns – there are even meetings to discuss the film. The reporters, meanwhile, interrogate their own points of view, and the action is frequently interrupted by bulletins from the government’s Versailles Television, which has its own suitably foppish newsreader as well as a resident pundit (a royalist historian Watkins recruited through an ad in Le Figaro). The director, who used a similar strategy of interpolated TV reporting in his first feature, Culloden(1964), knows his newsroom clichés. Indeed, the rise of a media monolith has long been one of his major issues.

Like Culloden, La Communeis in good measure an action film that builds inexorably to a powerful climax. This syncretic work of left-wing modernism – suggesting not only Brecht and Vertov but Soviet mass spectacle and didactic Godard – is at once immediate and self-reflexive. Watkins restages history in its own ruins, uses the media as a frame, and even so, manages to imbue his narrative with amazing presence. No less than the event it chronicles, La Commune is a triumph of spontaneous action.