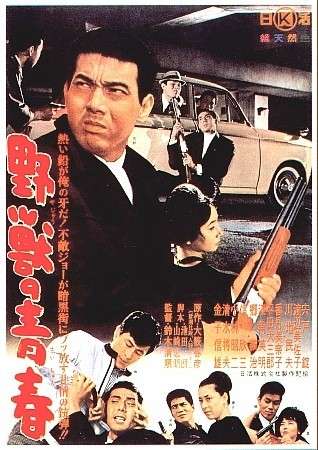 Plot :
Joe Shishido plays a tough guy with a secret agenda. His violent behavior comes to the attention of a yakuza boss who immediately recruits him. He soon tries to make a deal with a rival gang a starts a gang war. His real motivations are gradually revealed as we find out how this all ties in with the murder of a policeman shown at the beginning of the film.

Review :
This was the Nikkatsu programmer in which contract director Suzuki first asserted his voice – and assertive is the word. Soon after the apparent love-suicide of a cop and his mistress, the tough Mizuno (Shishido, whey-faced as ever) muscles his way to prominence in yakuza circles. He gets himself hired by two rival gang bosses who hate each other as much as they hate the cops. But who is Mizuno really and what is his secret agenda? And what does it have to do with the Takeshita School of Knitting? Suzuki films this nonsense with a keen sense of its absurdity, but also raises the genre’s visual rhetoric to a new high. Who else would park a gay yakuza in a pink limo under matching cherry blossoms? Or whip up an unexplained sandstorm outside the room where a sadist is indulging his vile passions? Hot stuff.