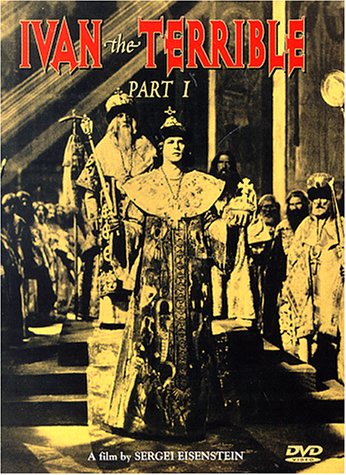 From Turner Classic Movies:
On the day of his coronation as the first Tsar of Russia, the former archduke of Moscow, Ivan IV (Nikolai Cherkasov), finds himself inheriting a deeply troubled empire. The Russian people are divided into estranged clans including the Tartars and the aristocratic boyars, led by the evil, black-cloaked princess and Ivan’s aunt Euphrosinia Staritskaya (Serafima Birman).

Ivan’s enemies are legion and also include a traitorous ally Kurbsky (Mikhail Nazvanov), who invites Ivan’s trust but lusts for power, and for the hand of the tsar’s wife Anastasia (Lyudmila Tselikovskaya). Ivan’s desire to create a united Russia, announced on the day of his coronation, is met with fury from his subjects. Ivan’s one confidant is his beautiful wife Anastasia, whom Ivan marries soon after his coronation in a lavish ceremony and wedding feast soon invaded by masses of contentious Russians. Anxious to teach his rebellious new citizens a lesson about the necessity of a consolidated country, Ivan and his army march to Kazan to violently suppress the Tartars. But when Ivan returns to his wife and small child, he is struck down by illness and unable to suppress a bitter power struggle for his throne.

In many ways, despite its 16th century setting, Ivan the Terrible, Part I (1945) is a very contemporary political parable with its telling glimpse at how treacherous the road to power and privilege can be, but also for showing a Russia not unlike the one seen in today’s newspapers. Like the divided former-Soviet republic of today, the Russia of Ivan’s time is a huge territory defined by enormous cultural and religious differences.

For Ivan the Terrible, Sergei Eisenstein took a remarkable detour from the revolutionary subject matter of his previous films like The Battleship Potemkin (1925) and October (1927) which focused upon the bravery, nobility and suffering of the Russian citizenry under the decadent, corrupt tsar. His revolutionary film language of “montage” in which clashing images are combined to create new, more meaningful implications was also drastically altered in Ivan’s more theatrical, operatic style. Ivan also presented a tsar who was not some despotic, abstract figurehead, but a flesh and blood person daily battling infidelity within his ranks. As a remedy to his lack of allies, Ivan forms a contingent of young, loyal bodyguards around him to protect his interests. Even after having completed the scenario for Ivan the Terrible in 1941, Eisenstein devoted two more years to historical research, an analysis of Ivan’s character and over two thousand drawings of the future production. The result is a singular, artistic vision. The actors in Ivan perform in an exaggerated, often halting style that often brings to mind a combination of silent film, ballet and the Kabuki theater. As in his previous films, Eisenstein favors gorgeously shot close-ups of his actors whose frozen gestures of rage or joy often gives them the appearance of statues, or gargoyles. Ivan the Terrible has been praised for its formal beauty greatly aided by a Sergei Prokofiev score, though others have called it stagey and mannered. The operatic tone might be explained by an opera of War and Peace Prokofiev was completing at the time Ivan was in the planning stages, and for which Eisenstein offered some production sketches. Many of those designs were eventually used in the staging of the opera of War and Peace in Leningrad in 1946. Ivan was created under tumultuous conditions that may have intensified the film’s gravity. At the time of its production, Russia was being bombed by the Nazis and for safety’s sake, filmmakers including Eisenstein were evacuated to Alma Ata, the capital of Kazakhstan. In the biography Eisenstein by Ion Barna, actress Serafima Birman (she plays Euphrosinia) describes the dedication of the cast and crew in bringing Eisenstein’s vision to life: “We agreed to do the most extraordinary things for him; for instance Cherkasov, in the Kazan sequence, had to wear a very heavy metal costume, and he willingly stood in it on the edge of precipice, for take after take, in a temperature of sixty degrees centigrade. Poor Lyudmila Tselikovskaya once spent a whole night in a coffin because Eisenstein refused to let her get out of it. Why did we do these things without protest? I have already suggested one reason in our deep professional respect for Eisenstein as an artist. But another case, and of equal importance, was a reflection of the war. Elsewhere in a country, people were fighting and being maimed for something they believed in, and perhaps the only way we could compensate for the privilege of our own safety was to fight a battle for what we regarded as serious and lasting art.” The film opened to mixed reviews upon its 1945 release and to this day is seen as a failure by some and as a masterpiece by others, including Charlie Chaplin who called it “the greatest historic film that has ever been made.” Bosley Crowther of the New York Times called it “a film of awesome and monumental impressiveness in which the senses are saturated in medieval majesty.”