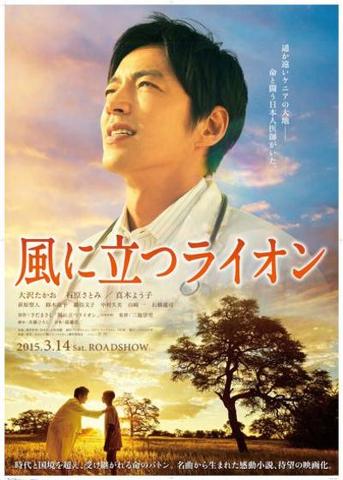 (from Japanese Film Festival)
Lion Standing in the Wind is based on a real story and chronicles the inspirational life of Dr Koichiro Shimada who sets off to Kenya to serve as a medical doctor. In a turn of events, he finds himself stationed in a hospital in Lokichogio in the heart of the Kenyan conflict. Witnessing death and the grim reality of child soldiers rocks him to the core and propels him on a path that he did not expect. He abandons his life in Japan and devotes himself to saving lives in Kenya.

Released in March this year, this candid drama is the latest instalment from the prolific director Takashi Miike, usually known for his ultra-violent and outrageous works (As the Gods Will, Ichi the Killer).

Based on the novel Kaze Ni Tatsu Lion (The Lion Standing in the Wind) by Masashi Sada. The novel itself is based on the song Kaze ni Tatsu Lion, also by Sada, which was inspired by love letters written by the real-life Dr Koichiro Shibata, who ran a mobile clinic in Kenya.

The catalyst for this adaptation was actor Osawa Takao, who was so moved by the song that he urged the songwriter to adapt the song into a novel, and then a film. Osawa went on to star as Dr Shibata in the film adaptation.