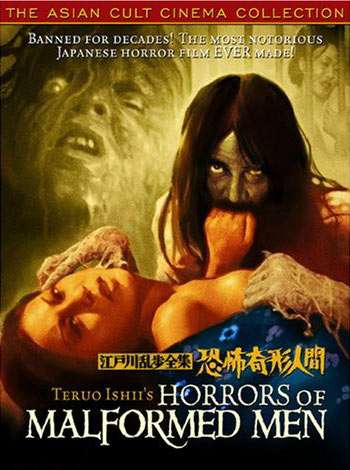 PLOT SUMMARY
After escaping from an asylum, young medical student Hirosuke assumes the identity of a dead man in order to solve the mystery of a weird doppelganger whose picture he sees in the newspaper. Traveling to faraway Panorama Island, he discovers a mad scientist surgically remaking normal human beings into misshapen monsters…but that is only the beginning. Hirosuke soon learns the horrible truth about the island and his own family’s shameful past, and finds himself plunged into the depths of incest, murder, and madness.

TERUO ISHII INTERVIEW
You adapted the work of Edogawa Rampo several times. What are your feelings on Rampo’s writing?
I deeply love Rampo’s work. It’s a frightening but also an exciting and enjoyable experience to immerse yourself in his very mysterious world, and it was that feeling that was at the source of all the adaptations of his work that I’ve done.

You were a boy when Rampo wrote his stories, in the early Showa period. Do you feel an affinity for his writing on that level as well? Is there a certain nostalgia for the period that comes into to as well?
Every boy from my generation up until the generation of Shinya Tsukamoto, who I get along with very well, has read the work of Edogawa Rampo. His writing was serialised in a magazine called Shonen Club, which was very popular among boys for many years. It’s because we all began reading him during our childhoods that we feel very close to Rampo’s work.

Many of the film adaptations of his writing combine several of his stories into one narrative. You did the same with your film The Horror of Malformed Men. Is there a certain difficulty in translating his work to the screen?
I wouldn’t say that it’s difficult. In The Horror of Malformed Men I included his story The Human Chair for example, which is originally very short. You can’t pad that out into a feature-length film without creating something very boring, so I combined it with other stories. I think that this is the right way to approach it. Also, in my case, I didn’t have many occasions to adapt his writing, so I figured I would include as much as possible whenever I had the chance. There are simply too many wonderful stories of his that I would like to adapt and too few opportunities to adapt them.

In recent years you’ve been working essentially as an independent filmmaker, in a few instances shooting your films on video. You probably have to make do with much more modest means than in the past but I can imagine that in return you’re given a lot of freedom.
Yes, that’s very true. A big budget comes with constraints. When someone gives me a lot of money to make a film, they also have a lot of demands. So even though I don’t have as much money to make films as I used to, I’m very happy to be working this way now.

The independent films you’ve made the past few years include two adaptations of Yoshiharu Tsuge’s manga, one of Rampo, plus a remake of Nobuo Nakagawa’s film Jigoku. These people’s works all share the oneiric quality that I feel also marked The Horror of Malformed Men. Since you made these recent films independently, can we conclude that expressing that dreamlike atmosphere is one of your particular interests?
I’m really glad to hear you say that. It’s very true that they all share that atmosphere. Their universes are very similar. Nobuo Nakagawa is a much more esteemed director than I am, but he was someone with a very childlike enthusiasm for his work. He had an eternal love for films. Whenever I invited him to come watch one of my films, he would always hang around for a long time afterward to talk about my film and about cinema in general. We even continued on the way to the train station after we left. He never lost his enthusiasm.
– source: link