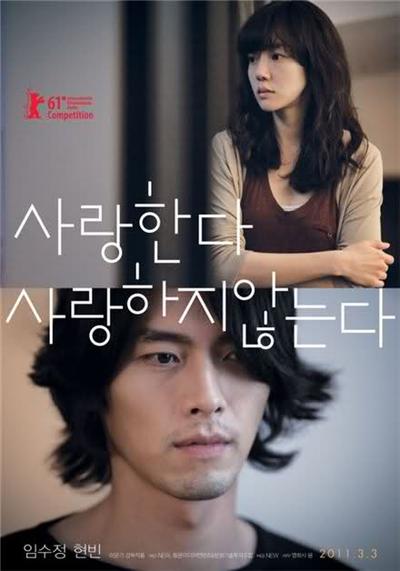 Quote:
Seoul, the present day. Yeong-shin (Im Su-jeong), who works for a publishing company, has been married to architect Hwang Ji-seok (Hyeon Bin) for five years. One Thursday, while he is driving her to the airport for a two-day business trip to Japan, she tells she him she is leaving him for another man. Ji-seok reacts in a muted way, not even asking her who the other man is. Some time later, on the day the other man — photographer Kim Seong-hun (Ha Jung-woo) — is due to pick her up with her things, Yeong-shin and Ji-seok find themselves closeted together in the house as the rain pours down outside from a hurricane that has been causing havoc in the region. And then Ji-seok finds a stray kitten crying on the patio outside. As quiet as a whisper, Come Rain, Come Shine’s rueful depiction of the last day of a couple’s marriage only speaks to the most sensitive of poets or most lovelorn of loners. Director Lee Yoon-ki’s suggestive dialogue, body language and mise-en-scene evoke the awkward atmosphere of a “peaceful breakup.” However, Lee’s conscious decision to empty the narrative of all drama and eventfulness risks bringing it to the brink of banality.

European art-house audiences, used to seeing this kind of understated mood piece by European or Japanese directors, will not as easily impressed. Korean critics may be more appreciative, but not so Korean audiences except perhaps leading man Hyun Bin’s most dedicated fans.

The film’s formalist inclinations are visible from the opening sequence, which consists of a 9-minute continuous moving take, shot through the dashboard of the unnamed protagonist (Hyun Bin) driving his wife, Young-shin (Lim Soo-jung), to the airport for her business trip. After some casual conversation, she tells him of her decision to leave him for someone else. He makes a lame plea for her to reconsider but seems quickly resigned to the situation.

Cut to the couple’s designer suburban house. Young-shin is already packing her stuff to move out. The two drink coffee, get sentimental about paraphernalia and make plans to dine at a fancy joint. Yet their desire to tie things up neatly are frustrated: A baby kitten gatecrashes their home and disappears; their neighbors come looking for the kitten; the torrential rain floods the bridge; and they end up staying in to cook pasta, but credits roll before they have a chance to eat together.

Come Rain, Come Shine can be seen as a companion piece to Lee’s last film My Dear Enemy. Both condense the story into a day that unspools like real time. Both focus on the shifting but barely pronounced feelings of ex-lovers. While My Dear Enemy fluidly weaves around photogenic Seoul and a bevy of interesting characters, this film is definitely more downbeat and stuffy. The two introverted protagonists linger reclusively inside their memory-filled house, where any contact with the outside world is viewed as an intrusion.

Lee is adept at evoking the unnatural calm that descends when ex-lovers try to behave in a civilized way.

The screenplay was adapted from a Japanese short story, The Cat That Can Never Come Back by Areno Inoue. It accounts for its painful repression, detached tone and slow-brewing momentum more common in Japanese art-house cinema, a close counterpart being Nobuhiro Suwa’s A Perfect Couple.

Even the camera seems to tiptoe around the protagonists, who move about but go nowhere. These are interspersed with static, empty shots of interiors and furniture that look like real estate showrooms. The soft light, which falls partially on the cast, enhances the ambiguity of their positions. In lieu of sound, the incessant rain and mumbling radio announcements form a gloomy sound-scape.

With only two actors sustaining the whole film, more is needed than beautiful faces and soulful gazes. Lim and Hyun are fine when making small talk, but they stumble when required to convey their reluctance to part countered by equal reluctance to show it. They only begin to hint at a wellspring of emotion inside toward the abruptly cut end. By then, it’s too late.