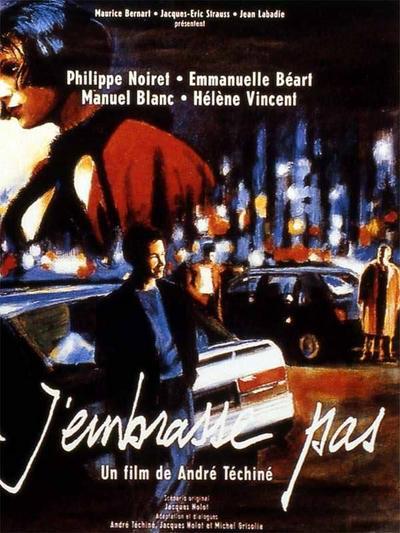 Young, naive and innocent, Pierre (Manuel Blanc) has dreams of becoming an actor. He is a good-looking and personable boy, and he has just moved to the city to see if he can’t accomplish his dreams. He gets a job as an orderly at a hospital and is further supported by an older woman (Helene Vincent), a nurse he has met there, in return for his sexual favors. However, in his acting class, he quickly discovers that he is not overflowing with talent, and his dream of becoming an actor grows dim. Instead, despite the advice of a knowledgeable and worldly older gay man (Philippe Noiret), he becomes a sex worker. It has long been a staple of the movies that certain hustlers and prostitutes maintain a distinction between their work and their lives by not kissing their clients, hence the title of this film, J’embrasse Pas. He grows to love the seedy, degraded lifestyle, and seems to be adapting well to his new profession until he has the poor judgement to fall in love with a high-class prostitute (Emmanuelle Béart) and earns the antagonism of her pimp. allmovie