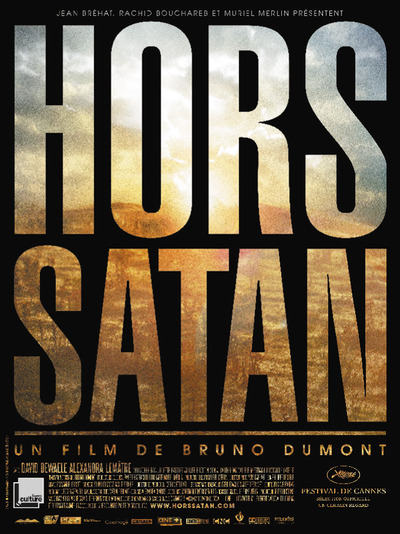 Quote:
With every film he makes, Dumont seems to delve deeper into a humanity that, in its connection to nature in all its mystery and force, is a deeply conflicted one. In “Hors Satan”, the division of what is good and evil and how it relates to the man we encounter at the start of the film, is somewhat less clear-cut.

We know nothing of the origins or nature of this man, not even his name. Since very few words are spoken either, everything must be gleaned from his face – and what a fascinating face it is. At times, there is a satanic look in his features, but there is also something of an appearance of the traditional image of Jesus in his appearance. The questions raised by this duality are intensified when we see him genuflect to the sunrise and take in the glory of the landscape, his hands cupped in offering or for receiving of grace, and when he is called upon by another woman in the community whose daughter is ill and seems to be demonically possessed. The ambiguity, I’m sure, is intentional. The traditional understanding of the concepts of good and evil are meaningless here – you might as well ask (and in a way you are) whether nature itself is good or evil.

Much of this is very familiar Bruno Dumont material and it’s filmed in his usual style. “Hors Satan” is made up of long silent scenes, very little dialogue, non-professional characters chosen for the earthiness of their appearance and lack of conventional beauty (yet striking and even beautiful in their own way), with images of strong violence and disturbing scenes of a sexual nature. With such emphasis placed on inexpressive faces, the use of non-professional actors, a preponderance of near-religious significance and solemnity (albeit in an unconventional, paganistic manner), there are clear parallels here not only to Bresson, but also to Dreyer, particularly “The Passion of Joan of Arc” and, certainly in the opening and closing scenes, with “Ordet”.

Dumont however has his own philosophical outlook that is completely different from Bresson and Dreyer, and a visual vocabulary that is also very much his own and often very striking indeed. “Hors Satan” is not easy viewing and it’s not pleasant viewing – but then you probably knew that already. It is however an immensely powerful film that deepens the themes and the body of work of one of the most distinctive and uncompromising film directors in France and the world today.