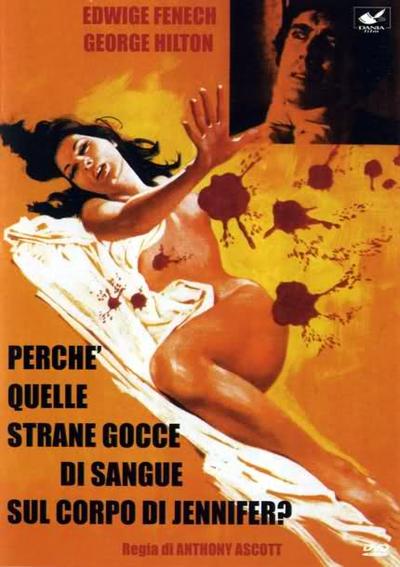 An attractive young woman is slashed to death in the lift of an apartment block. An exotic dancer, Mizar, discovers the body and is soon a victim herself (she is tied up and drowned in her bath). Having become friends with Andrea Antinori, the building’s architect, two models – Jennifer and Marilyn – move into the deceased dancer’s apartment. The police believe that Andrea is the killer. Meanwhile, Jennifer is being harassed by Adam, her former partner. After being attacked in her bedroom by the masked murderer, Jennifer seeks refuge in her neighbour’s apartment. The good samaritan, Sheena, turns out to be a lesbian who lives with her violin-playing father. Returning to Jennifer’s apartment, the women discover a bloodstained orchid and Adam’s body. Later, Marilyn is stabbed to death in a busy street. Andrea, who happens to be there, gets smeared in her blood and goes into hiding. Meanwhile, Jennifer is suspicious of her other neighbour, a sour-faced woman called Mrs. Moss, who takes comic books called “Killer Man” into her apartment…

By the early seventies, the giallo had become intrinsically linked with the horror genre. Here, the proverbial old dark house is replaced by a swanky new apartment block but the essence of the plot is still the same. There is also that other horror standby: a disfigured madman locked away from view. Producer Luciano Martino was adept at turning out slick, sexy thrillers (usually helmed by his brother Sergio) and this vehicle for Fenech, his mistress at the time, is no expection. For this outing, the director’s reins were given over to Giuliano Carnimeo, best knows for his Sartana westerns, and the resulting visuals are a testament to his eye for striking imagery. The rest of the team ensure that his noteworthy killer feature posesses all the right components: future director of trash gialli Stelvio Massi (Five Women for the Killer; Black Angel) competently handles the crisp photography; Eugenio Alabiso (a regular collaborator with Sergio Martino) handles the editing; and (another) soon to be director, Michele Massimo Tarantini, fills the assistand director’s shoes; while Bruno Nicolai’s score is easily one of the best genre pieces. More importantly, Gastaldi’s screenplay is a perfect synthesis of what most people expect form a giallo: this whodunnit is laced with copious amounts of nudity and intermittent violence, while the requisite red herrings include Pigozzi as the owner of a Pop Art nightclub, Woody Alled lookalike Oreste Lionello as a camp photographer; and Jennifer’s jealous ex-lover who previously involved her in “free love” orgies (an excuse for yet more naked flesh). Mild humour is derived from the antics of the philatelist police inspector (at one point he exclaims out loud, having apparently found an important clue but it turns out to be a rare stamp!) and his dim-witted sidekick. Even Jennifer’s flatmate Marilyn gets in on the act when she jokingly pretend to have been drowned in the bath where the former tenant expired. All in all, Jennifer… is a prime example of the genre and should be sought out at all costs.