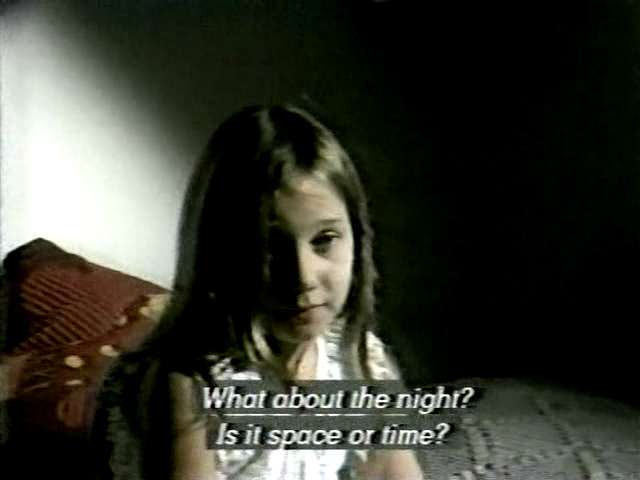 Quote:
General description
In this astonishing twelve-part project for and about television — the title of which refers to a 19th-century French primer Le tour de la France par deux enfants — Godard and Mieville take a detour through the everyday lives of two children in contemporary France.

This complex, intimately scaled study of the effect of television on the French family is constructed around Godard’s interviews with a school girl and school boy, Camille and Arnaud. Godard’s provocative questions to the children range from the philosophical (Do you think you have an existence?) to the social (What does revolution mean to you?). The programs’ symmetrical structure alternates between Camille’s and Arnaud’s segments (or movements), each of which is labelled with on-screen titles: Obscur/Chimie is paired with Lumiere/Physique; Realitie/Logique with Reve/Morale; Violence/Grammaire with Desordre/Calcul. 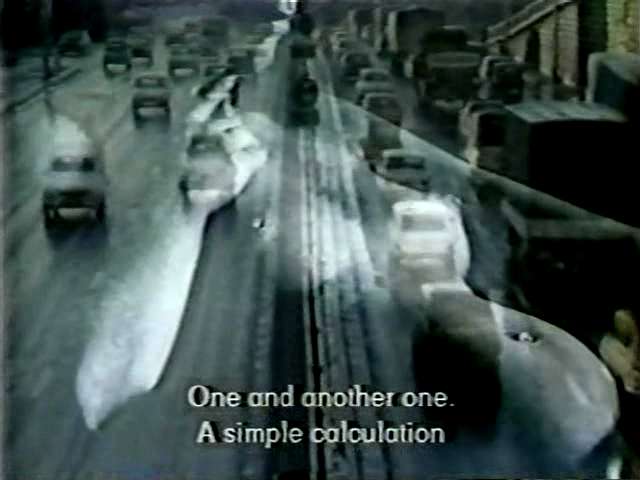 Quote:
Using precise formal devices, including the extended take, slow motion, closeups, and the freeze frame, Godard and Mieville “decompose” the quotidian world of their young subjects by focusing on the minutiae of the everyday and isolated gesture, the significance of a gaze. In one remarkable sequence, the fixed camera remains on a close-up of Camille as she sits in silence at the dinner table, while her parents hold an extended conversation offscreen. Another extended sequence observes Arnaud in the classroom.

The children’s interviews (titled Verite) and scenes of their everyday routines at home and at school (Télévision) are followed by the ironic commentary of two adult television journalists (Histoire) who provide a history/story that elaborates on the interviews. Intercut with multi-textual collages of television, cinema and advertising images, these discursive visual essays analyze the economic, social and ideological functions of the mass media. 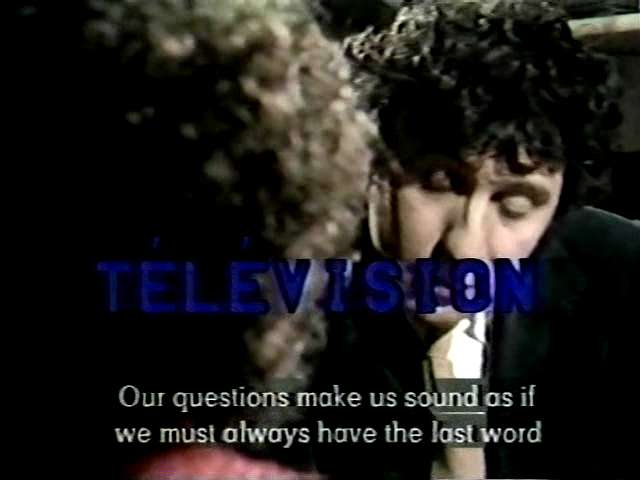 Quote:
As they expose how a child’s world is “programmed” by the institutions of family and television, Godard and Mieville posit the mass media as the pervasive cultural influence in the home, with television as the 20th century primer. A provocative social discourse that resonates with eloquence and wit, France/tour/detour/deux enfants is an extraordinary achievement. 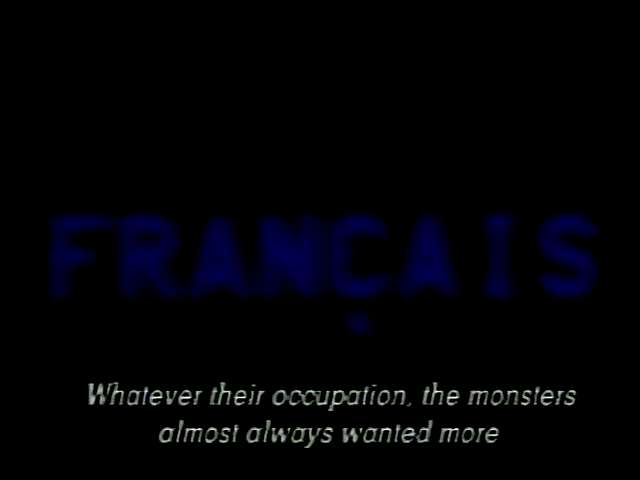 1st mvmt:
The first program begins at night. Camille gets undressed and then goes to bed, while “the monsters” of consumer society use the motorways to get home as quickly as possible. Jean-Luc Godard, however, slows the image down. The night is the essence of questioning, differentiating first between what is light and what is OBSCURE or dark. It is also the origin of things and their CHEMISTRY. The “TRUE” interview of Camille, behind which we hear the noise of housework, concerns night in the literal sense (‘is night space or is it time?’) and in the figurative sense (the night of a person’s existence and of a person’s image). Camille’s replies are surprising and incite us to think. They refer to “the STORY of: a beginning”, inside (the night, the child in the womb) in relation to outside (the day, the mother). [courtesy of newmedia-art.org]

2nd mvmt:
In the second program, day has broken. Arnaud sets off for school while “the monsters rise out of the earth”, i.e. from the metro to “go to the factory”. The voiceover exaggerates the system in which we are all involved in order to highlight it: “They are going off to serve major civil and military companies.” The first interview, which dealt with the origin, was concentrated and calm. Here, the little boy, filmed against the light, is distracted by the street and the difficulty of seeing the solution (LIGHT) to the problem (darkness). This second movement, which takes place in the morning, sets up this passage. It is no longer a question of chemistry, but of PHYSICS, of the operation of opening up to the light. The STORY of a photographic development further draws out the metaphor. [courtesy of newmedia-art.org] 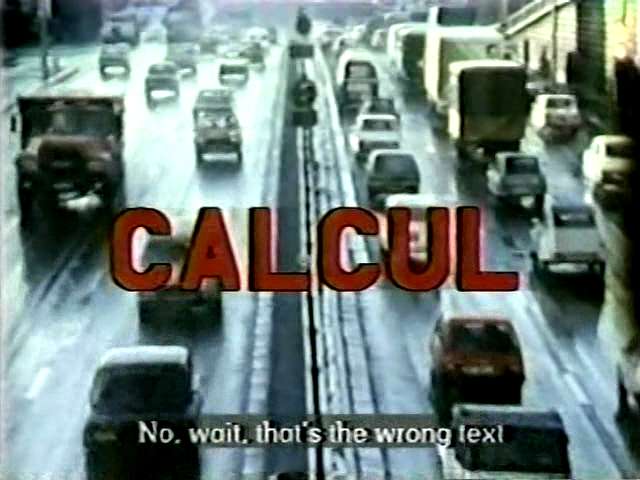 3rd mvmt:
Camille runs to school, as “the monsters” go to work, because it is part of the preordained course of their lives: “liberal ideas prohibited […] always the straight and narrow”, says the voiceover. Today’s lesson concerns the GEOMETRY and GEOGRAPHY of the mind and its ability to open up to the unknown. With a close-up on Camille, the reporter calls into question his preconceived ideas about the dimensions of the human being and the importance of work in his life (‘do you think of yourself more as a house or as a school?’). To round off the interview, the presenters propose a STORY about the different ways of becoming dissidents against the system and leaving the KNOWN. [courtesy of newmedia-art.org] 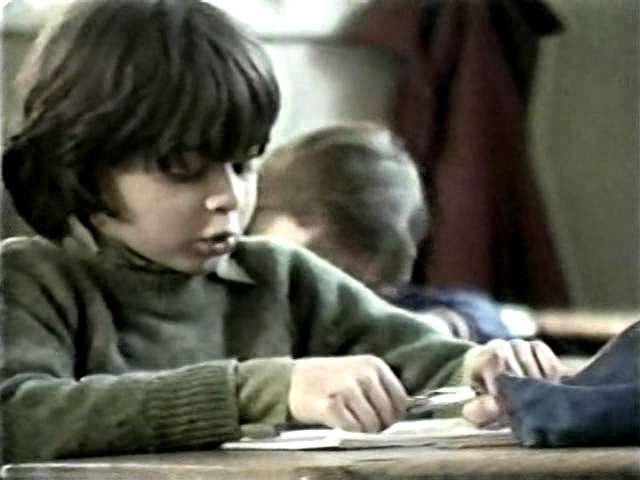 4th mvmt:
In the fourth movement, a fixed camera, “not a camera that watches but one that transmits”, films Arnaud in the classroom, without interviewing him as in the other programmes, based on the principle that the image itself contains enough information. To approach the UNKNOWN, it is sometimes necessary to forget TECHNIQUE. At school, they still know how to transmit the UNKNOWN through individuals and books, while in the world of the “monsters”, technique predominates: “The monsters would be incapable of understanding a human language.” To explain this phenomenon by means of a STORY, we are shown a woman who; although she desires the unknown, has become a machine through work.[courtesy of newmedia-art.org]

5th mvmt:
The fifth programme is based on all the possible meanings of the word IMPRESSION as a metaphor for submission due to the division of work. While Arnaud already uses a small duplicating machine, “the monsters have invented machines which dictate to them a series of orders that they obey”. Against this system, Jean-Luc Godard and Anne-Marie Miéville propose an attempt to see things differently by filming silence live (Arnaud does not always want to reply!). To fight against submission, they denounce, like extremist feminists ( a pregnant woman naked in front of her boss), men who “condemn the majority of women to dictation, to copying, to reproduction, and not to production”.[courtesy of newmedia-art.org] 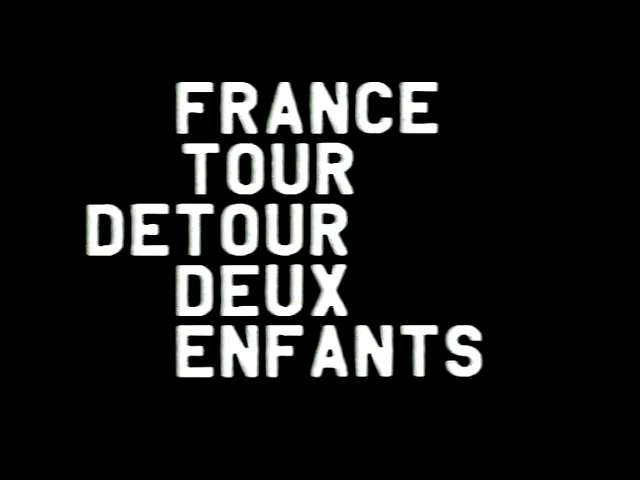 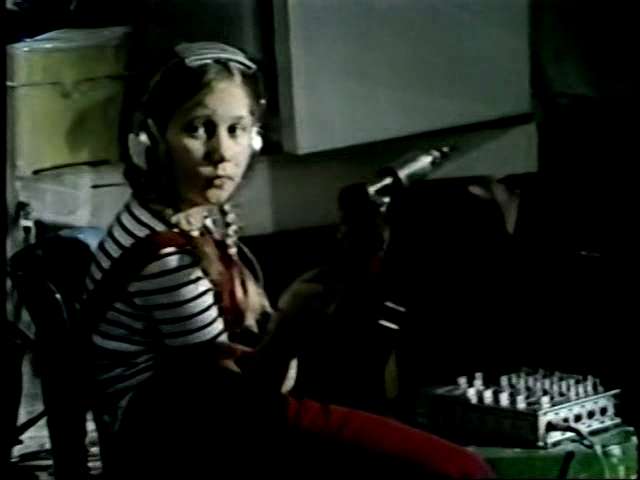 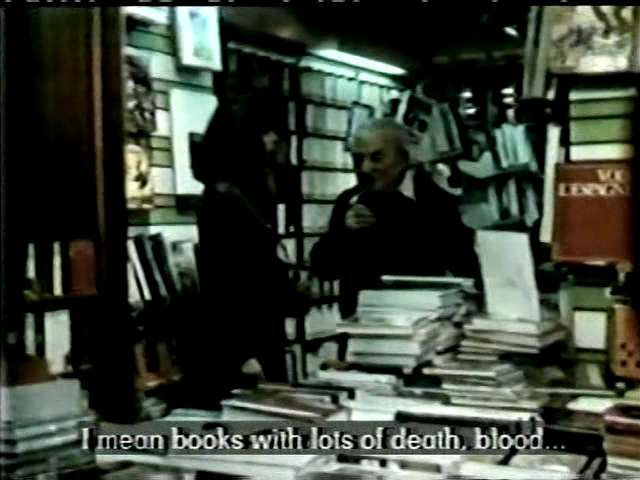 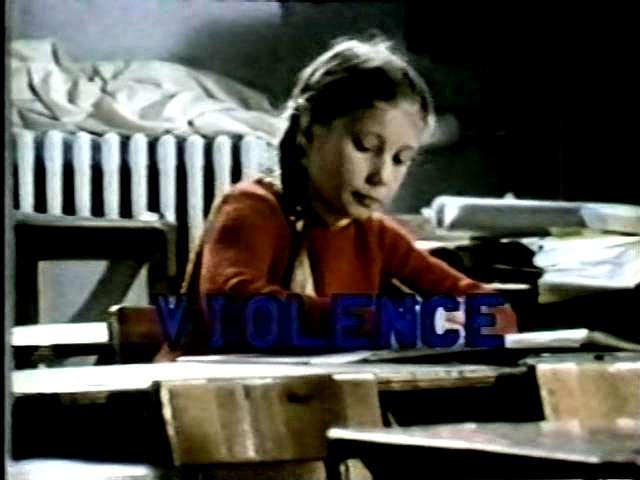 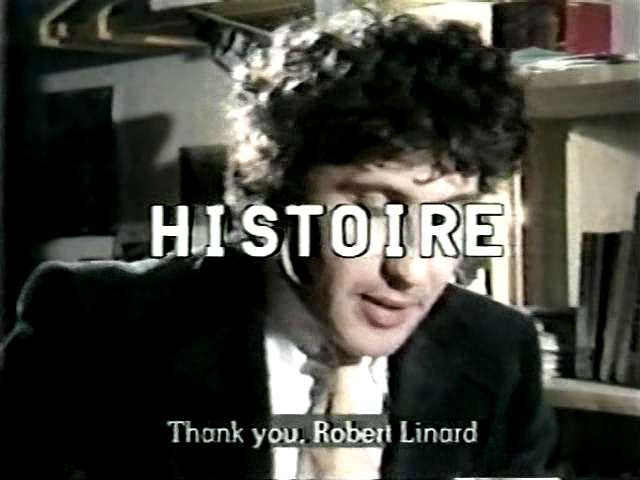 6th mvmt:
The style and the expression. 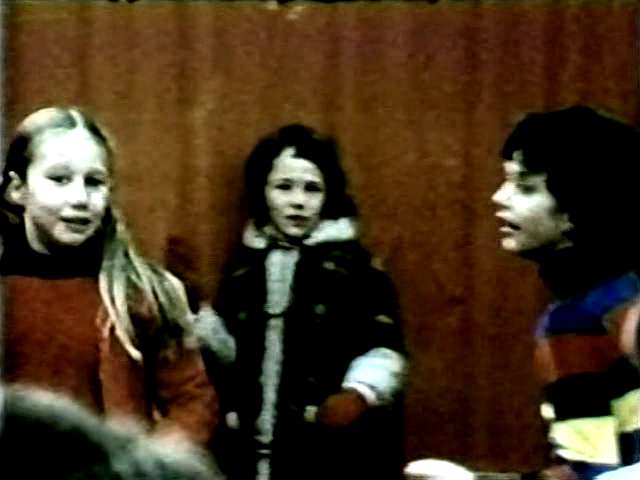 The shoutings at playtime.
Camille “punished” by TV.
Camille is interviewed by Robert Linard during the recreation. She’s consequently deprived of playtime at school and maybe she’s already meditating the price of fame answering laconically to the questions or maybe because she’s feeling the pressure of television watching her in this closed place named school where nobody can come and visit except TV here for the first time.
The history part is about another place where nobody can come and visit and we’ll learn how to link Solzhenitsyne and six girls running near the Parisian belt in a concrete setting. 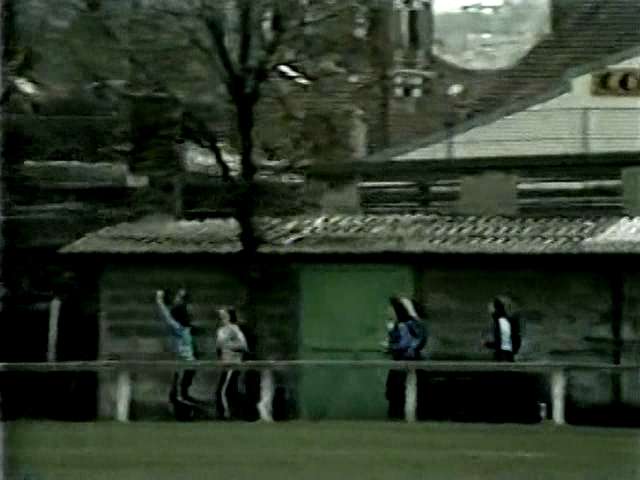 7th mvmt:
Violence, imitation, copy.
Camille is punished by her teacher and is “multiplying” 50 times “I must not talk in class“… and trying to answer questions about original, unique and copy, imitation.
She seems sometimes afraid to answer wrongly or simply to take the word. 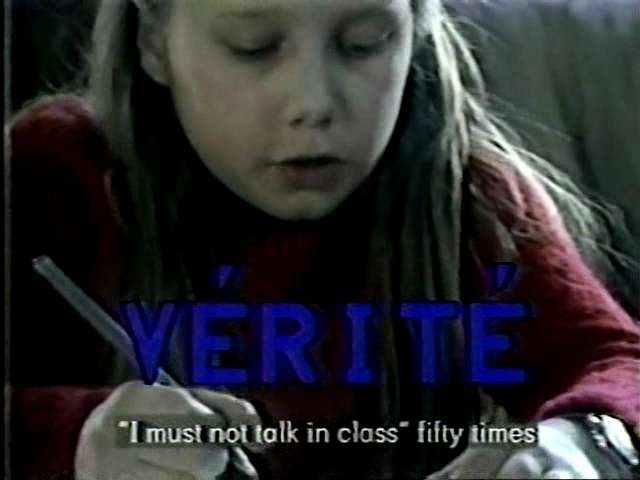 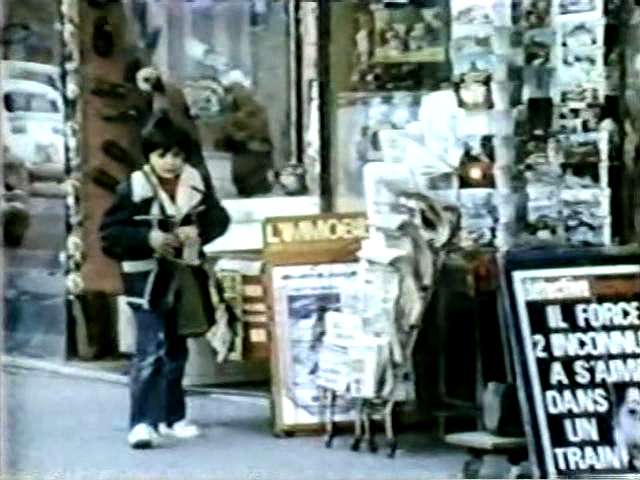 Arnaud’s stealing sthg in a store and running in the street, then answering with a friend (disorder) about business. Robert Linard shows 1 million francs to the children.

9th mvmt:
Power. Music. Monsters in supermarkets.
Camille just went back from school and is looking at a magazine or comics. Robert Linard would like to know from her what is more powerful? Image or sound?
Have she heard of revolution?
Would she buy a record of God’s voice? Why were the Sirens dangerous? 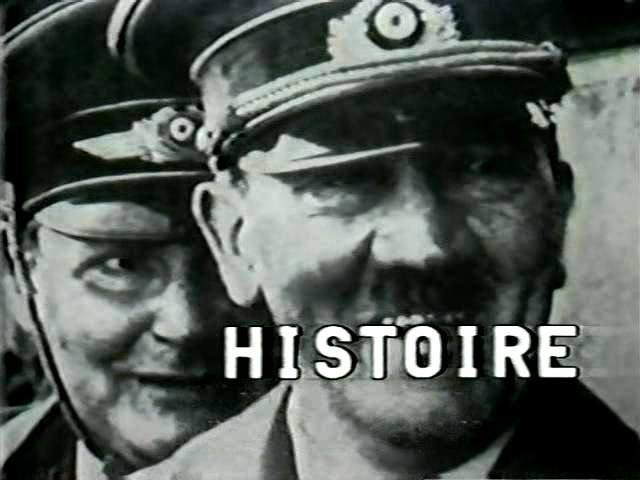 10th mvmt:
Novel. Economy.
A scene in a library who could remind the beginning of Pierrot le Fou, for example…
or 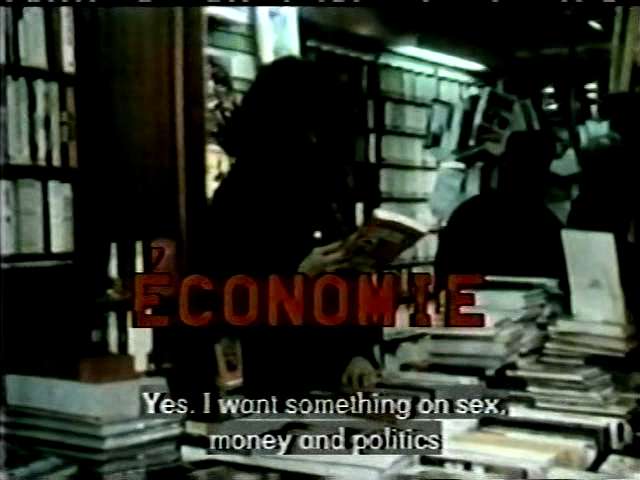 Arnaud is watching TV and trying to separate real from unreal.
Ending with real animals and imaginary books.

The monsters and what’s particular in life evolution. The daily breadand supper, young brother, the parents and a friend are here, Robert Linard and Camille don’t talk this time, just an intervention of the journalists. 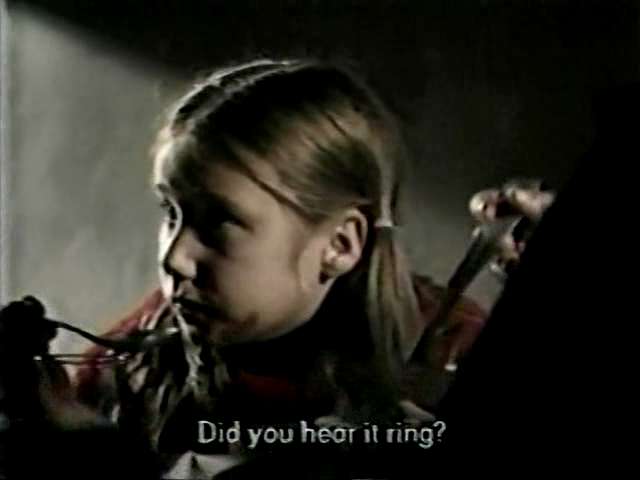 12th mvmt:
Arnaud’s almost sleeping now. Robert Linard keeps him awake a little longer with questions about dreams and reality, obscurity and clarity, themes of the 1st movement and closing the cycle of the 12th movements with questions already asked Camille: “Night, is it space or time?” “Do you think you have an existence? One or several?”