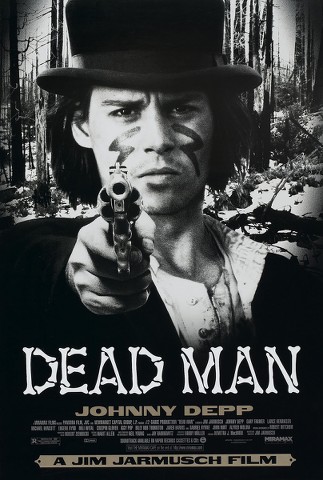 Jim Jarmusch’s Dead Man, a disturbing, mysterious black-and-white western, opens with someone named William Blake (Johnny Depp), a recently orphaned accountant from Cleveland, traveling west on a train with the promise of a job at a metal works in a town called Machine. He keeps dozing off and waking to new sets of fellow passengers, including several who fire their guns out the windows at a herd of buffalo. (Such occurrences were common in the 1870s, encouraged by the government as a means of wiping out Indians by eliminating one of their staples; in 1875, over a million buffalo were slaughtered.)

When Blake arrives at his destination–a nightmarishly squalid settlement of festering meanness and pollution–he’s told derisively by both Dickinson (Robert Mitchum), the blustering, hostile metal-works owner, and one of his henchmen (John Hurt) that they no longer need an accountant, having filled the position some time ago. After repairing to a saloon to spend the remainder of his meager supply of cash on a small bottle of whiskey, Blake runs into a former prostitute named Thel (Mili Avital) selling paper flowers and winds up in bed with her. Later that night Thel’s former lover (Gabriel Byrne)–who happens to be Dickinson’s son–bursts in and, after a brief exchange, shoots her dead and seriously wounds Blake in the chest with the same bullet. Grabbing Thel’s bedside pistol, Blake fires back three times, eventually hitting his assailant in the neck, and makes a clumsy getaway on the man’s pinto after falling out the window. 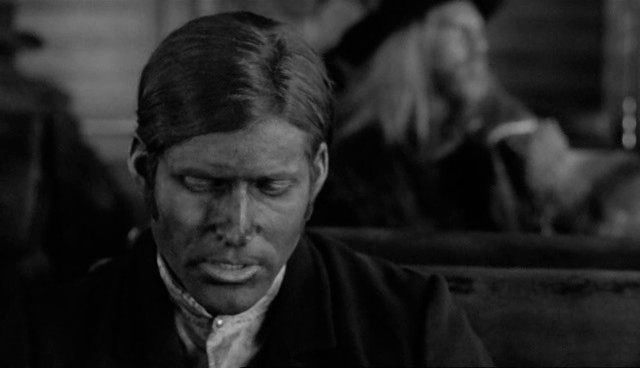 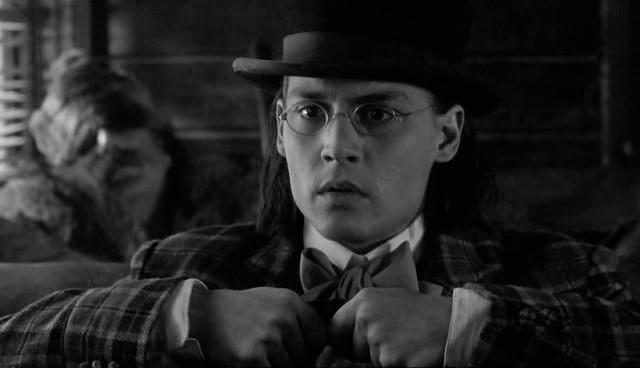 The first of many violent episodes in the film, this one sets the tone for Jarmusch’s distinctive, unnerving handling of violence. (“Why do you have this?” Blake asks Thel, fingering her gun before her former lover turns up. “‘Cause this is America,” she explains.) Every time someone fires a gun in this movie, both the gesture and its result are awkward, unheroic, even downright pitiful; it’s a messy act devoid of any pretense of stylishness or existential purity, creating a sense of discomfort and embarrassment in the viewer usually expressed in laughter. In this respect, it’s the reverse of the expressionist forms of violence taken for granted in commercial moviemaking ever since Bonnie and Clyde and The Wild Bunch, and recently granted a second life by De Palma, Woo, and Tarantino, among others: Jarmusch refuses to respect or valorize bloodshed. The film is no less honest about the allure of murderers in our culture; as Blake is gradually transformed into a cold-blooded killer, he takes on some of the “legendary” aura of a media star. 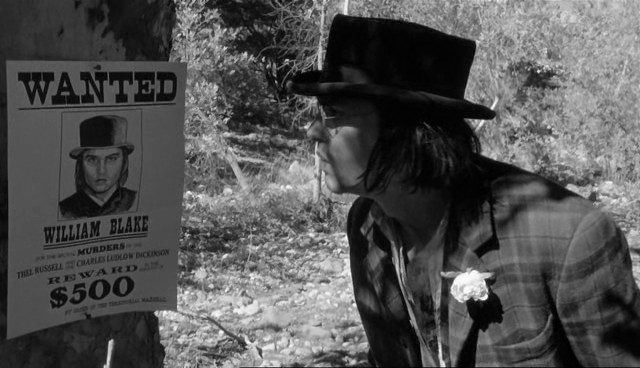 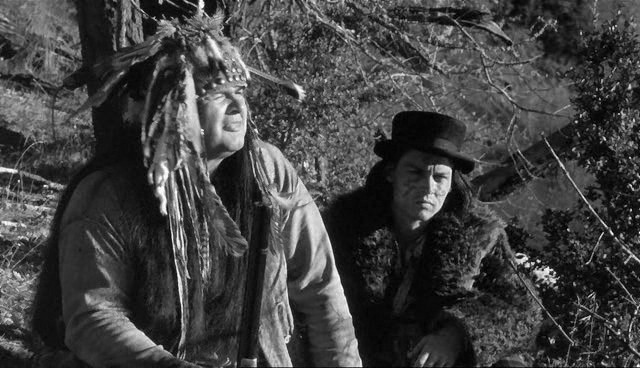 The next day in the woods we see Nobody (Gary Farmer)–a Native American outcast who’s half Blood and half Blackfoot–trying without success to remove the bullet close to Blake’s heart with a knife. Despite some mutual problems in understanding each other, they become riding companions. (Nobody, who was once taken as a prisoner to England and is well versed in the poetry of William Blake, is convinced that this Blake is the poet himself; Blake, who’s never heard of the poet, thinks that Nobody is crazy.) Nobody guides Blake through the wilderness toward the northwest coast, in effect leading him toward his own death. As Nobody points out, because the bullet in Blake’s chest can’t be removed, he’s already a dead man, and the remainder of the film is devoted to Blake’s adjustment to this fact. (It may be the most protracted death scene in movies; by comparison, Garbo’s death in Camille is a quickie.) In the meantime Dickinson has dispatched three bounty hunters to bring Blake back dead or alive, and he later offers rewards to various marshals and other bounty hunters. Putting a price on Blake’s head ensures plenty of skirmishes on their trek to the northwest.

There are several ways to categorize Jim Jarmusch’s six features to date. There are three in color (Permanent Vacation, Mystery Train, and Night on Earth), and three in black and white (Stranger Than Paradise, Down by Law, and Dead Man); clearly the second group is superior. Some have solitary heroes (Permanent Vacation and Dead Man), and some have clusters of heroes (the other four); the choice between these groups is much harder, because the first includes both Jarmusch’s thinnest and richest work–an apprentice piece and a masterpiece, both about solitude–and the second gives us another sort of movie altogether, minimalist entertainments in a theme-and-variations form.

With the enormous success of his second feature in 1984–Stranger Than Paradise, playing at midnight this Friday and Saturday at the Music Box–Jarmusch became a figurehead for American independent cinema. He’s steadily rejected all Hollywood offers since (echoed in the response of LA taxi driver Winona Ryder to show-biz agent Gena Rowlands in the first episode of Night on Earth) and has cultivated a hip, international art-house reputation by acting in the films of such friends as Alex Cox, Robert Frank, Raul Ruiz, and the Kaurismaki brothers–creating a model for independence that combines the conviviality of the French New Wave with some of the down-home brashness of storefront theater.

Some viewers profess to have found a similar mix in Quentin Tarantino, but as far as genuine independence is concerned, there’s no contest. Jarmusch owns the negatives of all his features–something no Sundance favorite, including Tarantino, can claim. And not even Miramax, the most powerful American art-house distributor, has succeeded in wresting the final cut of Dead Man away from its writer-director–and don’t think it hasn’t tried. By contrast, Tarantino invites Miramax into his cutting room and happily relinquishes final control over his work for the sake of the distributor’s full support. He’s even been rewarded for his cooperation with his own distribution subsidiary at Miramax, Rolling Thunder, whose first two releases were Chungking Express and Switchblade Sisters.

With the help of unabashed Sundance and Miramax supporters like the New York Times’s Janet Maslin–journalists eager to promote film as a business over film as an art, and therefore ready to place the future of cinema in the hands of producers rather than artists–the popular model for so-called American independence has now passed from Jarmusch’s freedom to Tarantino’s servitude. Take a look at the mostly negative American reviews of Dead Man and you’ll see Maslin is far from alone in this bias. Mainstream reviewers nowadays judge even big-budget commercial fare by the same rule-book prescriptions: though Jim Carrey is presumably powerful enough now to make some artistic choices of his own, he’s expected to adhere to the guidelines established in Ace Ventura and The Mask and not take any disturbing risks, as he does in The Cable Guy. (Though in this case the public already seems well ahead of the New York Times and Variety.)

Are we so dependent on movies that come to us exactly where we are–that flatter our current prejudices and enthusiasms and stroke our well-trained reflexes–that we can no longer sit still for movies that require even a modicum of adjustment? In New York, where Dead Man opened six weeks ago, the lack of comprehension–apart from a perceptive rave by the Village Voice’s J. Hoberman and a couple of other reviews–has been close to total. Among the national reviews I’ve seen, David Ansen’s in Newsweek is a welcome relief from the rest. The New Yorker, which has been cluing us in to the high art of Boys and Mission: Impossible in extended reviews, didn’t even bother to review this picture in a capsule; and for all the film’s remarkable literary distinction, one can safely assume the New York Review of Books would sooner waste its pages on the latest Jane Austen film adaptation. Johnny Depp as William Blake and Gary Farmer as Nobody The One and Only Robert Mitchum as John Dickinson