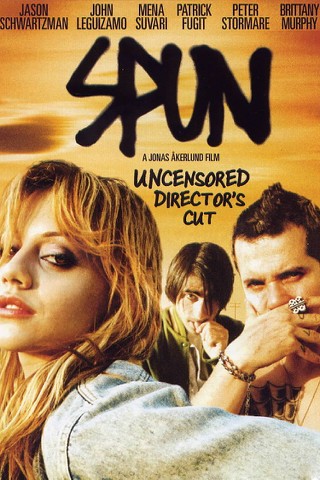 Quote:
This roller coaster ride depicting four days in the life of a group of speed freaks has a real gay feel to it. Blondie diva Deborah Harry plays a nosy man-hating, butch-dyke neighbor who steals the girl, Eric Roberts dives right into the role an over-the-top totally queenie drug dealer adorned on both sides by hunky Abercrombie and Fitch-type models. Openly gay Alexis Arquette butches it up as a drug-addicted cop with some wild sunglasses. A heavily tatooed ex-Judas Priest frontman Rob Halford (who it is rumored was booted out of the band for coming out) makes an appearance as the manager of an adult video arcade. And sexy John Leguizamo spends most of the film either half dressed or undressed as he performs a hilarious extended masturbation scene wearing only a sock over his dick. All this, a great story and a terrific soundtrack (and cameo) from ex-Smashing Pumpkin Billy Corgan.