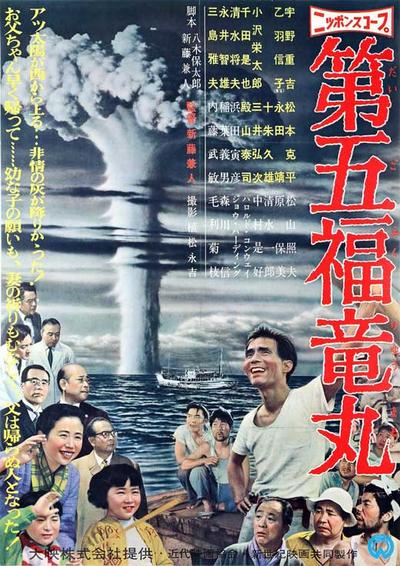 Quote:
Daigo Fukuryū Maru (第五福龍丸?, Lucky Dragon 5) was a Japanese tuna fishing boat, which was exposed to and contaminated by nuclear fallout from the United States’ Castle Bravo thermonuclear device test on Bikini Atoll, on March 1, 1954. Kuboyama Aikichi, the boat’s chief radioman, died half a year later, on September 23, 1954, suffering from acute radiation syndrome. He is considered the first victim of the hydrogen bomb of Operation Castle Bravo.

Five years after the accident, the Japanese film director Shindo Kaneto made a film titled Daigo Fukuryu Maru. The actor Uno Jukichi played the role of Kuboyama Aikichi. Director Kaneto Shindo spoke at a screening of his 1959 film ”Daigo Fukuryu Maru” (Lucky Dragon No. 5), emphasizing the need to abolish nuclear weapons and to continue educating youth about the devastation they cause. ”Nuclear arms have been an issue since World War II,” the 91-year-old told an audience of over 90 people, citing this week’s multilateral talks in Beijing on North Korea’s nuclear ambitions. ”They can wipe out the human race.”

Shindo, whose film is a reconstruction of the events that befell the Lucky Dragon, also criticized nuclear nations who talk about eliminating weapons but do nothing. In the audience were Yuko Teramura, 56, and her sister Tomoko, 53. They played the young daughters of crewman Kuboyama Aikichi, who died soon after the fallout, in Shindo’s film when they were 6 and 3 years old respectively. ”I believe film is the best medium to teach children about the destructiveness of nuclear weapons,” Tomoko Teramura told Kyodo News. ”It has a greater impact than just spoken or written words.”