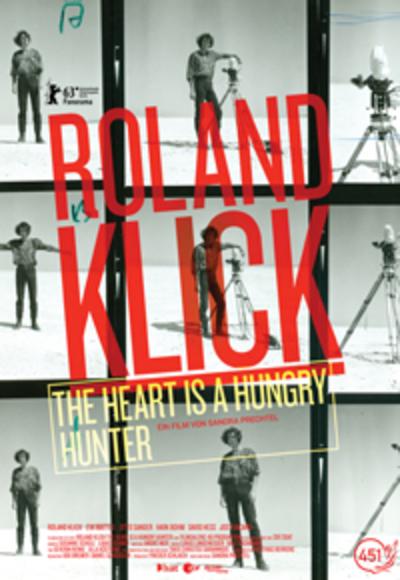 Synopsis: The gritty, kinetic, visionary cinema of Roland Klick is ripe for rediscovery. After shooting with international stars, such as Mario Adorf and Dennis Hopper, Klick celebrated international success and achieved cult status. Yet after making only six features, he disappeared from the scene in a rather mysterious way. The story of an uncompromising film maniac.

“He was a dreamer inside a German – not an easy thing to be!” recalls actor David Hess about director Roland Klick, in whose 1983 film White Star he appeared. Klick made this film, as he tells Sandra Prechtel in her documentary, in order to get over his Waterloo: widely regarded as the great white hope of German cinema at the time, Klick had recently been ousted as director of the film Wir Kinder vom Bahnhof Zoo. With their bid to abolish the ‘ostensible contradiction of art and box-office’ Klick and producer Bernd Eichinger should have been a dream team but they fell out over their conflicting ideas about working with ‘children’. Eichinger was not convinced by Klick’s personal approach.

Klick is still all for the personal approach; in The Heart is a Hungry Hunter this director who defies all categories reveals himself as humorous and far from embittered. Excerpts from his films and comments from contemporaries such as Eva Mattes, Otto Sander and Hark Bohm round off this portrait of a class-conscious director; a man for whom film was not about ‘telling those up there about those down there’, but who also made his films for those who otherwise probably don’t give a hoot for cinema.

At the age of fourteen Roland Klick was certain: cinema was what his soul was longing for. Filmmaking as an adventure, existential experience and escape from overstructured German post-war reality. The film director as explorer and foreign legionnaire, in search of himself.

Roland Klick, the director of films such as DEADLOCK (with Mario Adorf) and WHITE STAR (with Dennis Hopper) has an exceptional position in German cinema. Maladjusted to the forms of New German Cinema of the 1970s, too imaginative and unconventional for commercial cinema, Klick was marginalized by the critical establishment. Although his films won several German Film Awards, were international acclaimed and achieved cult status, Klick was written out of history. His dystopian punk-rock odysseys, acid-drenched Westerns and youth-oriented crime dramas are now ripe for rediscovery.

ROLAND KLICK – THE HEART IS A HUNGRY HUNTER by Sandra Prechtel (80 min), a documentary about one of the most extraordinary directors in the history of German film, is premiering at the Berlinale 2013.