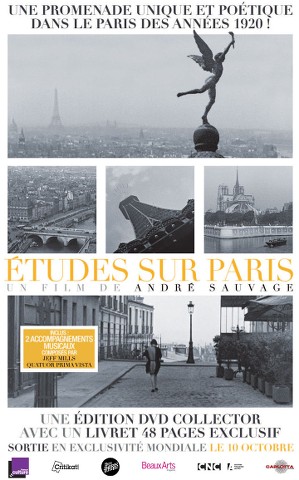 André Sauvage’s Études sur Paris has long takes, improvised shots, no special effects, music or plot—essentially unwatchable to devotees of today’s wiz-bang, graphics-heavy documentary vocabulary. Long before tourist bureaus produced pastry-puff shorts or anybody could shoot a space full of holes with their cameraphone, field documentation was a select sport. To be a shooter required strict patience, an adroit sense of composition, and a willingness to lose (and maybe more importantly, money to pay for) film. If less political in the assemblage of its pieces, this is a film that that rubs shoulders with Man With A Movie Camera, Manhatta or Symphony of a Metropolis.

Études opens on the Seine, the camera bobbing and weaving to keep things interesting—a linear record of unquenchable curiosity. Passing ports or boats, Sauvage strains to include humans in the frame without dominating it; this being 1928, the director seems careful to preserve the city’s stature as a triumph of urban planning. There’s a diligent spread of master shots on monuments, busy train stations, canals, pillars and boulevards. You could fill a warehouse with the riches on display here: handhelds, tracks, dollies, scenes filmed from boats, cars and horse-drawn carriages. (And that’s just behind the camera!) This luxuriant approach betrays an abiding respect for human privacy, ironically, because Sauvage seems happy with people at a distance or with their backs to the lens—just as long as the image is true.

The film suggests Paris less as a miracle of industry or a well-oiled machine—popular approaches between WWI and WWII—than as an open plane dotted with great vantage points. There’s no clear artistic statement inherent in Sauvage’s design, but the deeper he penetrates Paris’ interior, the more people turn up onscreen—strolling, working, playing. Each shot takes on its own micro-narrative properties, which is where Etudes sur Paris becomes porn for peoplewatchers. Are those kids siblings? Who’s she waiting for? What’s being built here? What are those two ladies in that boat laughing about? If you get swept up in it, you’ll wish you’d been able to spend more time with them, and so the film comes highly recommended. In these uptight times, some documentaries are dense essays, and most are commercials for themselves. But this one, in its 83rd year, is nothing more and nothing less than a vigorous jaunt among the living.