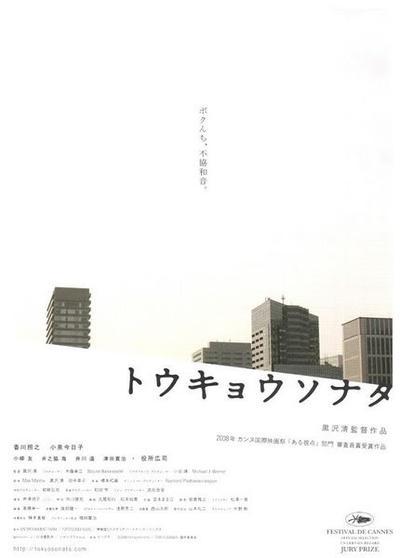 Quote:
After a retreat to the atmospheric and spectral Loft and Retribution that reinforce Kiyoshi Kurosawa’s reputation as a horror filmmaker, Tokyo Sonata continues in the vein of his idiosyncratically personal (and arguably, more interesting), yet equally unsettling films that began with Bright Future. As the film begins, the family patriarch, middle-aged senior administrative manager, Ryuhei (Teruyuki Kagawa) has been notified that the company has outsourced his job to China (where his salary would pay for three language-fluent office workers) and, without portable skills that could be applied to another department, will be immediately laid off from work. Reluctant to tell his family for fear of undermining his authority, Ryuhei continues the pretext of leaving for work with his briefcase each morning, spending his days alternately lining up at a job placement office and a charity lunch service on the park.
Meanwhile, his stay-at-home wife, Megumi (Kyoko Koizumi), has begun to feel trapped in her unappreciated role of keeping the household together, her newly obtained driver’s license symbolizing her liberated, if guilty step away from the familiar routines of domestic life (a search for identity implied by her intended use of the license as a form of identification). Their university-aged son, Takashi (Yu Koyanagi) is similarly adrift in his part-time job distributing flyers on the streets, and sees a provision for foreigners enlisting in the U.S. military as a means of asserting his independence. Younger son, Kenji (Kai Inowaki), having been caught passing a manga book in the classroom, stages his own minor rebellion: exposing the teacher’s own penchant for reading erotic themed manga on the train, and subsequently, taking piano lessons against his father’s objection. Inspired by the four-movement structure of a sonata, Tokyo Sonata is a humorous and incisive modernist (and globalist) evocation of the shomin-geki salaryman picture popularized by Yasujiro Ozu, chronicling the increasingly divergent lives of the Sasaki family who, like the families in Ozu’s cinema are on the verge of disintegration. However, while both filmmakers reflect the inevitability of this dissolution, Kurosawa paradoxically sees the rupture as a necessary trauma towards rebuilding – a sense of renewal that is reflected in the parting image of the family leaving the stage, figuratively stepping away from the performance to forge their own path in the uncertain darkness.