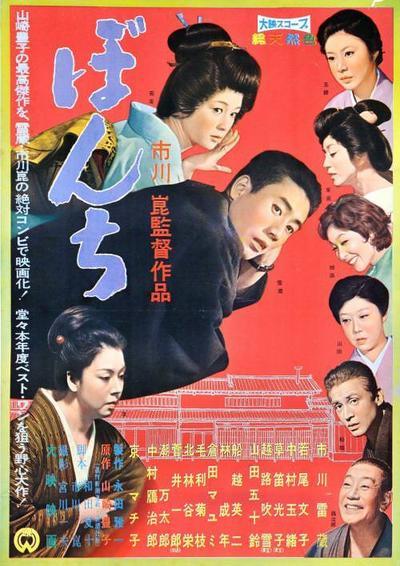 Where Ichikawa skewered patriarchal family values in Her Brother, in this savage satire he hoists the matriarchal system on its own apron strings. Raizo Ichikawa (“in his best role yet”-Variety) is the scion of an Osaka merchant family whose traditional power is matrilineal. Instructed by his overbearing mother and grandmother to give them an heiress for the family business, he stands by helplessly as wife after wife is thrown out of the house for producing sons. Driven to a life of dissipation-his mistresses also fail to produce daughters-in the end he is just too tired to care. Ichikawa’s frighteningly funny picture of the matriarchy’s efforts to perpetuate itself was received as antifeminist, if not downright misogynistic, but Joan Mellon suggests that the target once again is “the institution of the family [which] places its own survival ahead of the needs and feelings of individuals.” If this looks forward to The Makioka Sisters, so does Donald Richie’s comment, “We find this cruel matriarchal story…told in terms of the most transcendental beauty.”