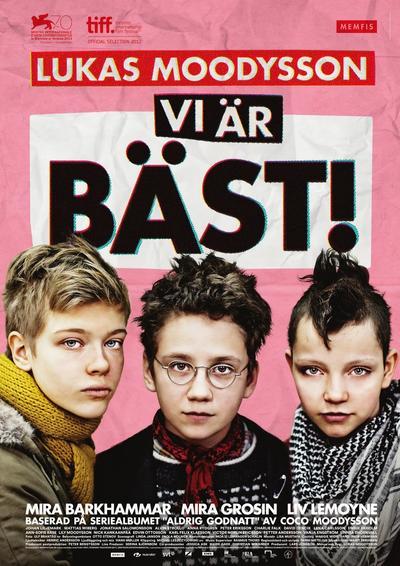 Stockholm 1982. A film about Bobo, Klara and Hedvig. Three 13-year old girls who roam the streets. Who are brave and tough and strong and weak and confused and weird. Who have to take care of themselves way too early. Who heat fish fingers in the toaster when mom is at the pub. Who start a punk band without any instruments, even though everybody says that punk is dead. ~ trustnordisk

With the ebullient and raucous We are the Best!, Swedish master Lukas Moodysson returns to the territory he mined in his first two features, Fucking Åmål and Together. Set in early 1980s Stockholm, the film focuses on three girls, Bobo, Klara and Hedvig — outcasts who are about to enter their teenage years, and share little with their classmates. The other girls are offended by their independence and the boys just don’t like their punk-influenced style and bravado. They’re even less enamoured of the trio when they start their own band — that’s something only boys should be doing. The adults are even more useless. Bobo’s mother is a serial dater who’s into partying and seldom knows where Bobo is. Klara’s parents are gruesomely happy (when they’re not arguing about ridiculous stuff), and Hedvig’s mom is a devout Christian. Based on a graphic novel, We are the Best! is a paean to DIY culture and the need for revolt. Neglected or taken for granted at home and school, the girls react by making themselves unignorable, sporting mohawks and brush cuts. When they’re mocked for looking different they demand centre stage. Psychologically accurate and energetic, with a profound awareness of how kids behave and what motivates them, We are the Best! pays tribute to the accidental rebels who object to the system instinctively as much as intellectually — and have the courage not to hide their opposition to it. It’s propelled by a skilled ensemble cast led by the three young principals, who make everything from fights over the same boy to your first public spew utterly poignant and believable. ~ tiff