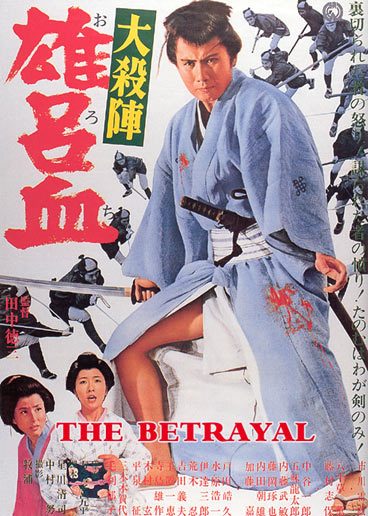 An absolutely fabulous film, featuring an extended fight scene (~10minutes!) that is the best since SWORD OF DOOM! Far and away Raizo Ichikawa’s best fighting ever!!! He plays an honorable clan retainer and assistant sword instructor who goes on the road after the lord’s nephew murders a neighboring clan samurai, thus taking the heat for the crime. His trusting nature leads only to the ultimate betrayal.

Review from Weird Wild RealmWeird Wild Realm:
Tokuzo Tanaka was a veteran chambara director whose works ranged from the sublime to the ridiculous.
In the latter category of the ridiculous is Sasabue Omon or The Girl With the Bamboo Leaves (Daiei, 1969), from a recycled Zatoichi script which replaces the blind swordsman with a young woman (Michiyo Yasuda) who fights with bamboo leaves. Supporting cast included Takeshi Date as Chokichi, Manami Fuji as Oen, & Rytaro Gomi as Jirokichi.
Championing the weak, “Bamboo Omon” uses bamboo leaves like shurikens, & bamboo branches with leaves intact like a sword. Bad guys with real swords are helpless against her swishing branches. When she throws her deadly leaves, really bad animated leaves are drawn into the fight scenes, zipping around & cutting people. As if that ain’t dumb enough, her costume is rather too close to a miniskirt or a Robin Hood outfit.
When the script was first filmed with Shintaro Katsu as Masseur Ichi, it wasn’t too bad a story, but on this re-do, both the costuming for the heroine, & her alleged “weapon,” never rise above the absurd.
While I might agree the kind of papercuts you can get from bamboo leaves are annoying, nothing in the image of a slip of a girl hopping about & swiping her leaves at bad guys who have actual swords looks like a real fight.
It’s truly a damnable low effort even for B chambara, which tended on average to be fairly good films in the 60s, but not this time. It’s especially surprising how bad the film is, since Tanaka directed fair to good films most of the time, including early Zatoichi episodes which helped set the tone of the long-running series, & the Hoodlum Soldier series which likewise starred Katsu.

Tanaka started out under the wing of the great Kenji Mizoguchi, & was first assistant director on Mizoguchi’s masterpiece Ugetsu monogatari (1953). And Tanaka on his own had at least one truly brilliant film, Daisatsujin orochi (The Betrayal, 1966) starring Raizo Ichikawa, whom Tanaka also directed in one of the Full Moon Swordsman/Sleepy Eyes of Death films.
The Betrayal aka Great Slaughter & the Serpent co-starred Raizo’s favorite leading lady Shiho Fujimura as the girl who trusted, helped, & was not rewarded for her goodness. There are supporting roles from Kaoru Yachigusa & Ichiro Nakaya, & a superb script by Seiji Hoshikawa. Cinematographer Chishi Makiura was responsible for the look of many well-known films about Zatoichi, Lone Wolf with Child, the Full Moon Swordsman, as well as some moody period kaidan or ghost films.
I first saw Daisatsujin orochi on an enormous screen in scope at the now long lamented Kokusai Theater in Seattle. When I staggered out of the theater I was weak-kneed, dry-mouthed, & overawed. It was one of a handful of times I felt that a virtually unknown film should be regarded as a classic. Thirty years later it is finally available as a subtitled DVD, but still hard for just anyone to see it, as it’s not the sort of film to show up in most rental stocks.
The black & white cinematography has a classic, gloomy gorgeousness. As the story unfolds, a naively honorable samurai (played by Raizo) comes to the bitter realization that his devotion to moral samurai principles makes him an oddity among his peers, & a very vulnerable oddity in consequence.
He takes the blame for the misdeeds of others, with the understanding that he will be exiled for one year & restored to the clan’s good graces after the political situation dies down. But as betrayal begins to heap upon betrayal, he realizes he’ll have to live out his life as a masterless ronin, if not hunted down & killed. This film will stand alongside Harakiri (1964) starring Tatsuya Nakadai & Bushido Samurai Saga (1963) starring Kinnosuke Nakamura as a great “anti-samurai” or “cruel jidai-geki” film with brutal realism & its attendant emotional distress.
The extended one-against-all swordfight that concludes the tale is shot with a horrific degree of reality. Our hero becomes grotesquely weary, his hand clutched so tight to his sword’s hilt that when it breaks off, he has trouble letting loose of it in order to take up another sword. He becomes so dehydrated from exertion that he begins staggering weakly & has to try to get water from a well as multiples of foe wait for the moment when he is least on guard. At the similarly protracted conclusion of Sword of Doom (1966) to which The Betrayal has been compared, Tatsuya Nakadai with his evil but undefeatable sword style is like an elemental being from hell. But Raizo in a similar one-against-all whirlwind is like an innocent figure trapped in hell, battling against his will & as much in terror of his own actions as he is of what would happen to him if he stopped. Ten minutes of non-stop carnage begins with his one-against-all-yakuza, then one against his entire clan, & just when it seems impossible to go on, one against all the rival clan, even though by then they are willing to admit it no longer seems believable that a swordsman of his ability was guilty of the rear-attack murder that started this fiasco. Even acknowledged as innocent, samurai pride will not permit the carnage to stop. Whether or not he can survive, with our hero’s hard breathing, staggering weariness, at times barely able to stand, it is tortuous & agonizing to watch him. The final images of Raizo’s worn-down figure still standing, if only barely, above the carnage, with his girlfriend (Kaoru Yachigusa) knelt before him, has less a sense of victory about it than a sense of appalling disgust with a warrior culture that could lead to such a monstrous moment.

2018-10-18
admin
Previous: Michael Winterbottom & Kevin Brownlow – Cinema Europe: The Other Hollywood (1996)
Next: Philippe Falardeau – La Moitié Gauche Du Frigo AKA The Left-Hand Side of the Fridge (2000)