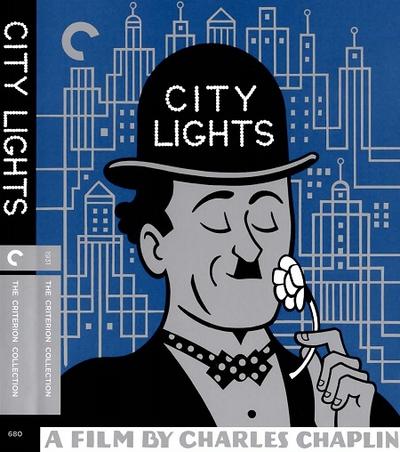 Quote:
The Tramp meets a poor blind girl selling flowers on the streets and falls in love with her. The blind girl mistakes him for a millionaire. Since he wants to help her and doesn’t want to disappoint her, he keeps up the charade. He befriends a drunk millionaire, works small jobs like street sweeping, and enters a boxing contest, all to raise money for an operation to restore her sight.

CHAPLIN HILARIOUS IN HIS ‘CITY LIGHTS’; Tramp’s Antics in Non-Dialogue Film Bring Roars of Laughter at Cohan Theatre. TAKES FLING AT “TALKIES” Pathos Is Mingled With Mirth in a Production of Admirable Artistry.

Charlie Chaplin, master of screen mirth and pathos, presented at the George M. Cohan last night before a brilliant gathering his long-awaited non-dialogue picture, “City Lights,” and proved so far as he is concerned the eloquence of silence. Many of the spectators either rocking in their seats with mirth, mumbling as their sides ached, “Oh, dear, oh, dear,” or they were stilled with sighs and furtive tears. And during a closing episode, when the Little Tramp sees through the window of a flower shop the girl who has recovered her sight through his persistence, one woman could not restrain a cry.

Mr. Chaplin arrived in the theatre with a police guard, and after greeting some of his many friends in the house he took an aisle seat beside Miss Constance Collier. When the picture came to an end he went to the stage and thanked those present for the enthusiasm with which they had received his work.

It is a film worked out with admirable artistry, and while Chaplin stoops to conquer, as he has invariably done, he achieves success. Although the Little Tramp in this “City Lights” in some sequences is more respectable than usual, owing to circumstances in the story, he begins and ends with the same old clothes, looking, in fact, a trifle more bedraggled in the last scene than in most others of his comedies. He has the same antics, the same flip of the heel, the same little cane, mustache, derby hat and baggy trousers.

Here one comes to the conclusion that Chaplin is in many respects the O. Henry of the screen, for he has twists to his sequences that are just as unexpected as those of the famous short story writer.

This tale happens in any city. It seems to be a mixture of Philadelphia, London, New York and Hollywood. And in the beginning the comedian takes a fling at the talking pictures, revealing by incoherent sounds that one can understand what is meant and also that these sounds are quite unnecessary. He wastes no time in getting down to comedy, for right at the outset is the episode wherein the Little Tramp is discovered in the arms of a central figure of a group of statuary that has just been unveiled.

Not long after that he meets the flower girl and with gentle suggestion it is conveyed to the spectator that she is sightless. This girl is impersonated by Virginia Cherrill, who by accident one night before the comedian, had cast his picture sat next to him at a pugilistic encounter in Hollywood. Under Chaplin’s unfailing guidance, Miss Cherrill gives a charmingly impressive performance.

Then there is the meeting of the Little Tramp and the Eccentric Millionaire, played by Harry Myers, who did so well in the old picture of Mark Twain’s “Connecticut Yankee at the Court of King Arthur.” This Millionaire loves the Little Tramp as a brother when he is in his cups, but when he is sober he does not recognize him, which naturally makes it most awkward at times for the Tramp, whose one aim in life is to get enough money together to pay a specialist to perform an operation on the blind girl’s eyes.

The first meeting between the Millionaire and the Tramp is when the Millionaire goes to a river embankment, bent on suicide, with a stone and a noosed rope in a suit case. The Tramp endeavors to persuade the Millionaire to abandon the idea of taking his life and the chapter of accidents ends in the Little Tramp being hurled into the water with the noose around his neck and the Millionaire having to officiate as the rescuer.

Perhaps the stretch that caused most merriment is where the Little Tramp finds himself in the prize ring facing a real pugilist. He darts about, always keeping, so far as is possible, behind the referee, and during some of the scenes the Tramp separates the referee and his antagonist. In any ordinary comedy the Tramp would have won the contest, but Chaplin wills otherwise.

The Millionaire gives the Tramp his expensive car. Thus the little fellow discovers himself thrown out of the house by the sober Millionaire, but he has a glistening car. Without a penny in his pocket and eager for a smoke he drives the automobile slowly along the curb and observes a man throw away a half-smoked cigar. Quick as a flash the Tramp leaps out of the car and, as he does so another tatterdemalion stoops to pick up the cigar. The Little Tramp, however, pushes the other man aside, looks at him as much as to say, “I saw it first,” then he picks up the butt and enters his lovely runabout.

After the Millionaire has taken back his automobile, the Tramp, in his efforts to get money for the blind girl, has his worries as a street cleaner. Then he has the great satisfaction of again falling into the arms of the Millionaire, happily intoxicated. The Tramp unfolds the pathetic story of the blind girl and the Millionaire in a most generous mood peels off more than a thousand dollars in bills. Burglars are in the house and in the course of the excitement the Millionaire sobers up, with the consequence that the Little Tramp has to scoot away. He succeeds in giving the flower girl the money, but cannot evade spending a few months in prison.

At the film’s end is a beautifully poetic bit, with the little fellow peering in at the window of a flower shop and recognizing the hitherto blind girl who has recovered her sight and does not, of course, know him. She laughs at him, and through another masculine figure, well dressed, one realizes that she imagines that her hero must look like this individual. A touch of the hand, however, reveals that the humble, little chap with the torn trousers and odd mustache, is her benefactor.

The synchronized music score helps the movement of this comedy. It was composed by Chaplin and arranged by Arthur Johnston. There are times when the notes serve almost for words and so far as sound effects go, Chaplin won gales of laughter last night when the Tramp swallows a whistle and every time he breathes he whistles. This sound interlude was made the most of, for the whistle calls cabs and dogs and angers a host of people. 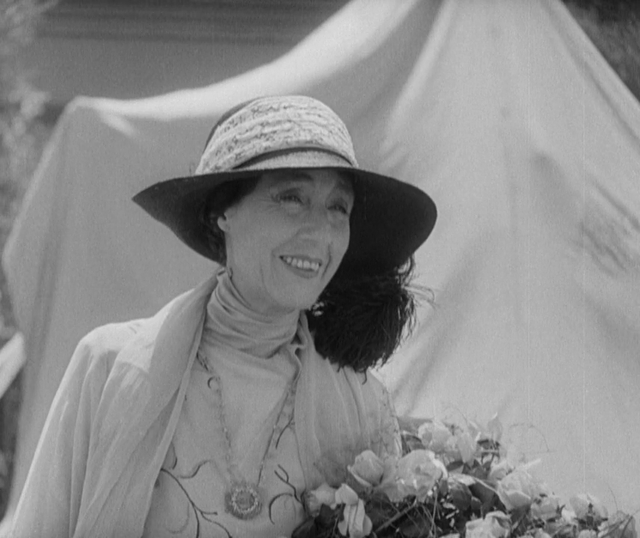 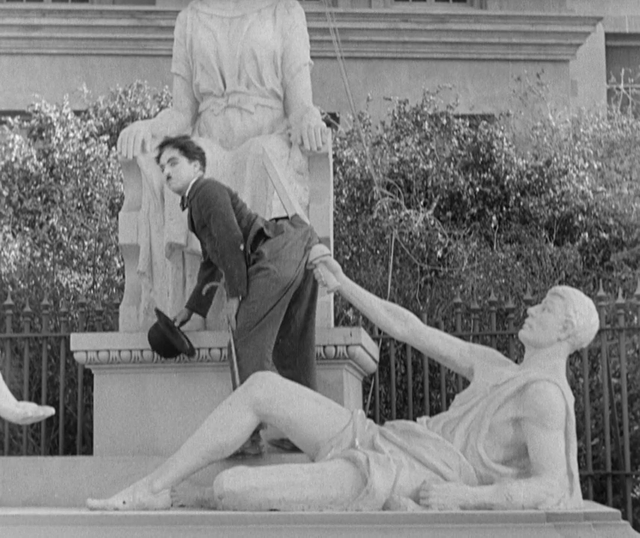 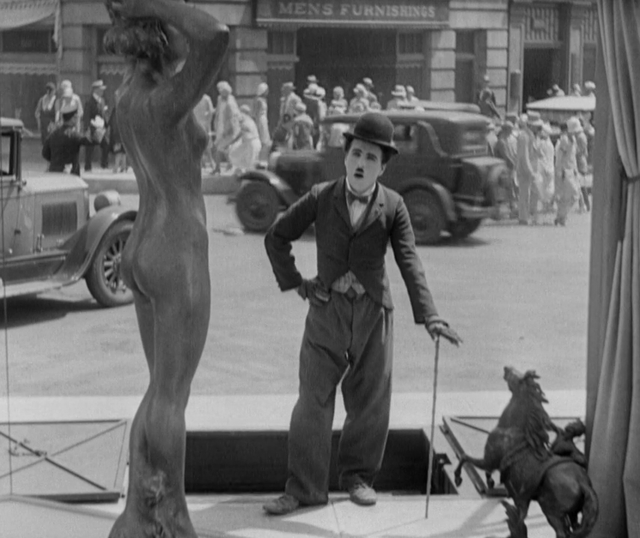 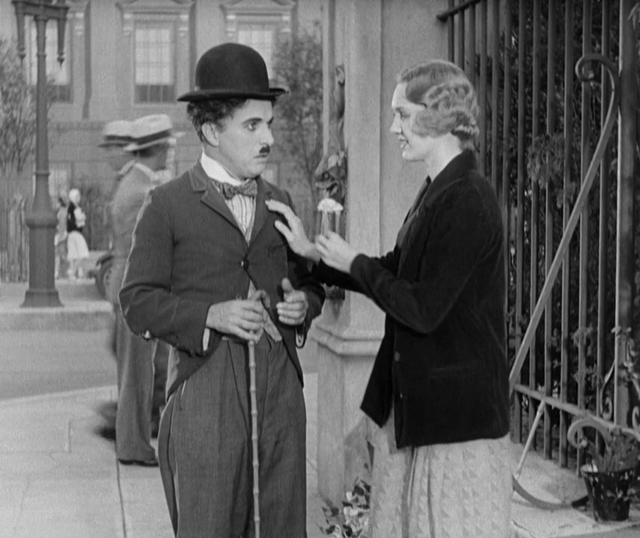 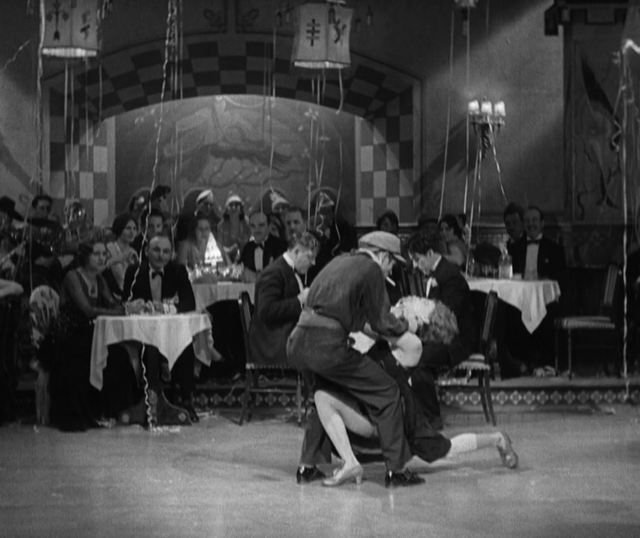