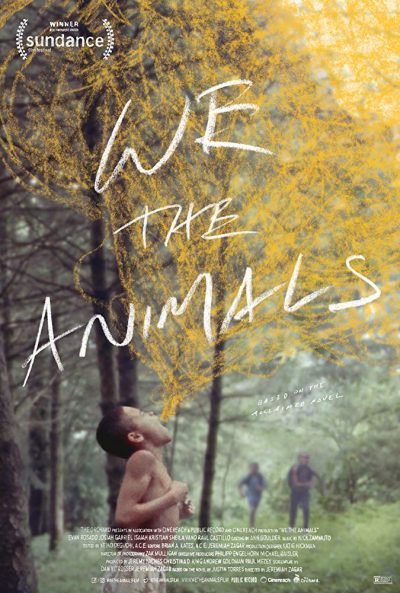 Quote:
Early on in “We the Animals,” a film adaptation of Justin Torres’ celebrated semi-autobiographical novel, there’s a devastating break in the poor-but-happy family mood set up thus far: The father, known as Paps (Raúl Castillo), beats up Ma (Sheila Vand) and disappears. Ma takes to her bed and neglects her children. The three brothers, Manny (Isaiah Kristian), Jonah (Evan Rosado) and Joel (Josiah Gabriel) run wild, stealing food from nearby gardens and stores, rattling around the town completely unmonitored. When Paps suddenly returns (it’s hard to tell how long he was gone), and he and Ma have a passionate reunion, it’s suddenly clear that the violence wasn’t a break. Instead, it was part of an ongoing cycle of abuse and reconciliation. The brothers ride the wave of their parents’ volatile relationship. This is all seen from the perspective of 10-year-old Jonah, and director Jeremiah Zagar uses a mixture of documentary reality and high-flung poetry in his approach, giving us a visceral sense of being there, in that house with those people.

Paps is Puerto Rican and Ma is Italian. Both hail from Brooklyn, although they live in Utica, in upstate New York. They are transplants into a working-class mostly white world, although the potential issues with this are mostly unspoken. Ma works in a brewery and Paps is a security guard working nights. A couple of other characters show up, Paps’ boss, the farmer next door who catches the boys stealing vegetables from his garden, and Jonah’s pimply crush who spends his life watching porn in his room and listening to Iron Maiden (“Who’s she?” asks Jonah). But other than that, there are no characters outside the family. We don’t see the boys going to school, or interacting with friends. The family is all.

The “we” in “We the Animals” are the three brothers, barely individualized at first. They are often all in the same frame at the same time, curled up in their bed together, staring out the window, running through the forest. They are mostly shirtless, their bodies silhouetted against the sun, like identical black paper cut-outs. When we meet up with the family, the brothers are already seasoned veterans in surviving their parents’ unpredictable relationship, as it whipsaws between rage and tenderness. Paps can be a charismatic charmer. Ma can be funny and kind. Soon all is well again. Until it’s not. Henry James’ What Maisie Knew is told from the perspective of a young girl, used as a pawn in the divorce of her narcissistic parents, and “We the Animals” operates in the same territory, keeping very close to Jonah’s point of view, the youngest brother. We see what he sees, but we also see how he sees. Often what he sees doesn’t make sense to him since he’s only 10 years old (did he really see Paps dig a grave in the back yard? did he really see Ma jump into that grave?). He’s starting to have sexual feelings, but he doesn’t know what to do with them. Sometimes his fantasy life bleeds into reality. We are in his headspace.

At night, Jonah crawls under the bed with a flashlight to scribble in a notebook, creating illustrations in colored pencils. Sometimes his drawings spring into life (the animated sequences were created by Mark Samsonovich), black scratchy figures erupting into the air, spewing red lava, sprouting wings out of their back. These illustrations are sometimes scary, always filled with feeling. You can see why Jonah hides them.

Justin Torres’ novel is just 144 pages long, made up of fragmented scenes detailing the rambunctious activities of the brothers, their shared rituals and traditions of play. Taking place in the 1980s, these kids know how to combat boredom (throwing rocks at passing cars is just one example). Daniel Kitrosser and Zagar adapted the novel to the screen, and Torres was heavily involved in every step of the process. One of the choices made was to condense the book’s timeline. What took place over a couple of years in the book now takes place in what appears to be about a 6-month period. The film’s new timeline creates a pressure-cooker atmosphere, which works, but we lose Jonah going from little boy to young man, how painful and prolonged the process is to wrench free from the “we” into an independent “I.”

Zak Mulligan’s cinematography gives the images a tactile immediacy. You feel you can almost touch the boys’ skin, the mud, the colored pencils indenting the paper. Even the light has texture and depth. The images themselves—the feel and look of them, along with Nick Zammuto’s dramatic score, are so much a part of how “We the Animals” actually works, it’s hard to separate them out to examine other story elements. Shot on film, there’s a thick grain on the screen, and this creates a multi-layered nostalgia. “We the Animals” is about childhood, but the nostalgia here isn’t for some golden glowing past. The film shows childhood as chaotic and painful, but also sometimes really fun. Zagar, whose background is in documentary film-making and editing, plays to his strengths: he keeps the structure loose for the most part, leaving space for inference and suggestion.

With barely any credits among them, the children playing the brothers lack the precocious practiced energy of some child actors. Their responses are spontaneous, their bond is palpable. Zagar has done extraordinary work with these children. Raúl Castillo, familiar to audiences from his work in television (a regular on “Looking” and “Atypical”) is the center of attention, a magnetic man teaching his kids salsa dancing, a passionate lover to his wife, but also a threatening bully. What could have been a stereotype is not in Castillo’s hands. It is a sensitive and courageous exploration of a man who cannot control his impulses, who creates an atmosphere of terror in his family, a manipulator who can turn tender in a heartbeat. Sheila Vand, who made a big splash in “A Girl Walks Home Alone at Night” playing the Farsi-speaking chador-wearing vampire, is completely believable as an Italian Brooklyn girl who wonders what the hell happened to her life. Her sons never know what they’re going to get when they approach her (in one shocking moment, she throws a bowl of hot soup at Manny).

Jonah’s dreamlike voiceover calls to mind Terrence Malick’s use of the same device, and not in a good way, and some of the stylistic choices (Jonah’s flashbacks to almost drowning in the river one time) are overplayed, the score blaring like something from a horror movie. Some of “We the Animals” feels overblown, pushed. But still, the manipulation is minimal. Any potential sentimentality is obliterated by the film’s tone and by the performances. It works best when it’s most impressionistic. Although the big events in life have the most impact (you wonder what on earth is going to happen to these three boys), it’s the small things—the early morning light, the tall grass, the black flowing river, Ma’s smudged mascara, Paps’ dazzling grin—that we really remember.