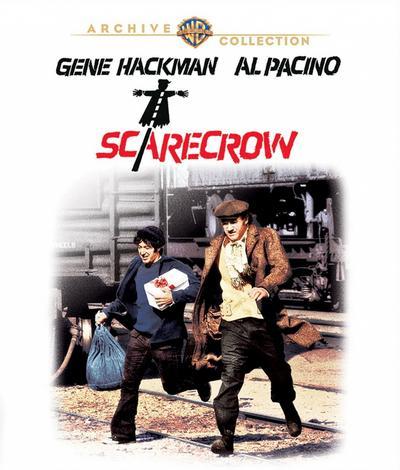 Quote:
Max, an ex-con drifter with a penchant for brawling is amused by Lion, a homeless ex-sailor, and they partner up as they head east together.

Quote:
Scarecrow tends to get lost in the shuffle, overshadowed in the filmographies of its stars, Gene Hackman and Al Pacino, by New Hollywood juggernauts like The French Connection and The Godfather. At the time of its release, Scarecrow was considered a commercial flop, and was shortsightedly written off by many critics as just another rambling buddy/road movie in the register of Easy Rider—though Robin Wood was typically perspicacious about the film’s warmth and investment in character. Yet the passing years have proven Scarecrow’s continuing appeal as a low-key character study, a downbeat ode to the downtrodden, an elegy for the American dream gone sour. Director Jerry Schatzberg and DP Vilmos Zsigmond craft a visually rich and evocative film as attuned to the rhapsodic vistas of the American pastoral as it is to the squalid dive bars and inhumane work farms that provide the grungy backdrop for screenwriter Garry Michael White’s loose-limbed drama. Where The Panic in Needle Park, Schatzberg’s previous collaboration with Pacino, had been intensely focused and almost entirely circumscribed by its eponymous Upper West Side locale, Scarecrow embraces sprawl of both the narrative and geographical variety with freewheeling abandon.

Clownish Francis (Pacino) and burly, temperamental Max (Hackman) encounter each other trying unsuccessfully to hitch a ride along the winding two-lane blacktop of rural California. The landscape is straight out of John Steinbeck, with its rolling grassy hills and lowering stormy sky (the indelible opening shot alone is worth the price of admission). The characters’ interaction plays like cut-rate Samuel Beckett, somewhere between slapstick and existential estrangement. Francis has been “at sea” in the Navy for five years after running away from his pregnant wife in Detroit, while volatile Max is fresh from a stretch in San Quentin. Like the title character in Nathaniel Hawthorne’s “Wakefield,” once these men step aside from their situations in life, they become “outcasts of the universe,” their dreams as tenuous and out of reach as their respective destinations. Francis carries around a gift-wrapped package meant for the child he’s never seen. Max yearns to open a car wash in Pittsburgh, filling entire notebooks during his prison stint with painstakingly annotated facts and figures.

For much of Scarecrow’s running time, the filmmakers seem content to let Hackman and Pacino burrow deep into their characters, with the result that both actors deliver career-defining performances. On the other hand, White’s script blunders at times into typical newbie-screenwriter traps—for instance, by rendering the title metaphor far too manifest. Francis’s spiel about the scarecrow as laughingstock is meant to embody his life philosophy, his habit of defusing tense situations with buffoonery, but the whole scene is exaggerated and its point reiterated until it’s been run into the ground. Despite this overplayed hand, both the actors and the film regain their footing as Francis and Max careen from episode to episode, each vignette a micro-study in behaviorism with little in the way of connective tissue, until they arrive in Denver, where Max’s sister, Coley (Dorothy Tristan), lives. Life with Coley and her friend, Frenchy (Ann Wedgeworth), who takes an immediate shine to Max, offers them a chance to put down roots again and reestablish something resembling a conventional existence. It’s an opportunity that Max, with his violent proclivities, soon spoils, landing both of them in the county work farm. When Francis falls in with a shady trustee (played by perennial movie villain Richard Lynch in his first role), the ensuing brutality paves the way for future exploitation and victimization.

Even a film as resolutely peripatetic as Scarecrow eventually must be headed somewhere, and so White contrives a confrontation between Francis and his ex-wife, Annie (Penelope Allen), that leaves Francis reeling from her mendacious pronouncement about their kid. The imposition of these apparently obligatory third-act histrionics inevitably feels shoehorned; Francis’s subsequent outburst at Detroit’s Belle Isle fountain is kept from ringing hollow only by the rigorousness of its staging and the purity of Pacino’s performance. In the end, Schatzberg arrives at a wonderfully apt parting shot: a moment that perfectly encapsulates Max’s feelings of frustration in a gesture of impotent protest. The goddamn crows may indeed be laughing, but the abiding tone of Scarecrow is far from comedy; it’s one of irremediable and inconsolable loss.