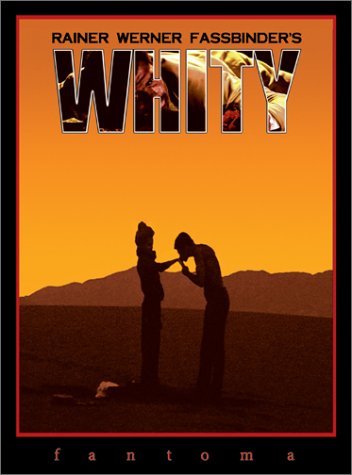 From “Three Film Buffs”
Whity is a strange but beautiful movie. It is a German language western set in 1878. The only time any English is used is during the songs sung by the saloon whore who performs like she’s in a cabaret in Berlin in the early 1930’s. It was shot in Spain on the sets of Sergio Leone’s spaghetti westerns starring Clint Eastwood.

The bizarre story (believe me this is unlike any western you have ever seen) centers on the title character – real name Samuel King – the bastard son and slave to the wealthy Nicholson family. The father is a sadistic son of a bitch whose favorite form of punishment for his grown-up sons is a buggy whip. In one scene Whity willingly steps in for one of his brothers and takes the beating for him.

The other members of the family keep begging Whity to kill their father (or husband whichever the case may be). Otherwise they pass the time by regularly humiliating Whity. All except for the youngest brother. He’s a bit special. He and Whity have a much more physically intimate relationship. Whity’s mother is also a family slave. She’s the cook.

Every so often Whity steals some time for himself and pays a visit to his gal at the local saloon. She’s the singing hooker with the heart of gold and she wants Whity to go East with her.

I won’t give away the ending to this one but believe me it’s suitably strange. But not in a makes-no-logical-sense-David-Lynch sort of way. It has a cohesive plot. One thing you can say about this movie – love it or hate it – is that it succeeds at being what it was trying to be.

Normally I’m not a big fan of the art for art’s sake school of moviemaking. But Fassbinder’s Whity is one example that I love. It works because the story is so far out-there, especially for a western, that it allows you to focus on the cinematic pictures while still making enough sense to hold your attention. Also it helps that Whity is such a unique hero and that Günther Kaufmann gives a great performance.

As art every shot is sublimely thought-out and executed. The camera work is fluid and dreamy with many long takes. Fassbinder’s eye for color rivals Vincente Minnelli’s. He shoots his star like he’s Cary Grant. Clearly this was a director in love with his leading man. And no wonder. Günther was hot, not to mention a truly magnetic presence in front of the camera.