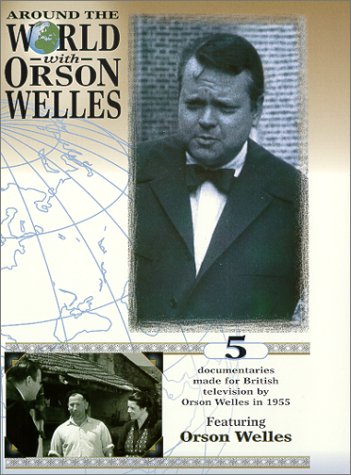 “Around the World with Orson Welles (1955) is a series of 26-minute TV documentaries, made for British television. Five of the episodes survive, and have been collected and released on a DVD. Welles compared the series to home movies. This is a bit misleading. There are travelogue sections shot silent, edited together with narration by Welles – segments that do resemble in form the average person’s vacation films of the era. But there are also extensive synch sound interviews with people Welles meets in his travels. These parts are a bit like a talk show, although they are generally set on locations where the person lives, rather than in a studio. In general, Welles resists “voice of authority” narration here, and tries to disguise his comments as elements of conversation with another character. Welles will also frequently show the camera, microphone, and the camera crews filming. It is part of the spectacle. 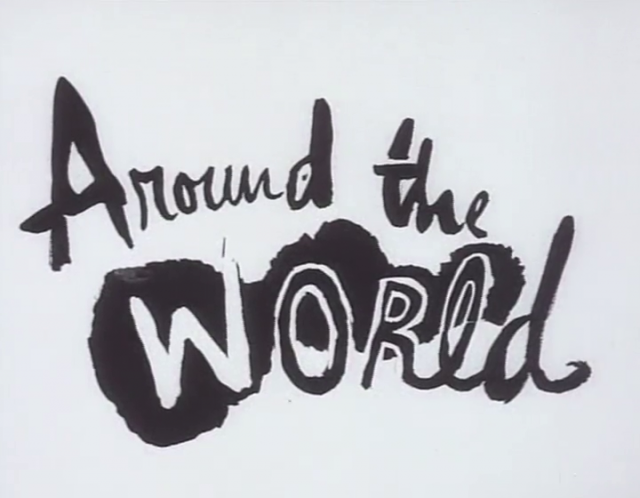 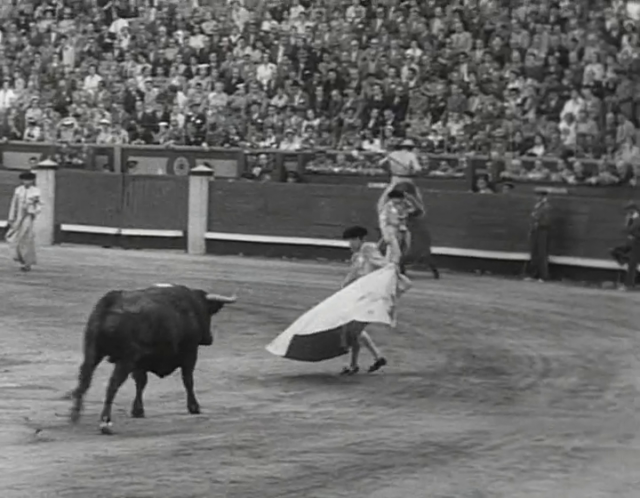 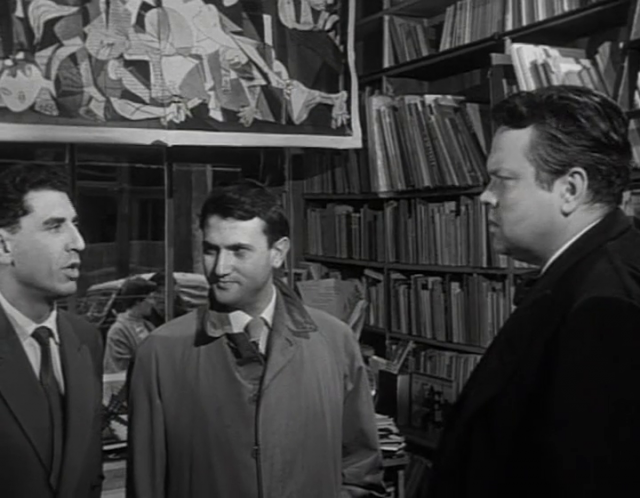 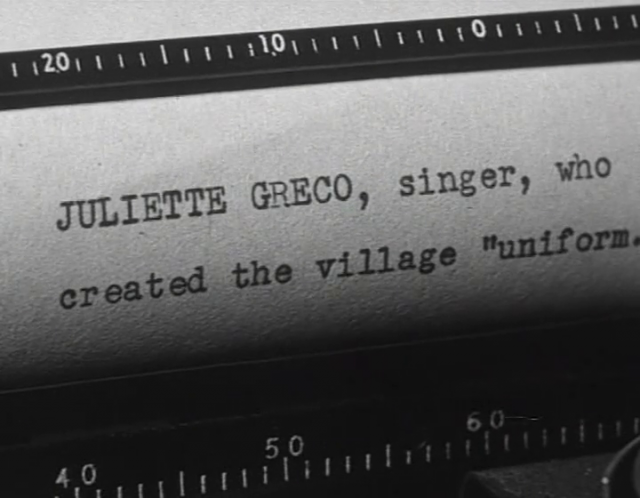 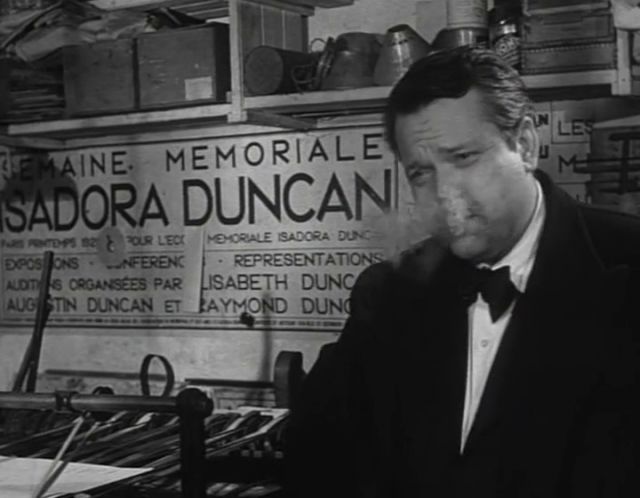 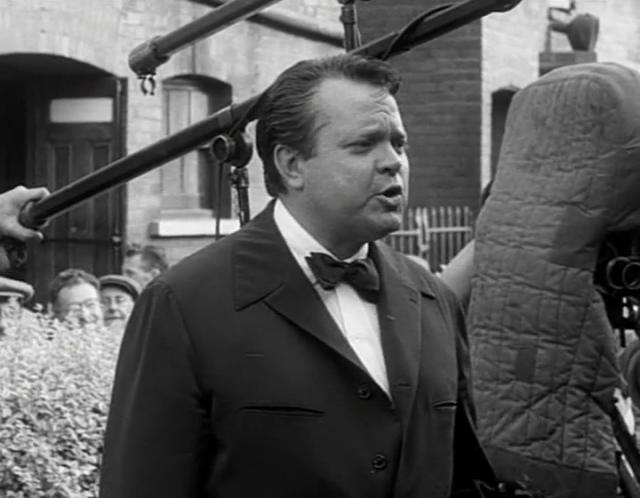 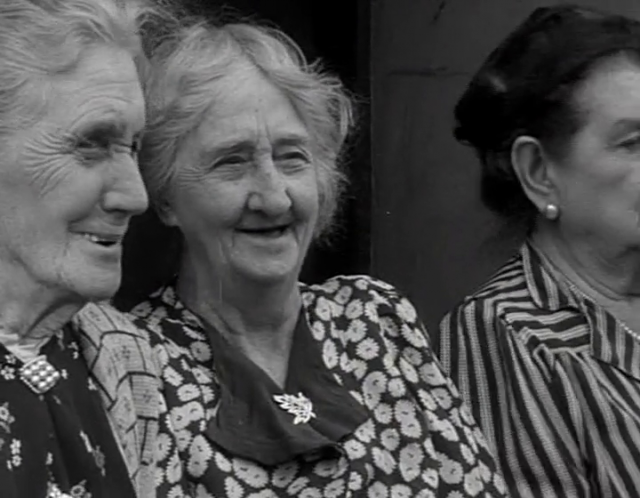 The best of the series is the one dealing with an intellectual neighborhood of Paris, St.-Germain-des-Près. This features a long interview with Raymond Duncan, an eccentric American artist who was a long time resident. Duncan has a philosophy of doing everything for yourself, and is a craftsman who makes everything from his own printing press and type fonts, to the clothes he wears. It is hard not to compare this to Welles himself, and his do-it-yourself movies. And while Duncan’s clothes are extremely unusual, Welles would spend much of his later years in costumes such as long capes and floppy bow ties, that were also both “artistic” and unique. Duncan’s other major personal philosophy, never to imitate others or be a conformist, but always to stretch out in one’s own direction, could also serve as a credo for Welles. So we are getting a philosophical statement of Welles’ own life and beliefs here, as well. Duncan is an articulate man with a rich, resonant voice and a love of Shakespeare, also like Welles himself.

Duncan’s authenticity serves as the direct opposite of all the swindlers and forgers to come in F for Fake (1973). He is an artist who represents the antithesis of these painters who use their skills to deceive. Both Welles documentaries have an artist at their center, both take place at least partly in France, both make philosophical statements about authenticity, both include Welles’ on-screen presence, both show celebrated French historical buildings and landmarks, both have real intelligentsia filmed, both show scenes of evening life and the French having after hours fun, both show French trains in stations from the outside. Picasso’s drawings of bullfighters are discussed in a later episode of Around the World with Orson Welles; a story about Picasso is dramatized in F for Fake.

There is a party atmosphere to this film. Everyone from Art Buchwald’s secretary to people on the street look as if they are enjoying being filmed.

The other episodes are not quite as good. Perhaps this simply reflects my own prejudices: films about artists such as St.-Germain-des-Près have always fascinated me. Plus it is hard to resist a portrait of Paris and its intellectual life.

The episode has “intertitles” in the form of brief statements being typed on a reporter’s typewriter. These newspaper scenes recall Citizen Kane. They also give a silent movie feel to the episode.

St.-Germain-des-Près: The Pan up the newspaper building

The pan up the newspaper building, the real Herald-Tribune in Paris, is a “Welles shot”: a moving camera work that creates a series of compositions-in-motion, based on the complex architecture of the building. In a small, much shorter way, it anticipates the famed moving camera opening of Touch of Evil, to be made the next year. Welles first pans upward, then executes a complex lateral turn. The opening camera movement in Touch of Evil also involves shifts of direction, also in 90 degree turns.

In St.-Germain-des-Près, Welles will have sound-poets give demos of “letterisme”, a sound-based art movement of the era. In the later episode, Pays Basque II (La Pelote basque), we will hear the unique long-distance cries of Basque pigeon-netters, and the musical score-keeping announcements during games of pelote. This interest in unique forms of vocal expression perhaps derives from Welles’ background in radio.

Welles also includes much about music and dancing in both films. Both films celebrate cultures where intricate dance steps play a major role in ordinary people’s entertainment.

Madrid Bullfight and Pays Basque II (La Pelote basque) focus mainly on sports: bullfighting and pelote. Both sports emphasize physical dexterity, and complex movements of the whole body. In this they resemble the dancing that plays a role in both St.-Germain-des-Près and Pays Basque II.

These two sports episodes are the closest in the series to conventional travelogues or documentaries. Both are quite absorbing to watch, and both have a great deal of visual style. Neither quite reaches the level of St.-Germain-des-Près, but both make gripping viewing.”