A hilarious romp that turns topsy-turvy the old Hollywood standards of female sexuality and pleasure, Three Examples of Myself… brings together three fantasies of how women would run things if they were on the throne of power. Remixing fluffy musical numbers with a definite feminist twist, director Biller creates a rebellious coquette for the 90’s–a kind of Sandra Dee meets Madonna–as she rules a harem in the Arabian Nights, rules over a hiveful of submissive drones, and even finds sexual liberation in the disco era. With a scoreful of delightful musical fantasies, the film delivers a magical twist to the notions of visual pleasure. With lyrics like “She is fertile, she is nice–She gives us good advice. She is everything we need!”, you simply can’t go wrong. — New York Asian American Film Festival 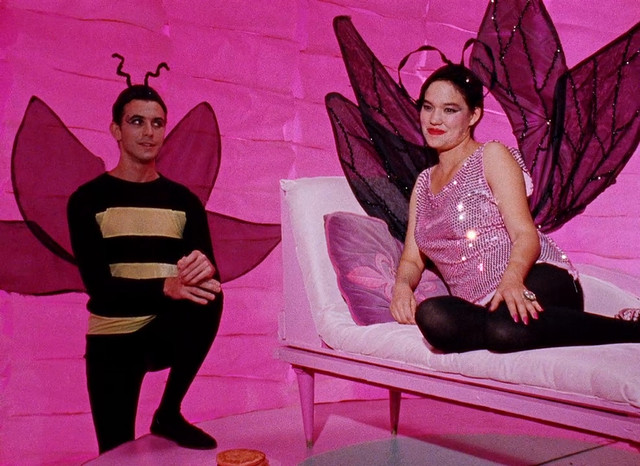 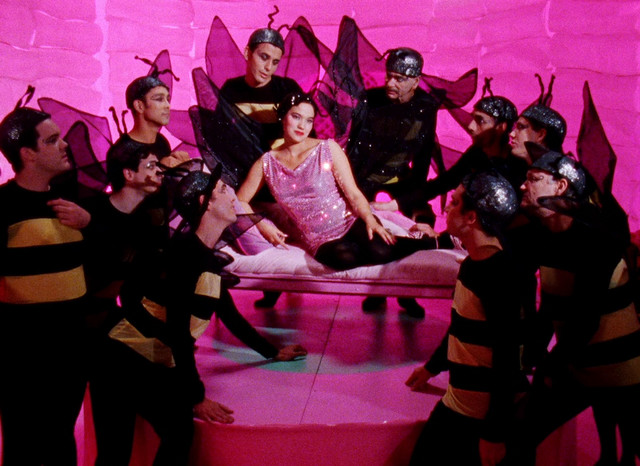 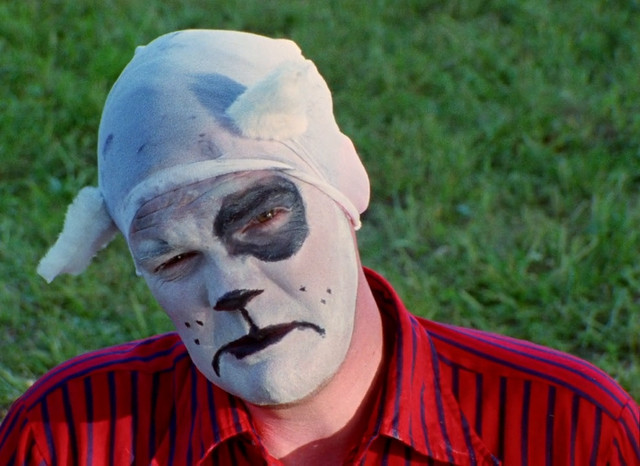 LOS ANGELES TIMES
Anna Biller’s Three Examples of Myself as Queen is an endearing camp travesty musical. Sweet, funny, with marvelous costumes, sets, and even quilts designed and constructed by Biller, a kind of innocent homage to Maria Montez with color and decor worthy of Kenneth Anger. –Kevin Thomas

ARTFORUM, “BEST OF 1994”
Meanwhile across town, the small, embattled literary-arts center Beyond Baroque was screening a short film by newcomer Anna Biller,Three Examples of Myself as Queen. A fairy-tale adaptation of feminist realpolitik, the film’s humor and graceful perplexity may not have caused any shifts in the local faultlines but did crack a glorious smile on this audience member’s face. –Lane Relyea

THE AMAZING WORLD OF CULT MOVIES
Three Examples of Myself as Queen, 1994. In these days when every nostalgic pop-culture reference seems to come with its own implicit quotation marks, it is refreshing to see nostalgia as deliciously unironic as this 26-minute short from indie filmmaker Anna Biller (The Hypnotist). Filled to the brim with lushly saturated Technicolor photography, wonderfully high-camp sets and costumes, and some deliriously silly concepts, Biller’s film is a throwback to the early underground of Kenneth Anger and Jack Smith, worshipping old Hollywood with simultaneous deconstruction and unabashed homage. The first segment, “The Sad Queen,” is reminiscent of such lavish ’50s musicals as The King and I, with Biller as an ennui-struck monarch speaking in French to an Indian raja trying to cheer her up before her female attendants burst into a song that does the trick. “Queen Bee” has Biller lording over gay bees in a tent before moving into a glamorous all-pink hive straight out of “Diamonds Are a Girl’s Best Friend,” while “Queen Poinsettia” begins as a late-60s exploitation film and ends as a fairy tale. Biller and a friend attend a mod party which almost turns into a gangbang before her tormentors turn into dogs, a princely hero shows up on a white horse, and Biller is transformed from go-go chick to princess, heading off to an enchanted castle as this wonderfully grin-provoking exercise comes to a close. Biller has points to make, to be sure, and introduces some interesting subtextual examinations of feminism, but never lets her modern sensibility detract from that historical sense of goggle-eyed Hollywood wonder. For those viewers enervated by too many grim, petulantly nihilistic shorts, Three Examples of Myself as Queen is just the ticket to learning to smile at underground cinema again.–Robert Firsching

Anne Charlotte Robertson – Talking to Myself (1985)