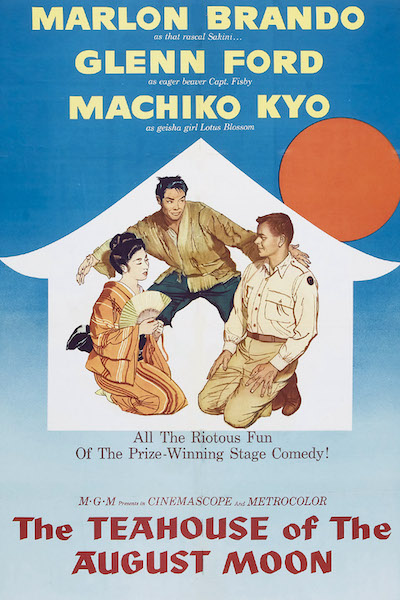 Teahouse retains the basic appeal that made it a unique war novel and a legit hit. There is some added slapstick for those who prefer their comedy broader. Adding to its prospects are some top comedy characterizations, notably from Glenn Ford, plus the offbeat casting of Marlon Brando in a comedy role.
In transferring his play based on the Vern Sneider novel to the screen, John Patrick has provided a subtle shift in the focal interest.
Deft screenplay provides an interesting fillip in retaining the stage device of a narrative prolog and epilog by Brando and the warmly humorous verbiage has been left intact. Story line also is unsullied as the film unspools the tribulations of Ford, the young army officer assigned to bring the benefits of democracy and free enterprise to the little Okinawan town of Tobiki.

The role of Capt Fisby represents a romp for Glenn Ford, who gives it an unrestrained portrayal that adds mightily to the laughs. Brando is excellent as the interpreter, limning the rogueish character perfectly. Physically, he seems a bit too heavy for the role.

Japanese actress Machiko Kyo is easy on the eyes as the geisha girl and there is excellent support from Eddie Albert, who sparkles as the psychiatrist who yearns to be an agricultural expert.