Greta: 40, an architect, mother of a 12-year-old son, separated from her husband, recently unemployed. She starts working in a call center but is soon dismissed once again. She does everything in her power to keep hanging on in there, starts drinking and drifts through the city, torn between the pressure to confirm and the spirit of contradiction.

Press Coverage
Eine flexible Frau (The Drifter) represents a remarkable sign of life in contemporary German cinema. Tatjana Turanskyj’s feature debut is an Abschied von gestern (Yesterday Girl, 1966) for the globalisation era. It trails Greta M. (played by Mira Partecke), an unemployed architect on the verge of a nervous breakdown, through a series of absurd encounters in the capital. She divides her time between job centres and call centres, outmoded cafés and hypermodern townhouse developments. Earnest in her wish to work again, she is stymied by the hypocrisies and vocabularies of the new economy. She is schooled in mellifluous platitudes (“pragmatic utopian architecture”) and not allowed to be “unemployed”, but rather “looking for a new challenge”. (…) As an agent for the film’s overall concerns, Greta pursues a psychogeography of the new Berlin. This eludes her, if not us: the city is seen, literally and figuratively, through tinted lenses. Greta’s oversized shades reflect the capital’s new class of attractive urban professionals and fragmented prospects of gated townhouse communities. Through these semi-privatised streets (“surveilled, but ecologically correct!”) and the clans that dwell in them, Turanskyj lays bare the traditional (West German) gender dynamics in action behind the hip Prenzlauer Berg idyll and entertains the possibility of material existence and connectivity in an increasingly conformist society. (Senses of Cinema, Mattias Frey) 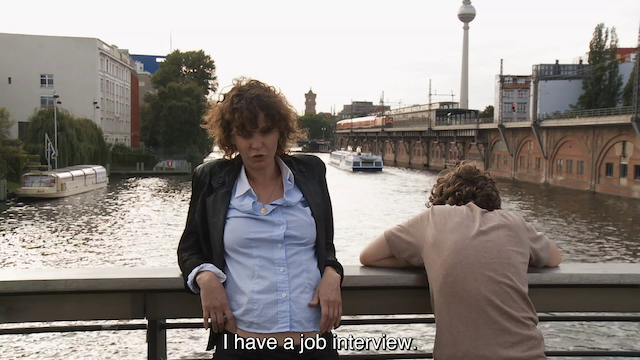 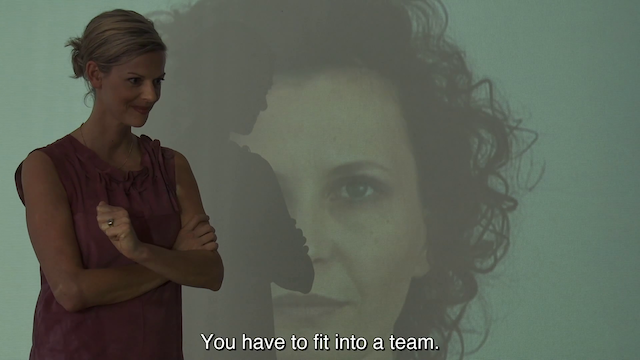