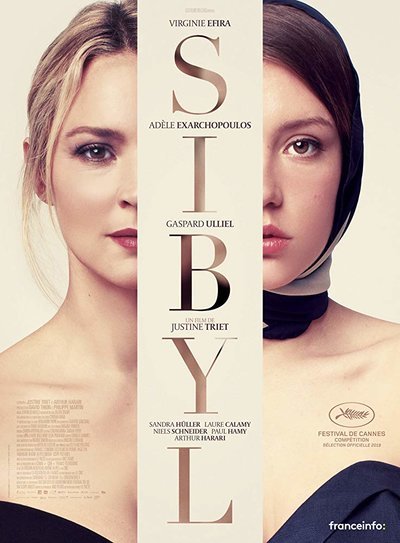 Quote:
The title character in Sibyl (Viginie Efira) weaves herself a web of bedlam, not admitting that she has ensnared herself for the majority of the film. Her toxicity spills over into people’s lives. By willfully absorbing other people’s lives and allowing their troubles to fester her long existing issues, she’s in for a mess. Not to mention, said people ensnared in her web had already weaved their own toxic webs, now tangling in hers.

French psychotherapist Sibyl is setting off to write her book. One day, she receives a call from the tear-stricken Margot (Adèle Exarchopoulos), an up-and-coming movie star in the midst of a difficult decision: She’s deciding whether to abort her pregnancy, a result of an affair with her famous costar, Igor (Gaspard Ulliel) before a film shoot. Not to mention, Igor has been in a long-term relationship with said film’s director (Sandra Hüller).

Sibyl does the unthinkable and commits an ethics breach: She provides therapy to Margot but records their conversation and transforms Margot’s story into soap operatic beats for her fiction. Margot’s story is too enticing to Sibyl, not to mention it seems to resemble Sibyl’s own relationship woes. Soon, Margot’s emotional needs surges. The patient is unsure what decision she needs validated and Sibyl uneasily tries to guide Margot’s heart. But Sibyl becomes swept into a chaos so maddening that it exacerbates Sibyl’s angst over a past relationship and her alcoholism.

Hilariously, matters escalate to the point where Sibyl is summoned to Margot’s film shoot and assumes the role of an unofficial on-set therapist, directing Margot, even having to sing and direct a romantic scene between two estranged co-stars. How Sibyl is whisked into those scenarios sound inexplicable on paper yet are believable due to director Justine Triet’s staging—and anyone who has been on a film shoot can recognize these on-set desperation rings true.

Triet’s direction humanizes its female players in their overwrought outbreaks. Exarchopoulos is the rawest and reddest in Margot’s anguish. But special mention goes to Huller, with a smug Cate Blanchett mien, who steals every scene as a prima donna director whose soul has been sucked due to the personal mess, her sanity waning by the hour. She seethes with contempt as she furnishes her wavering commitment, ordering her players around, bewildered by the revelation of her relationship betrayal. He inexplicable rationale of enabling her boyfriend’s affair with his co-star is a riotous piece of dialogue, not just because of the denial but because it’s alarmingly believable in how someone might try to consolidate that which cannot be consolidated.

Sibyl renders itself a funny-to-riotous-to-heartwrenching viewing experience. Across rib-cracking production nightmares, eroticism, and drab sessions of Sibyl counseling a child, and breakdowns, sometimes the movie tries to assemble fragments that don’t tonally gel. Overall, Sibyl is a tense portrait of a woman who can no longer fake dignity or functionality. By the end, Sibyl completes her project but still has to live with the shatterings that can’t be reassemble.