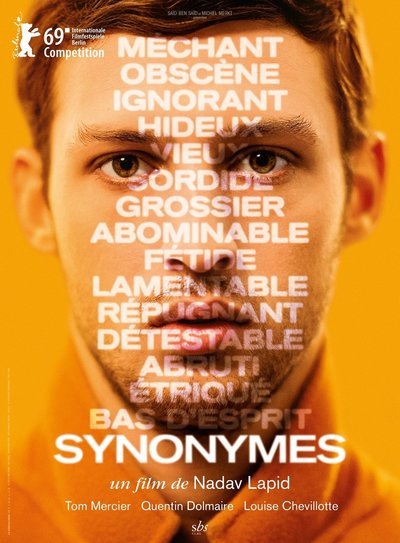 In his first screen role, Tom Mercier plays Yoav, a disaffected young Israeli who flees Tel Aviv for Paris to start a new life. Desperate to erase his origins, Yoav sees becoming French as his only hope for salvation. He constantly consults his dictionary in an effort to stop speaking Hebrew, but finds working at the Israeli embassy is a distraction. Preparing for the French naturalisation test also has its pitfalls, while the young couple he befriends have some strange ideas about how to help him. Based on writer-director Nadav Lapid’s own experiences, Synonymes explores the challenges of putting down roots in a new place, as Yoav’s attempts to find himself awaken past demons and open up an existential abyss…

David Ehrlich on IndieWire wrote:
All of Lapid’s cinema – even his less explicitly hostile The Kindergarten Teacher – reflects a certain strain of Israeli militarism, but Yoav is the living personification of that impotent rage. He’s a volatile mess of unspent manhood, desperate for freedom but conditioned for war, and Mercier’s hypnotic performance makes the character seem as though he’s got one foot stuck on a landmine and the other flailing about in search of solid ground. Here is an actor capable of possessing a movie, like Daniel Day-Lewis or Denis Lavant, and a movie as episodic and unmoored as Synonyms is only sustained by the tension Mercier brings to every scene…It may seem like an impertinent thought in the midst of a global refugee crisis, but Synonyms translates Yoav’s dilemma into an unshakable portrait of a man whose passport only gets him so far, who’s grown tired of carrying the baggage that comes with being an Israeli, and who’s driven to the brink of madness by a world that forcibly identifies people by the place they were born. Lapid’s film is too fresh and intransigent to know how well it will age over time or hold up to repeat viewings, but on first blush it feels like a powerful howl that’s hard to hear clearly, and harder still to get out of your head.