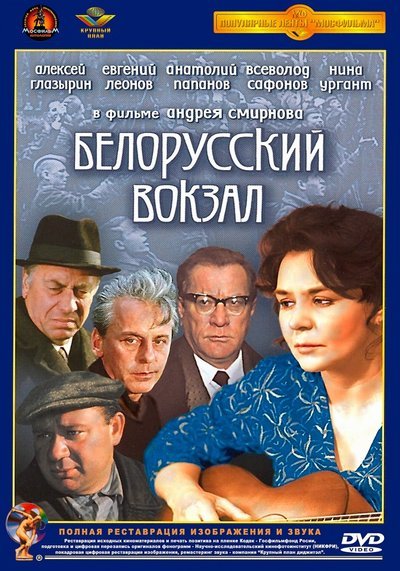 Quote:
A sympathetic, emotionally persuasive drama describing the friendship of four World War II veterans, their sudden reunion after 25 years and the subsequent effect of this occasion upon their thoughts and evaluations of the past and present. In a way, The Byelorussian Station is reminiscent of the poignant, realistic look at the returned soldier remembered in Wyler’s The Best Years of Our Lives. In this film, however, the sentiments are leavened by reminiscence and a touch of remorse, and the spectator must be prepared for a deeply moving cinematic adventure. Four friends, former front-line soldiers, meet again at the funeral of their old commander. Their shared mourning mingles with the joy of seeing one another again and, for a time, they forget the years of separation. However, the years soon make themselves felt as the men notice their age and changes in character, the different sorts of lives they have led. One has become the director of a large factory, another works as a repair fitter, while the other two are an accountant and a journalist, respectively. Gradually, the film illustrates what common bond exists between them besides memories. The director, Smirnov, concentrates intently upon his myriad personalities, and the reactions of these masculine, emotionally restrained characters illuminate, with humor and humane recognitions of universal behavior, the flexible boundaries of comradeship-in-battle and the rarity of sustained friendships kept alive by choice rather than by chance. An unexpected incident occurs that brings the four men together, working toward a common purpose—a young worker has an accident, receiving an electric shock while on a utilities job. The old veterans are reminded of their aid to each other’s wounds during the war, and the film reverts to the dreams they held just as they were returning home. The conclusion is spellbinding, including some documentary footage showing the welcoming of soldiers of the Byelorussian Station by their families—the whole truth is in these images, the truth of recollected pain and joy felt by anyone who has waited, searching for one face in a military crowd, not knowing which of these emotions will last forever.